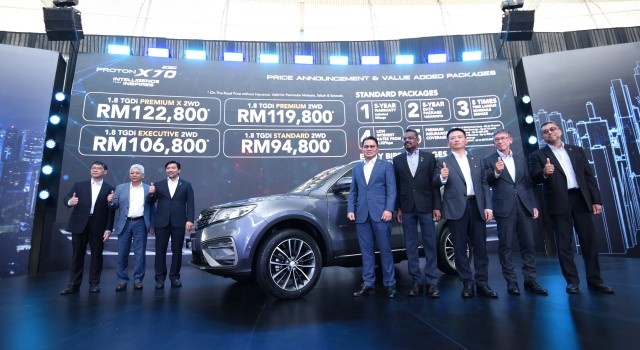 After much anticipation, Proton has finally launched the locally assembled X70 SUV, with a few subtle yet important changes.

Despite all the hype, there are only a few things that you need to know about the new X70 which is now being assembled in Proton’s plant in Tanjung Malim.

The most important technological enhancement is the introduction of a seven-speed Dual Clutch Transmission (7-DCT) in place of the six-speed Automatic Transmission (6AT) previously used.

With the new gearbox, Proton claims that fuel consumption has improved by 13% to 7.6L/100km, gear changes have become smoother and quicker, and that torque has increased by 5% to 300Nm, resulting in a quicker 0 – 100km/h sprint time (9.5 seconds).

Further enhancing the practicality of the 2020 Proton X70 is the inclusion of a powered tailgate, which is available from the Executive variant. The feature is height adjustable allowing for hassle free access to the boot compartment and is supplemented by a foot sensor for the top-two specification levels. Regardless of variant, the split folding rear seat back now has a recline function to adjust the rake of the rear seats and boost passenger comfort.

Similar to its predecessor, the 2020 Proton X70 is offered in four distinct variants though the line-up has been altered. The Standard variant still kicks off the range followed by the Executive. The AWD Executive has been dropped so the next variant is the Premium with the all-new Premium X topping the range.

In case you’re wondering how to distinguish between the outgoing X70 and the latest one, just look at the Proton logo on the front grille. The new X70 gets the circular emblem with the Harimau inside, replacing the old tiger in the “shield”.

That’s it. Besides these enhancements, things remain pretty much the same as before.

Powering all variants is the same 1.8-litre turbocharged petrol engine which makes 184 PS and 300 Nm of torque.

As with the previous model, a 360 Camera is offered on Executive, Premium and Premium X variants but the Tyre Pressure Monitoring System (TPMS) and Advanced Driver Assistance System (ADAS) suite is only fitted to the latter two.