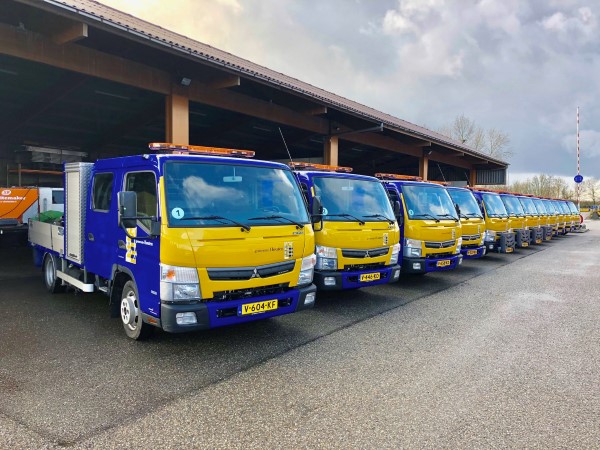 The municipality of Houten, Netherlands, has put twelve FUSO Canter into its municipal service.

“This is the second series of FUSO trucks that we have bought. We already know for ourselves that these are robust vehicles suitable for a wide range of applications”, is how Arie Koning, project manager for the municipality of Houten, explains his purchasing decision.

“Practical experience has proved that reliability and ease of maintenance are the particular strengths of this brand.”

The four Canter vehicles with crewcab, as well as the eight with single cab, have been fitted with platform bodies by a local bodybuilder. The four Canter 3S13 models are also ideally equipped for winter maintenance operations.

As well as the usual tasks demanded of them on public traffic routes, they are also capable of coping effectively with black ice. “We’ve been out spreading salt 33 times so far this year already”, reports Arie Koning.

“The FUSO’s small turning circle means that we can clear the cycle paths in our municipality without any problem at all.”

As well as for winter maintenance, the vehicles will be used for municipal operations such as parks maintenance.

The fuel-efficient Euro VI engines of the FUSO Canter are an important element of Houten’s sustainability concept.

Their low emissions mean that the vehicles are ideal for use in the municipality’s built-up areas.