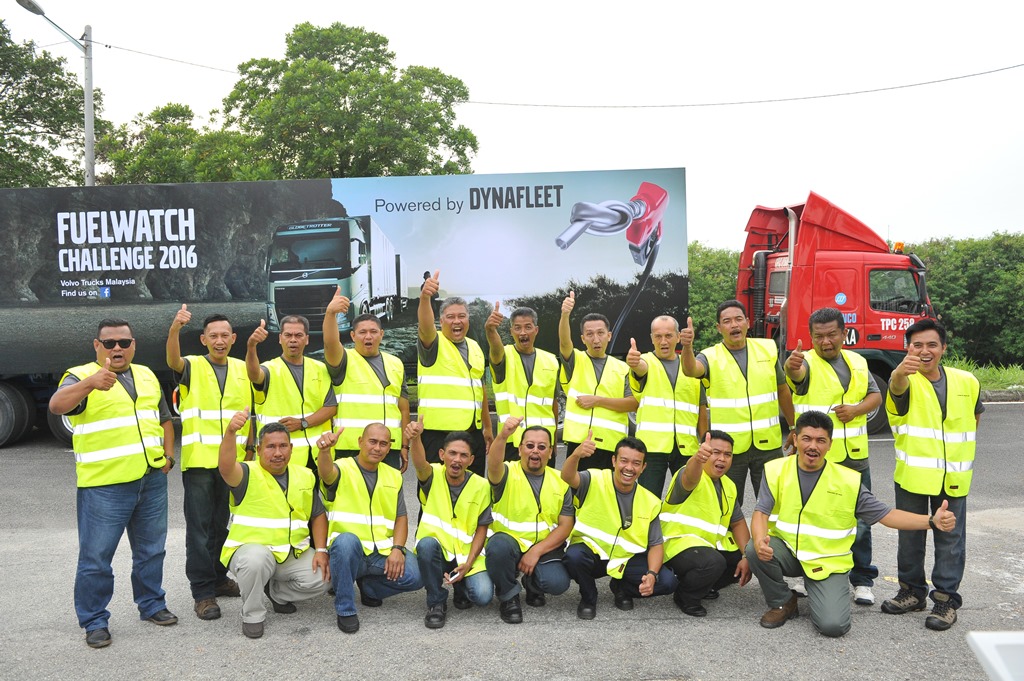 Semifinalists of the 2016 Fuelwatch Challenge by Volvo Trucks Malaysia held an added advantage when they tackled the annual real-time driving competition – expert and personalised advice from the event’s past winners.

Last year’s champion Nor Rahmat Abd Talib, Ahmad Othman (Champion from 2014) and Zamri Abd Rahman (Champion from 2013) shared their know-how and experience with the 19 semifinalists a day prior to the event and after, mentoring them on the best ways to tackle the competition’s driving and fuel efficiency tests.

Their expert tips and tricks paid off in spades for winner Zulkifli bin Saad, who displayed precision, patience and exemplary driving skills in securing bragging rights as the nation’s most fuel-efficient truck driver in what is arguably the most popular competition of its kind in the world. 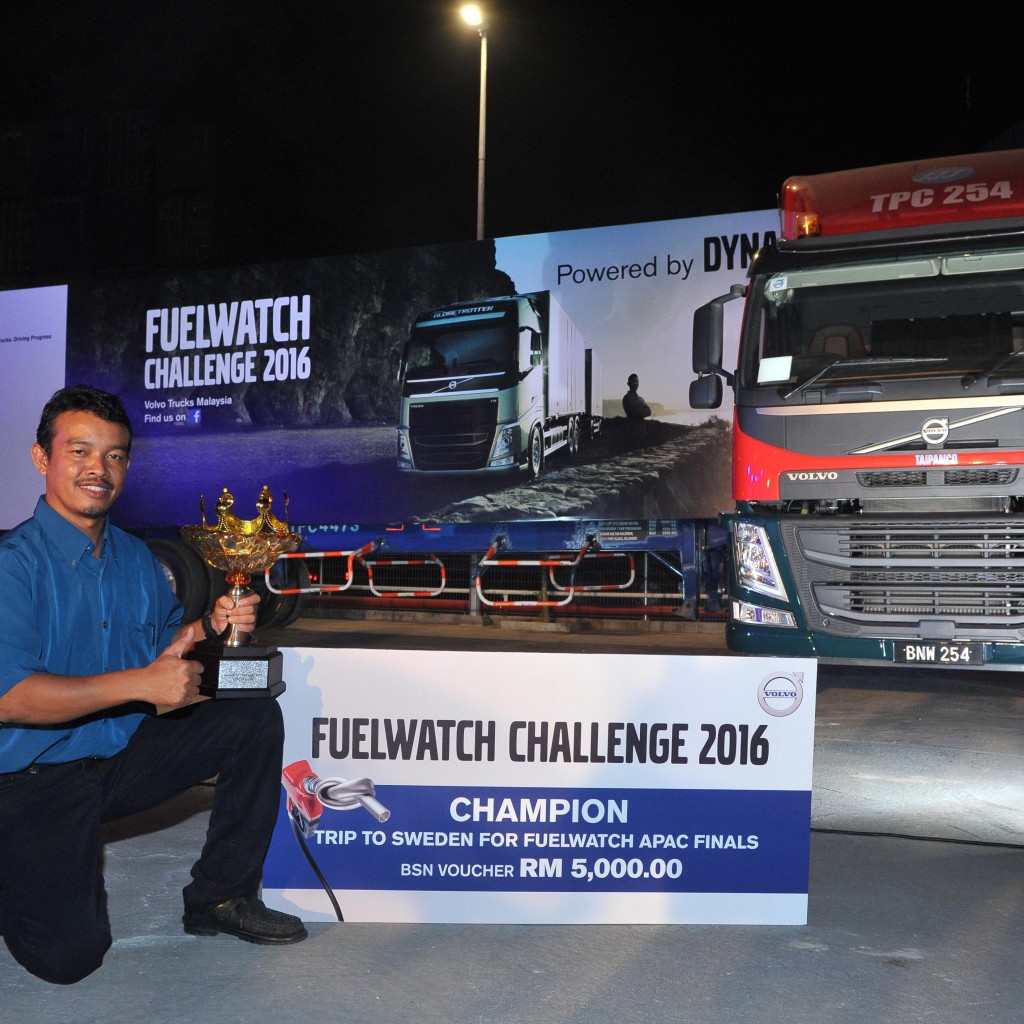 Zulkifli, who works with Prifaria Sdn Bhd claimed the 7th edition of the Challenge by achieving the lowest fuel consumption, clocking 2.83 kilometres with just 1 liter of fuel while carrying a load of 20 tonnes in an FM 440 with i-Shift. He posted a time of 1:07 minutes during the driving challenge covering a total of 40km.

For his efforts, the 38-year-old who currently resides in Penang will not only represent Malaysia at the Fuelwatch Asia Pacific Final in Sweden next month, but also takes home a BSN voucher worth RM5,000 and other exclusive Volvo goodies. In Sweden, he will go head-to-head against other APAC winners to claim the title of the region’s most fuel-efficient driver.

“Winning Fuelwatch Challenge is undoubtedly the highlight of my career behind the wheel,” said Zulkifli. “I have been training hard for this competition, especially on means of conserving fuel, but I don’t think I would have done so well without the advice and knowledge provided by our champion mentors.”

He continued, “The competition had also shown me that every little drop of fuel mattered when it comes to operating costs and achieving great fuel savings. And being a part of this competition, it has further taught me the importance of road safety and how everyone has a responsibility to keep each other safe on the roads. The Volvo Trucks ‘Know Your Blind Spots’ campaign helped me further understand and be more conscious of my surroundings when sharing the road with other users.”

He added, however, that his win had placed a heavy responsibility on his shoulders.

“There has never been a Malaysian winner at the final, but I hope to be the one that flies our flag high,” he said. “I would also like to share the knowledge and skills I’ve picked up with others to help them understand that a fuel-efficient driver is one of the most important factors for both the environment and a company’s economy.”

The decision to introduce past winners as mentors is in-line with Volvo’s Driver Development initiative, a training programme that has fully-competent certified Volvo driver trainers coaching their peers to ensure maximum road safety and efficiency. The programme, which offers learning modules on economical, safety and defensive driving, aims to give drivers the necessary information and skill to use vehicle functions and features in an efficient, safe manner.

Volvo Driver Development also aspires to improve and enhance the career development of drivers with high potential and provide programme-certified drivers the opportunity to train others.

As with its six previous editions, this year’s Challenge looked to increase awareness on the importance of fuel efficiency, promote greater sustainability and lessen environmental impact. It is also geared towards educating drivers, fleet managers, customers and stakeholders on the importance of best practices to reduce fuel consumption and cost as well as boost profitability.

The subscription-based telematics solution streamlines the planning and execution of transport assignments to give companies the opportunity to gauge fleet and driver performance, measure fuel consumption, track location and communicate with individual trucks and drivers via a user-friendly app. Drivers, meanwhile, benefit from the reports generated by the system which enables their companies to highlight development areas as well as tailor make trainings for them.

“The Volvo Fuelwatch Challenge has continuously become a key platform that educates drivers, fleet managers, customers and other stakeholders about the importance of good driving practices. All these lead to improved fuel efficiency, reduced cost and increased profitability, as well as increasing awareness on safety. This year, the Fuelwatch Challenge was different from previous years because drivers were competing in Volvo Trucks fitted with Dynafleet, Volvo’s fleet management system. The system was used to gauge the fuel efficiency of the drivers during the competition. We’ve also a safety campaign with the aim to create awareness among truck drivers and other road users, about the importance of blind spots, especially in the presence of large trucks,” said Law Ah Tiong, Vice President, After Market.

The Fuelwatch Challenge, which receives strong support from Jabatan Pengangkutan Jalan (JPJ), was first introduced to Asia Pacific in Korea in 2007 and to date has seen over 15,000 participants picking up fuel-efficient driving skills, information and technical know-how. The country competition, opened to all truck drivers in Malaysia, kicked-off April 19 in Kuching before proceeding to Bintulu and Kota Kinabalu in East Malaysia.

In Peninsular Malaysia, the Challenge was held at Volvo Trucks Malaysia Sdn Bhd’s flagship dealership in Port Klang for the first time before moving to Ipoh, Prai, Kuantan and Johor Bahru.