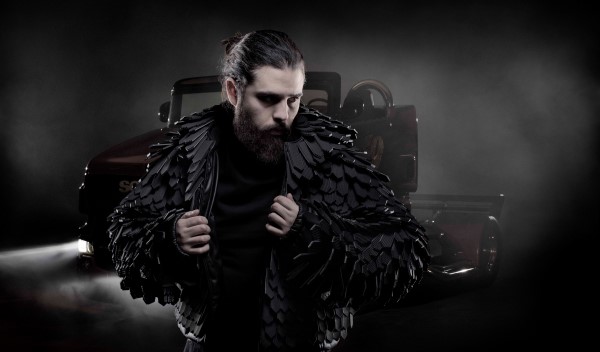 The duo share an unfaltering passion for innovation and custom made design, resulting in the co-creation of a truly unique piece of couture fashion: The Griffin Jacket. Inspired by the Scania Griffin symbol and created from 200 metres of reinforced fan belts from Scania, it weighs around 12 kg. The Griffin Jacket has been meticulously cut into 800 feather-like shapes and stitched together.

Bea Szenfeld, whose designs have been worn by Björk and Lady Gaga is known for her experiential style that uses unconventional materials to create extraordinary pieces.

Svempa Bergendahl, who designs the world’s most famous show trucks says: “Having designed over 500 Scania vehicles, working with Bea on the Griffin Jacket was an excellent change of pace. We wanted to create something that celebrates the driver and brings the essence of Scania to life. Nothing embodies Scania more than the Griffin, which has grown to be an iconic symbol of Scania and the most recognisable feature of the brand.”

Inspired by The Griffin Jacket, Scania has also designed a limited edtion ready-to-wear line, featuring design elements seen in The Griffin Jacket; the dark colour palette, feather patterns and the Griffin symbol. With drivers in mind, the collection caters to the demanding challenges faced by truck drivers daily. The collection, consisting of both women and men’s wear, was created with a clear sustainability thinking. With material choices such as organic cotton, recycled polyester and recycled metal, the collection includes caps, key rings, t-shirts, hoodies and driver jackets.

The Griffin Jacket will be auctioned online on Barnebys, raising funds to support ActionAid, a leading international charity which works with women and girls around the world by providing support to those affected by climate and environmental changes. The auction will take place 7-22 November, 2017 and the winning bid and value will be announced shortly afterwards.