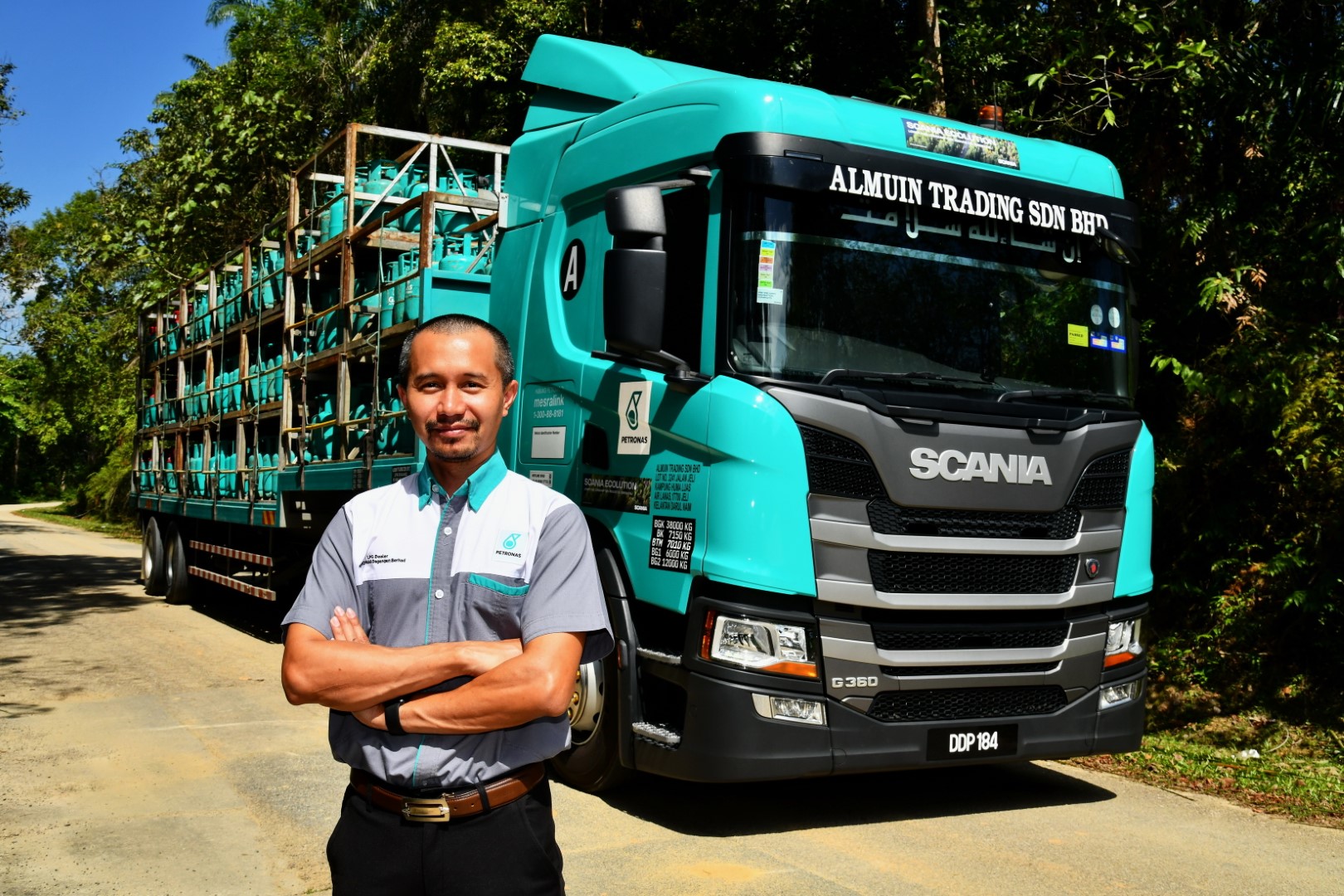 Almuin Trading Sdn Bhd (Almuin) became the first Scania New Truck Generation (NTG) LPG transporter in the East Coast of Malaysia to sign Ecolution in order to reduce its carbon footprint and impact to the environment.

“After getting delivery of the award-winning Scania New Truck Generation, I decided that we want to be a good company by signing Scania Ecolution, boosted by the Repair and Maintenance contract that I signed in the first quarter of 2021,” stated Amirol Ariff Azlam, Director of Almuin.

Scania Ecolution is a tailor-made partnership between Scania and its customers that focuses on reducing its customers’ carbon footprint by lowering fuel consumption resulting in the reduction of emissions of Carbon Dioxide (CO2) into the atmosphere.

“Our core business is the distributorship of Liquified Petroleum Gas in Kelantan. We get our LPG supply from Kerteh, Terengganu, 600 kilometres return daily and with the NTG, we are seeing good savings in its fuel consumption.”

“On average, the NTG will do 18,000km to 20,000km per month, and with the NTG’s design features such as the advanced powertrain and aerodynamic solutions, we can see daily savings of 3 percent sometimes more.” said Amirol

Almuin invested in the NTG based on strong recommendations from friends in the business. The decision to go for the Scania brand was based on the successes, in terms of reducing operating expenditure by those Scania truck operators.

Amirol was confident enough to go by the tried and tested results of others without going through them himself.

“And most importantly, Scania has a Sales and Services centre in Kota Bharu, making it easy to maintain my Scania trucks and get maximum uptime for all my Scania prime movers.” stressed Amirol.

Some of the notable features that benefit Almuin include the NTG’s new design and frontal shape, and chassis for improved dynamics; maintenance based on operation to increase uptime resulting in increased profitability, ergonomic driver control panel and enhanced driver seat adjustment close to the door for comfort.

As for safety, the Electronic Braking System (EBS) and the Speed Limiter makes the NTG, one of the safest prime movers in the world. Furthermore, the large windscreen that gives extended view is added safety and comfort for the driver.

“We are presently working towards securing the driver training and coaching subscription so that the driver’s performance in terms of lowering their idling time, harsh braking and speeding while increasing coasting can result in the ultimate reduction of fuel consumption,” said Amirol.

One stop solution with Scania

“Almuin has been a loyal Scania customer that believes in the Scania way of working and is serious about approaching carbon reduction with total solution. Dealing with Scania is like being at a one stop shop, from signing up for Repair & Maintenance to securing Financial Services with Scania, truly is a testament to this,” said Phang Yee Fong, Regional Manager – East, Scania Southeast Asia.

“We hope to expand the business by getting more cargo customers while trying to extend the reach for the LPG distributorship to areas where Petronas LPG is not distributed. And we plan to do it in a very environmentally friendly and sustainable manner through Scania Ecolution,” concluded Amirol.