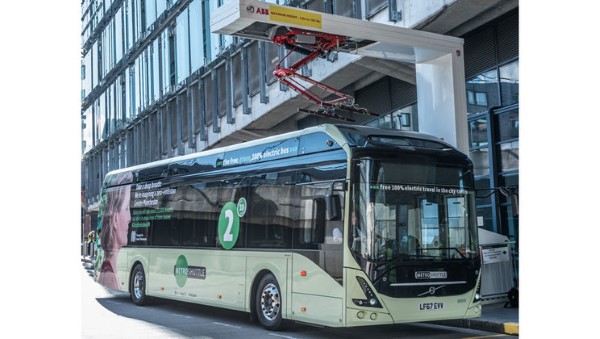 Volvo’s fully electric bus has embarked on a demonstration tour throughout the UK. Starting in Manchester at an event attended by new Mayor for Greater Manchester, Andy Burnham, the trial features ‘OppCharge’ opportunity charging via a pantograph for the first time in a major British city.

Operated by First Manchester for Transport for Greater Manchester (TfGM), the vehicle will be operating on the Metroshuttle 2 route – a free-to-use service that provides access to key locations across the city centre. It will be deployed for a period of eight weeks from the middle of September.

Following the Manchester trial, the vehicle will be heading for a demonstration at London’s Heathrow Airport for a period of eight weeks. This will involve transporting airport staff and customers to and from the car parks and terminals.

The zero emission, fully electric bus will be recharged on the route in Manchester, taking between three – six minutes via the innovative OppCharge pantograph from ABB. Installed at the Shudehill Interchange, this is the first time the system has been used in the UK, giving flexibility and the possibility of 24 hour continuous operation.

The first Volvo 7900 Electric vehicles are set to enter service in the UK in early 2018 in Harrogate. Volvo has received orders for its fully electric bus from markets including Luxembourg, Norway and Sweden. In total, Volvo has sold 3,600 electrified buses worldwide.

Back Mazda CX-8 Will Start Selling in Japan Before End of 2017
Next Jeep says goodbye to Malaysia….for now