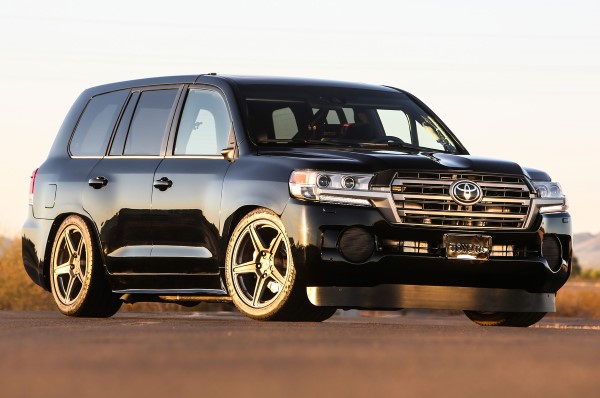 Land Cruiser, Toyota’s iconic go-anywhere four-wheel-drive sport-utility vehicle, has earned myriad accolades and records over the 60-plus years it’s been in production. And now, among them: the title of “World’s Fastest SUV” thanks to a record speed of over 230 mph, attained by the custom 2,000-horsepower Land Speed Cruiser.

With former Toyota NASCAR driver Carl Edwards at the helm, the understated Land Speed Cruiser shattered the previous “World’s Fastest SUV” record by more than 19 mph, reaching a GPS-verified and video-documented 230.02 mph before running out of usable pavement. With enough track ahead, the Land Speed Cruiser could be expected to go even faster.

“At Toyota, we like to say ‘Let’s Go Places,’ and the Land Speed Cruiser goes places faster than any SUV before it. This was an aspirational goal that inspired us all,” said Steve Appelbaum, Toyota Motor Sales national engagement marketing manager. “We achieved success by employing the kind of innovative solutions and unyielding determination that have long represented the core of Toyota’s soul.”

The Land Speed Cruiser, which debuted at the 2016 Specialty Equipment Market Association (SEMA) Show, started life as a stock production model before being heavily modified by a team of engineers at Toyota’s Motorsports Technical Center (MTC). 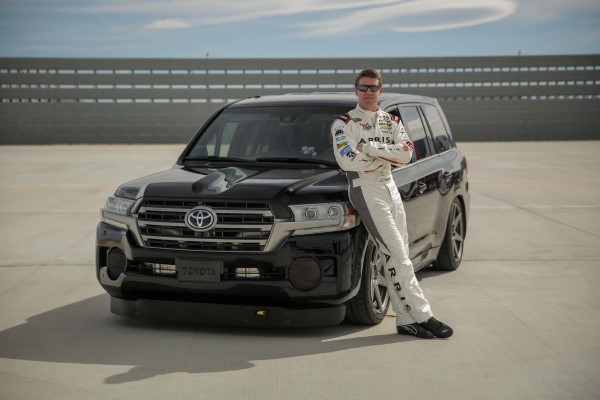 Using the Land Cruiser’s production 5.7-liter 3UR-FE V8 engine as a starting point, the team added a pair of volleyball-sized Garrett turbochargers that are capable of producing up to 55 PSI of boost. To cope with extreme force induction, the MTC team upgraded the engine’s internals with sturdier pistons and rods and a custom-made intake manifold, among other key items. This helped ensure the monstrous V8 could safely and reliably produce over 2,000 horsepower for its record-setting runs. The role of doling power was left to a custom racing transmission strong enough to withstand the stresses and abuses of high power and tremendous speeds.

However, building the engine was the easy part. Driving in excess of 200 mph challenges a vehicle’s aerodynamics and stability. To aid controllability, the Land Speed Cruiser sits lower to the pavement, thus dramatically reducing the amount of turbulent air allowed to pass underneath. Its frame received some massaging in order to maintain optimal suspension geometry, and was narrowed by 3 inches to accommodate wider Michelin Pilot Super Sport tires. 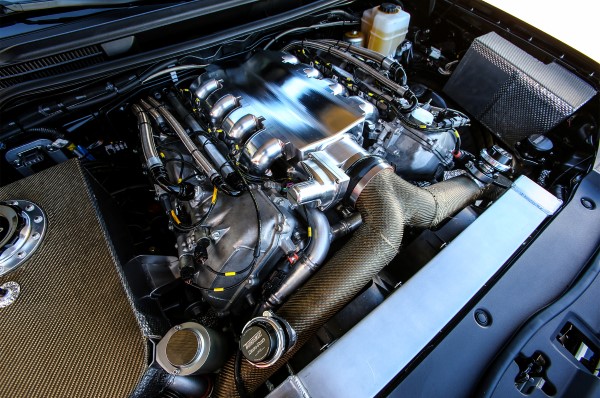 “I wanted the Land Speed Cruiser to provide the confidence you need, as a driver, to keep pushing even when the world around you becomes a high speed blur,” he said. “We made some setup adjustments, and it not only accelerates and shifts more smoothly, but it also has enhanced stability.”

With the Land Speed Cruiser dialed in and finally ready for its record-setting run, recently retired Toyota NASCAR driver Carl Edwards met the team at Mojave Air and Space Port in Mojave, California. In addition to being one of the very few places in the U.S. where supersonic flight is allowed, it features a two-and-a-half-mile paved runway perfectly suited to the Land Speed Cruiser’s mission.

Prior to Edwards’ run, Stanton warmed up the SUV, moving it along at a hefty 198 mph. On his first run, Edwards was able to hit an awe-inspiring 211 mph, but found himself running out of pavement to slow the big SUV. More boost was then dialed in to up the power, and he tried again. 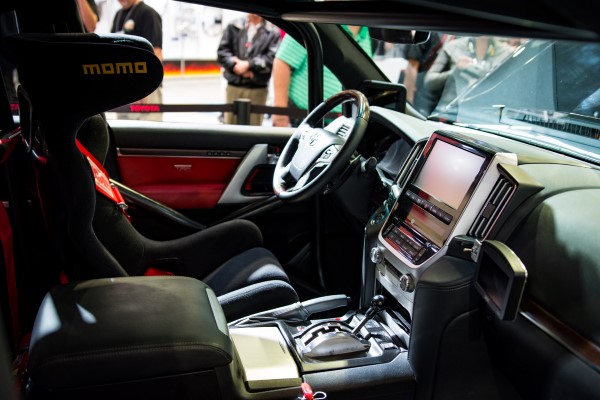 The next run proved to be the most impressive. Edwards put the hammer down, and piloted the Land Speed Cruiser to its jaw-dropping 230 mph record.

“At 225 mph, the thing was wandering a little bit. All I could think was that Craig said, ‘No matter what, just keep your foot in it,’ and we got 230 mph,” Edwards recounted from behind a huge grin after setting the record. “It’s safe to say that this is the fastest SUV on the planet.”