Scania Trucks from Södertälje to Rotterdam 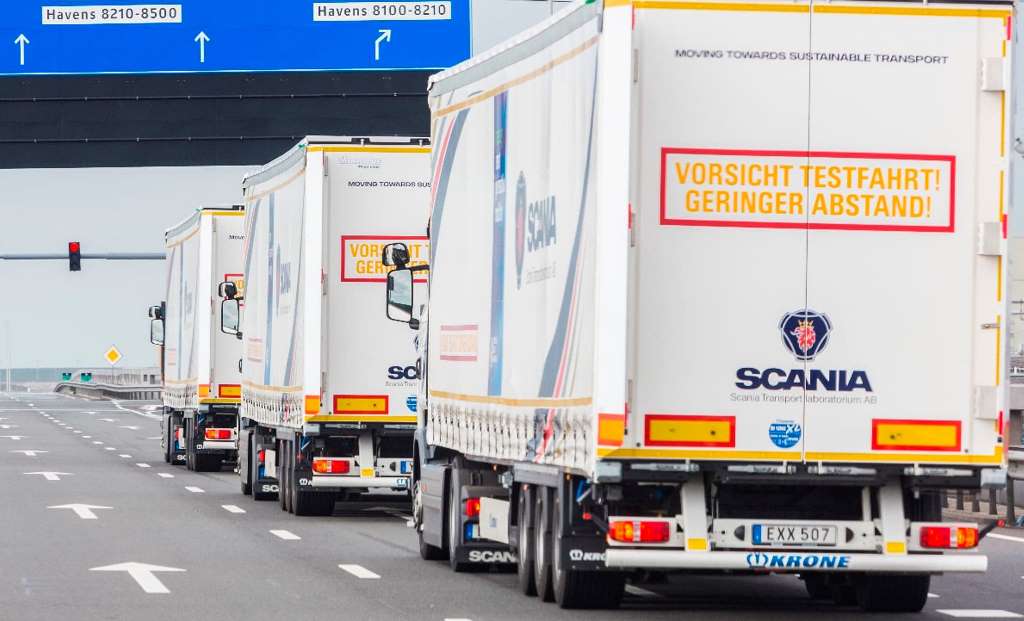 On 29 March, three extra-long trucks embarked on a trip from Scania in Södertälje, Sweden, driving in a close convoy to Rotterdam, the Netherlands. The initiative was being driven by the Netherlands, which currently holds the EU Presidency, and aims to fast-track the development of truck convoys. These convoys have the potential for increasing safety, as well as reducing fuel consumption and carbon dioxide emissions in all long-haulage road transport operations.

Scania is one of several stakeholders taking part in the European Truck Platooning Challenge, with involvement from 29 March to 6 April 2016. The Challenge was the world’s first cross-border initiative of its kind.

The project is also supported by ACEA, the European Automobile Manufacturers Association. The objective is to accelerate the development of convoy-driving corridors within Europe, to increase cross-border cooperation, and to pave the way for EU legislative changes.

Jonas Hofstedt, Head of Powertrain Development at Scania, says that “the European Truck Platooning Challenge is an excellent opportunity for us to increase awareness in both Sweden and Europe of the major advantages provided by vehicle convoys in achieving safer and more efficient transport operations and in improving traffic flows. We also hope to increase understanding of the fact that common standards are required for the different support systems, and that joint European legislation is required in order to enable large-scale convoy driving.”

Scania has taken the lead with new concepts for convoy driving, developing truck combinations that can drive with only a short distance between them, in what is known as platooning. The first vehicle in the convoy acts as the ‘leader’ which the others follow and adapt to. Over the years, Scania has used platooning in its own transport operations, demonstrating that by reducing drag it is possible to achieve fuel savings of up to 10 percent in real traffic conditions.

Many trucks are presently equipped with radar and camera-based systems that enable vehicles to maintain shorts distances to vehicles ahead. With enhanced communications vehicles in a convoy can maintain a close but safe distance from each other, which can be as little as 10 metres. This is achieved through the use of advanced technology in which the vehicles are digitally connected to each other with advanced software regulating the distance between the vehicles and simultaneously applying the brakes when necessary.

The drivers in the convoys are always responsible for their vehicles’ support systems and can at any time leave the convoy or increase the distance to the vehicle in front if necessary, for example to help other drivers exit on the motorway.

For the leg between Södertälje and Malmö in Sweden, the Scania truck and trailer combinations will be driven with an extra trailer, taking their total individual lengths to 32 metres.

“Longer vehicle combinations are something that we’re already testing on some stretches of road and with which we are achieving good results,” says Hofstedt. “Adding an extra trailer increases the amount of goods in every transport movement, reducing per tonne-kilometre costs by 40 percent and carbon dioxide emissions by more than one-quarter.”

Scania is also continuing to invest substantial research resources in accelerating the introduction of connected heavy-vehicles and related infrastructure. At the recent Mobile World Congress in Barcelona, Scania and Ericsson announced a new joint research initiative in this area.