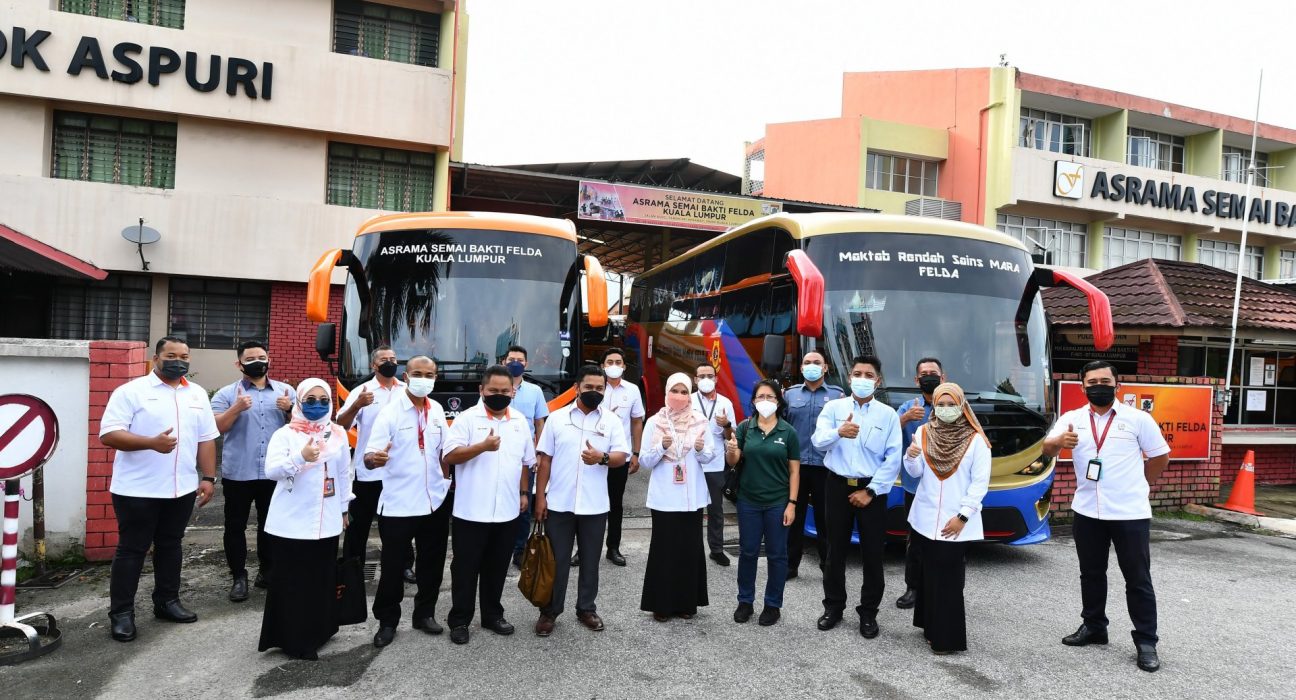 These Scania coaches are packaged with five years Inclusive Maintenance, three years extended warranty and Fleet Management System (FMS) Control 10. This Corporate Social Responsibility (CSR) handover is to facilitate the daily shuttling of the growing number of students for both educational facilities.

FELDA signed the Inclusive Maintenance contract for five years to take advantage of Scania’s proactive maintenance procedures and avoid time- consuming and costly problems from occurring. Uptime is maximised while FELDA’s operating costs are reduced. This contract also gives predictable costs, so FELDA can focus on getting the students to and from their hostel, worry-free.

By individually optimising the different modules in its service plan, Scania ensures via the Inclusive Maintenance contract that downtime is planned and reduced to a minimum.

These two coaches also come with Scania’s Advanced Driver Assistance System (ADAS) as part of the Safe and Smart Transport Technology platform that offers safety features such as the Anti-Lock Braking (ABS), the Electronic Braking System (EBS). Other features include the retarder and traction control, hill hold, and three fire alarm sensors.

Both the Scania coaches are pre-set default with the Economy mode. This is to ensure that FELDA enjoys the best fuel economy and CO2 emission reductions, in line with Science Based Targets initiatives (SBTi).

Scania customers with coaches purchased before 2021 can set the Economy Mode as default on their vehicles at any authorised Scania workshop nationwide.

Furthermore, upgrading the complimentary Scania FMS Monitoring feature to the Control 10 package will also ensure further reduction in carbon footprint through even more fuel savings via the improvement of the drivers’ skills in handling these two Scania coaches.

These Scania coaches are FAME-prepared and ready to run on B20 up to B100 bio diesel. It is environmental-friendly, lowering global emissions by reducing CO2 to limit the effects of climate change. FAME is the abbreviation for Fatty Acid Methyl Esters that is the technical term for the biodiesel produced in Malaysia.

FELDA’s CSR programme began primarily for the benefit of the FELDA’s agricultural settlers and the FELDA employees. The establishment of FELDA in 1956 made way for those who were skilled and interested in contributing towards the development of rubber and palm oil planting. Subject to certain criteria, participants were trained, and given the opportunity to succeed and prosper.

As FELDA developed into a successful profit-making corporation, a CSR programme was established with the main focus of providing benefits for the offspring of FELDA settlers and employees. One of the many benefits were to provide coaches for the easy shuttling of FELDA’s children to and from FELDA’s Asrama or Hostels to top schools in urban areas.

Establishing the Asrama Semai Bakti FELDA Kuala Lumpur (ASBFKL) in 1975 was a major social responsibility move that benefits the FELDA families. This has since, gave way to the setting up of two more hostels; one in Kuantan (1978) and another in Johor Bahru (1983). Similar benefits were extended to other institutions such as the Maktab Rendah Sains MARA (MRSM) that also have FELDA’s children in them.

Providing transportation with Scania coaches, backed with Scania Inclusive Maintenance, extended warranty and Scania FMS reflects FELDA’s social responsibility in caring for FELDA’s people and the communities they are in.