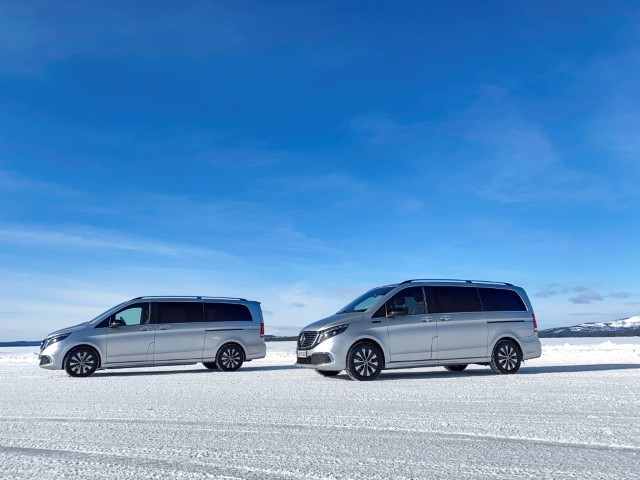 Customers, whether private or commercial users, place the same demands on electric vehicles as they do on equivalent vehicles with combustion engines: complete reliability and functionality – even in severe conditions.

For several weeks, the development team subjected the first purely battery-electric premium MPV from Mercedes-Benz to an endurance test in Arjeplog, Sweden under severe climatic conditions.

At temperatures reaching minus 30 degrees with icy roads and deep snow, the EQV proved its operability under extreme conditions. Thus, the vehicle completed one of its last milestones on the way to its market launch in the second half of 2020.

The vehicles were put through numerous complex tests on the test site close to the Arctic Circle. Over 30 engineers, electronics experts and mechanics from Mercedes-Benz Vans were involved: for example, they drove over frozen lakes and measured the effects of extreme cold on handling, ergonomics and comfort, using specialised measuring technology.

The starting behaviour and low-temperature resistance of the drive components, software and interfaces, and the thermomanagement of the entire vehicle, were tested in cold cell facilities.

A further important element of the test: charging behaviour. The EQV is equipped with an integrated fast-charging function with which it can recharge from 10 to around 80 percent of its energy in 45 minutes. This is a great advantage, particularly when travelling, but it must function reliably regardless of the temperature.

Reliable handling in ice and snow is also essential. On the test drives, the EQV showed that the low, central positioning of the lithium-ion battery in the underbody has a positive effect on the vehicle’s handling, specifically under winter conditions. The conclusion of the testers was that the EQV is fit for customer operations – even in arctic conditions.

“In this final winter test, we demanded everything of the EQV – and it performed very well. We used these extensive tests for the last milestones on the way to market readiness”, said Benjamin Kaehler, Head of eDrive@VANs at Mercedes-Benz Vans. “Particularly with regard to thermal management, so important to electric vans, we were able to gain insights which will make the EQV safer and more comfortable.”

The market launch of the EQV will be in the second half of 2020.