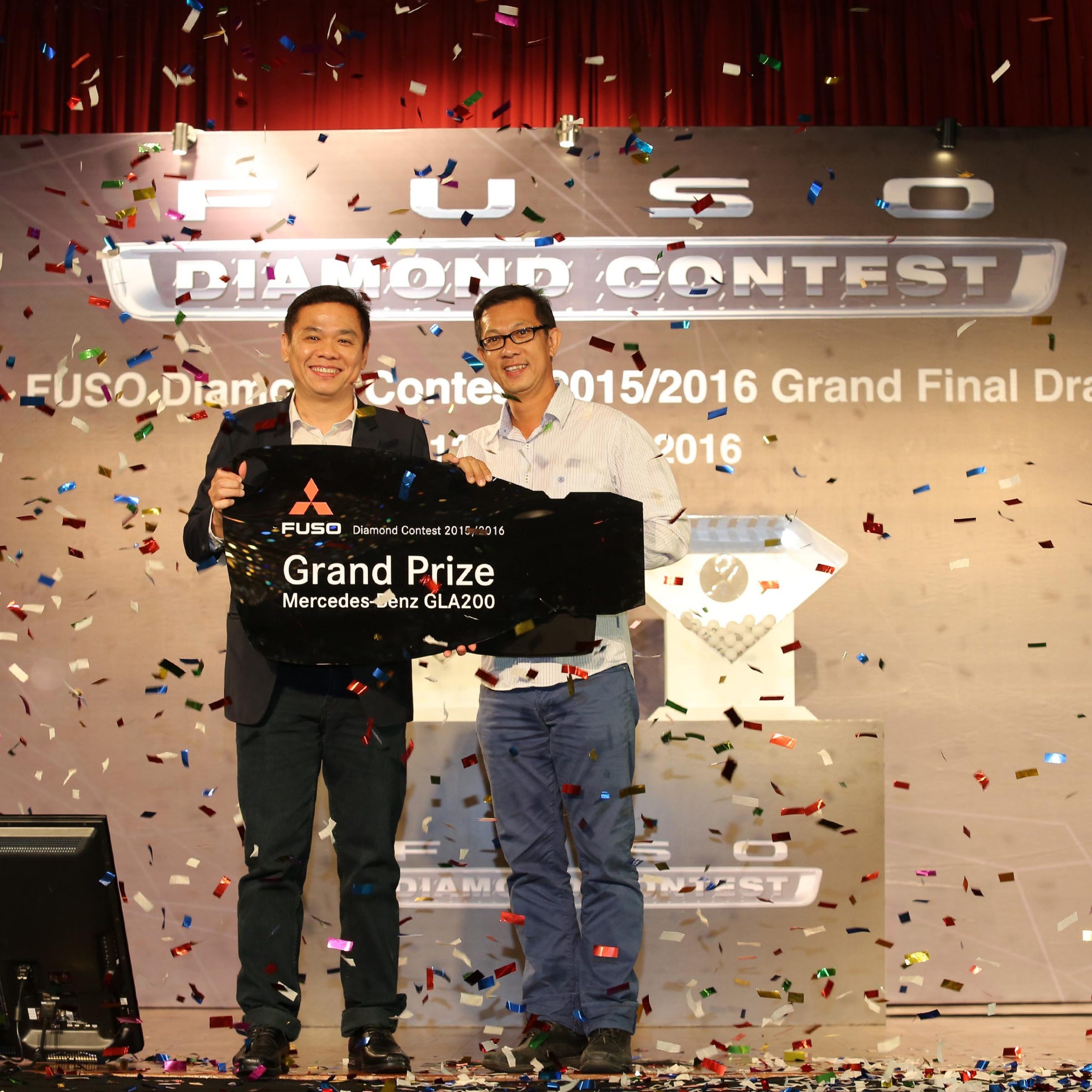 Mercedes-Benz Malaysia Sdn Bhd, authorised distributor of FUSO trucks in Malaysia, has announced the 2015 winner of its popular Diamond FUSO Contest. Last year, over 2,500 entries contested for a chance to win the grand prize worth RM236,888.

In the grand final draw, Metfab Engineering Sdn Bhd was named the grand prize winner, taking home the coveted Mercedes-Benz GLA 200. A FUSO customer since 2014, Mr Vincent Teh said, “I am absolutely delighted that I have won the biggest prize of the night, and I am excited to drive the Mercedes-Benz GLA 200. Thank you to MBM for the 2015 Diamond FUSO Contest. I have been a supporter of FUSO trucks and have found them a reliable vehicle for the long distance journeys that is required of my business. I look forward to investing in more FUSO trucks in the future.” 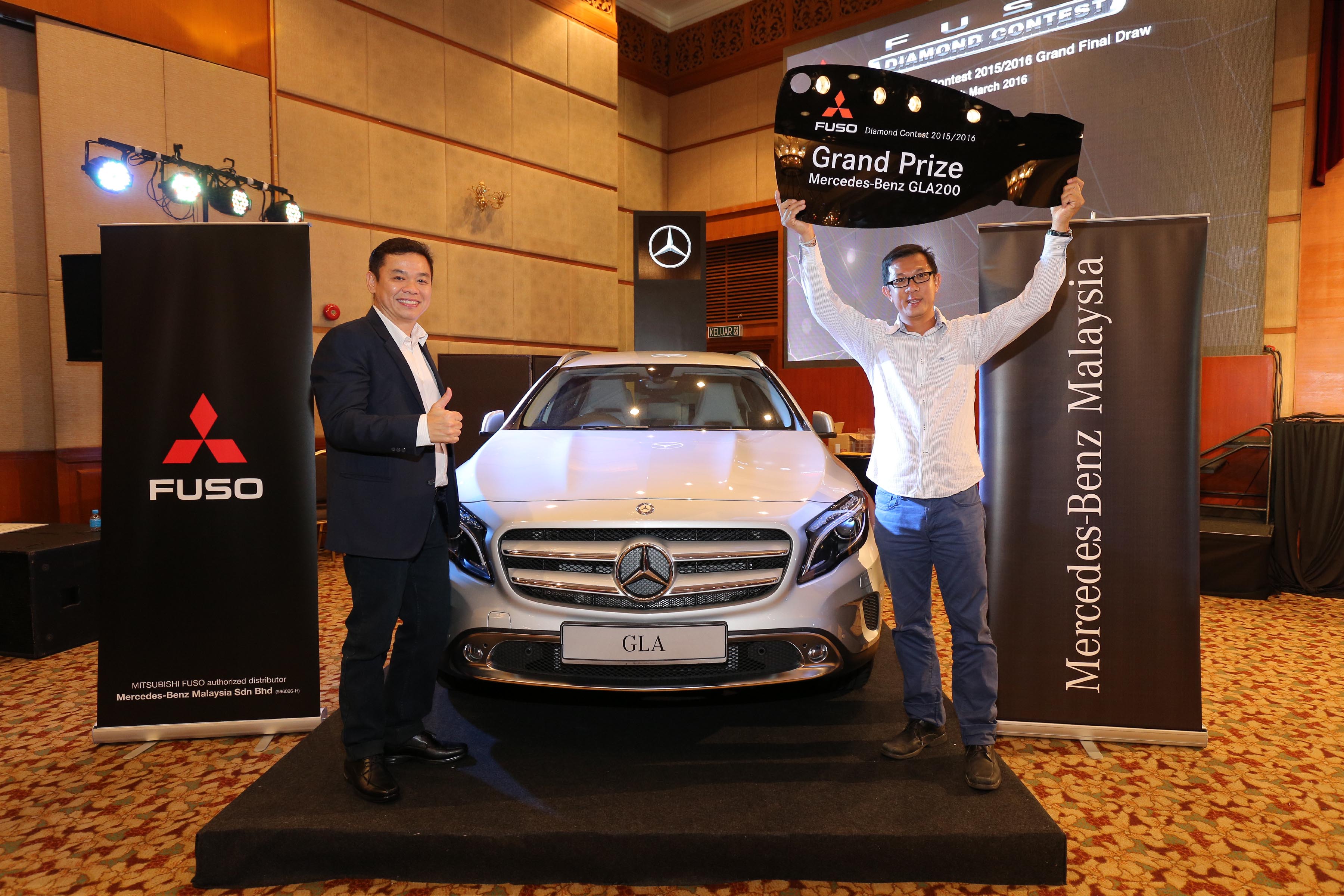 “The Diamond FUSO contest started in 2006 and was created to acknowledge our valued customer base. The contest also serves as a platform for us to engage with customers and demonstrate our appreciation for their loyalty to the FUSO brand.  Since then, the contest has become more and more popular.  When we started the contest in 2006, we received about 1,000 entries, and this year we had more than 2,500 entries.”

“Each year our dealers, staff and customers look forward to this contest.   As the number of entries increases so too does the realisation to each FUSO truck owner that a good vehicle can be ‘driving your business’ to greater heights.  Congratulations to all the winners of the Diamond FUSO contest, and we thank everyone for their participation,” said Mercedes-Benz Malaysia Commercial Vehicles Vice President, Mr Albert Yee.

The 2015 Diamond FUSO contest comprised two categories. The mini draw was open to all FUSO trucks registered between December 1, 2014 and May 31, 2015; while FUSO trucks registered between December 1, 2014 and December 31, 2015 were eligible for the grand final draw.  Throughout Diamond FUSO contest, a total of 74 lucky customers have won prizes valued at approximately RM480,000.  Held at The Royal Chulan Hotel in Kuala Lumpur, the grand finale award and dinner was attended by 650 guests, which included customers, dealers and employees of Mercedes-Benz Malaysia.

Following enthusiastic response from customers, Mercedes-Benz Malaysia will continue the FUSO Diamond Contest with the first mini draw set for July 2016.  Trucks registered between January 1, 2016 and December 1, 2016, will be eligible to enter this year’s contest and vie for RM480,000 worth of prizes.

Financial partner, Mercedes-Benz Services Malaysia, currently provides an interest rate starting from 3.08%, with a minimum down payment of 15% to acquire a FUSO vehicle. This offer is applicable for 2016 stocks of model: FE71PB, FE83PE and FE83PG with tenure of 3 to 7 years. The campaign period began in March 1, 2016.