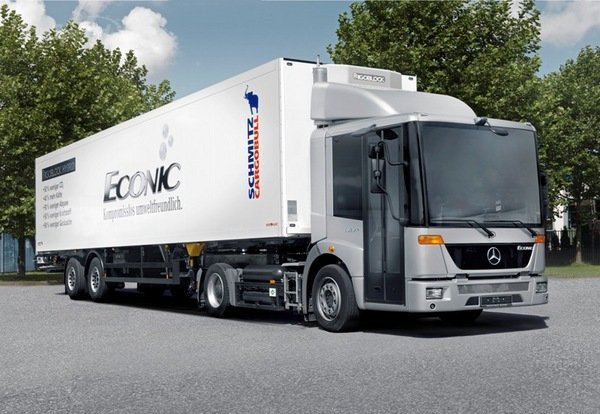 Effective this month, the Mercedes-Benz Econic will be equipped as standard with the assistance systems Active Brake Assist and Lane Keeping Assist, while adaptive cruise control will be available as an option. Active Brake Assist will initiate braking if necessary, thus potentially preventing rear-end collisions.
All this is available a full eight months before the legal deadline of November 2015. Lane Keeping Assist warns the driver if the vehicle appears to be drifting out of lane, while the adaptive cruise control system, already a familiar feature of passenger cars, controls the distance to the vehicle in front – for example in slow-moving traffic. The Econic has already previously been fitted with the Electronic Stability Program (ESP).
The next stage will involve the development of further safety systems which will be gradually introduced into series production over the period from 2015 to early 2017. The objective of this move is to prevent accidents involving pedestrians and cyclists, as well as accidents while moving off or manoeuvring during waste disposal operations.
Safety during municipal operations was a key factor even during the development of the Mercedes-Benz Econic. The low position of the cab, the large panoramic windscreen, the glazed co-driver’s door and a sophisticated mirror system are all safety features designed with the improvement of all-round visibility and the minimisation of blind spot areas in mind in particular.
The low floor concept, above all, means that the driver sits more or less at eye level with pedestrians and cyclists, thus helping to enhance the image of the Econic, especially as far as the residents of inner-city areas are concerned.
As well being a key factor in the protection of pedestrians and cyclists, safety also makes good business sense. The German Road Safety Council (Deutsche Verkehrssicherheitsrat) for instance, estimates the financial impact of traffic accidents in Germany alone to be around 25 billion euros each year. The driver, who may need to take time off as the result of an accident, must be replaced. A truck, coach or van standing in the workshop awaiting repair costs money, instead of earning money. The assistance systems do not therefore only contribute to improving safety, but also to increasing overall economic efficiency.
Post Views: 488
tweet

Back Shell AdBlue, When Will It Come To Malaysia?
Next Volvo FH / Kaiser Whale Recycling Tanker At Work