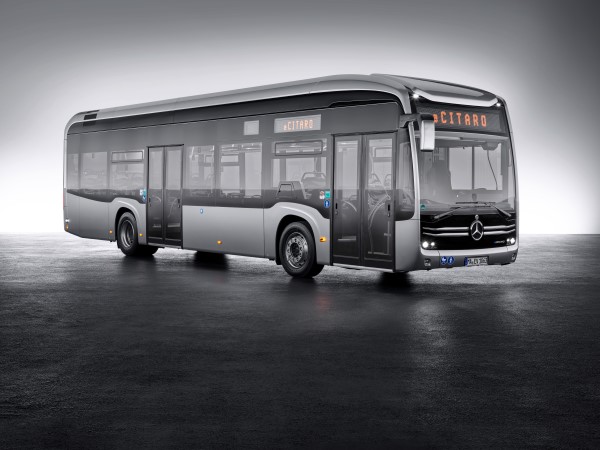 The new eCitaro offers an impressive and unprecedented standard in energy efficiency, courtesy of its innovative thermal management system that uses innovative components available for the first time with the launch of the eCitaro.

Its performance enables the eCitaro to cover a large part of the requirements of the transport operators right from the start. In addition, it is ready for the battery technology of the near future – the performance capabilities will increase quickly. At the same time, due to the high development effort and extensive testing, it comes to the starting line already fully matured.

In addition, the intelligent modular concept of battery and charging technology is compelling. Its design fuses the basic shape of the Citaro with elements of the Mercedes‑Benz Future Bus into a distinct appearance. It is also more than just a city bus: Mercedes-Benz takes a holistic view of electric mobility, embedding the eCitaro firmly in its overall eMobility system. In addition, the eCitaro is the starting signal on the road to an electric future.

The platform of the new Mercedes‑Benz eCitaro is the Citaro, the world’s best-selling city bus with more than 50,000 units sold. With its wide range of low-emission and now also locally emission-free city buses, it has the right answers to questions about environmentally friendly local public transport.

The Citaro and the large-capacity CapaCity bus, as well as the Citaro hybrid and the Citaro NGT, provide practical evidence of the highly sophisticated level of development of powertrains with combustion engines every day. They are characterised by both their efficiency of operation and their low emissions. The all-electric eCitaro is now taking the next step from low-emission bus to locally emission-free bus.

The roof-mounted equipment of the eCitaro is hidden behind an elegant roof-edge ridge. It is made of a multi-piece extruded aluminium profile. The glossy black lower segment extends the generous glazing of the city bus. The upper segment is painted in the vehicle colour, transitions smoothly into the A0‑pillar at the front and into the corner post at the rear, and visually frames the side. These optical tricks lend the eCitaro perfect proportions and make it seem light.

The rear corner posts end at the top in a pronounced curvature in the roof-edge ridge. Their elegant shape as well as the likewise stylised island as covering for the roof-mounted equipment and the black bars that connect rear window and roof take the heft off the high superstructure. The designers paid attention to details. For example, the shapes of the island correlate with those of the rear hatch. The eCitaro adopts the tail lamps as well as the rear hatch and bumper from the existing model range.

In the passenger compartment, the eCitaro rings in a general update of the interior of the entire Citaro family of models. A stand-out feature in the interior is the coffered design ceiling above the centre aisle and the sweeping roof-edge flaps. They hide a new air circulation system with textile ducts in place of the current plastic air ducts. They are even easier and simpler to install.

Particularly noteworthy are the technology modules as connectors between the individual elements of the coffered ceiling. They combine the interior lights and the loudspeakers in one element. With this step, the interior lights are switched to LED as standard. The lighting is ingenious: The light of the LED lamps is refracted in a way to make the technology modules appear to the observer as one homogeneous light panel. 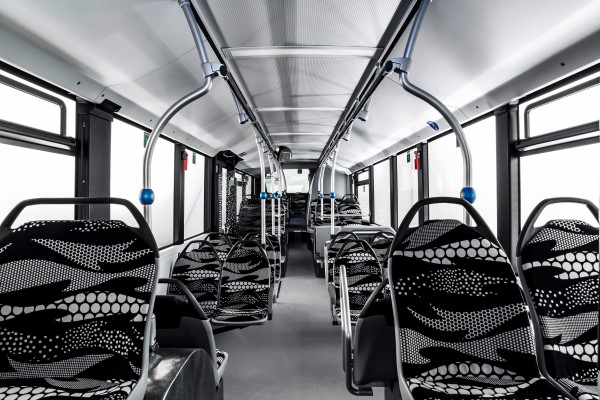 In addition to the closed look and the new interior lights, the advantage of the new ceiling is a significantly reduced number of individual parts. Together with the new air circulation system, this lowers the already low interior noise in the passenger compartment even further, which means more comfort.

Also new is the black trim on the sills and window posts. As a result, the window posts stand out less and the appearance of the side walls is calmed. 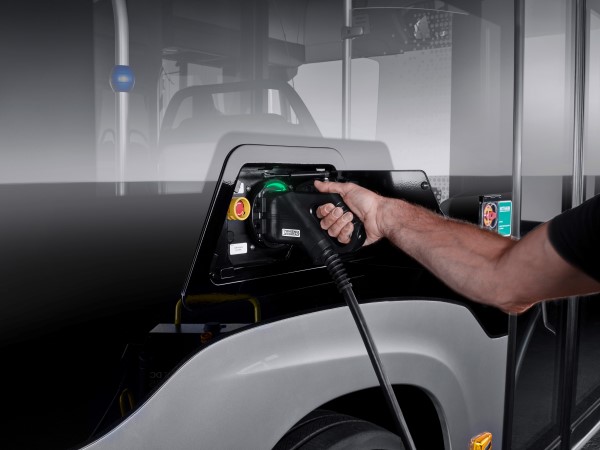 While the new exterior was designed and developed exclusively for the eCitaro, Mercedes‑Benz will transfer the changes in the interior to the entire model series.

The powertrain of the new eCitaro is based on the proven and optimised electric portal axle ZF AVE 130 with electric motors at the wheel hubs. The peak output of the motors is 2 x 125 kW, while torque is 2 x 485 Nm. It is an inherent feature of such motors that this is fully available right from the start, ensuring appropriate dynamic performance even with a full complement of passengers.

Lithium-ion batteries with a total capacity of up to about 243 kWh provide the power. They are modular in design: the batteries are split between up to ten modules, each supplying around 25 kWh.

As well as two battery modules on the vehicle roof, the standard equipment includes four modules in the rear of the bus. In the eCitaro, these are taking the place of today’s powertrain combination of combustion engine and transmission. Depending upon customer requirements, another two or four battery modules are mounted on the roof of the eCitaro.

Each battery module is made up of 15 cell modules as well as a control unit for monitoring purposes and as a means of balancing the charge of the battery cells. Each separate cell module houses twelve battery cells. Mercedes-Benz uses easily manageable prismatic cells with a capacity of 37 Ah each.

With a minimum of six and up to a maximum of ten possible battery modules, transport operators can adapt their usage and charging strategy very precisely to individual needs. Opting for the largest number maximises the range of the buses, while a smaller number reduces the weight as well as the cost of purchase and allows more space for passengers – but potentially makes time-consuming opportunity charging necessary.

With the maximum complement of ten battery modules, the eCitaro in standard specification weighs around 13.44 tonnes. In conjunction with a gross vehicle weight rating of 19.5 tonnes, this corresponds to a payload of more than six tonnes or around 88 passengers – in line with what is needed in practice even during rush hour.