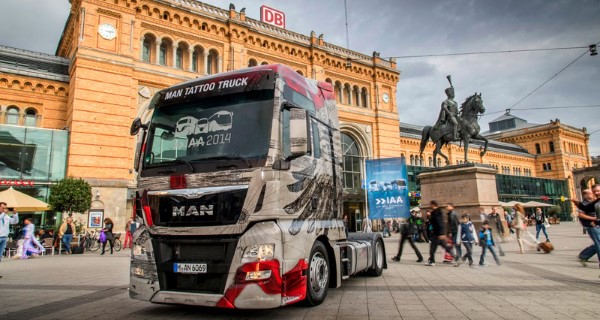 MAN has started the IAA Commercial Vehicles Motor Show 2014 with a world premiere: six “MAN Tattoo Trucks” that were unveiled in front of Hanover Central Station.

The spectacularly designed semitrailer tractors are the outcome of an international design competition entitled ”Can you make traveling works of art from songs? MAN kann.”

The idea behind it was to find the person who interpreted song texts from Peter Maffay’s new album “Wenn das so ist” [If that is so] in the most fascinating way on a truck in terms of form and color.

”Each of the six trucks is unique. We are very honored that our songs served as inspiration for these rolling works of art. We would also like to praise the pros from smartart who painted the trucks,” enthused Peter Maffay. The MAN Tattoo Trucks will transport the stage equipment across Germany on his tour, which kicks off in early 2015. 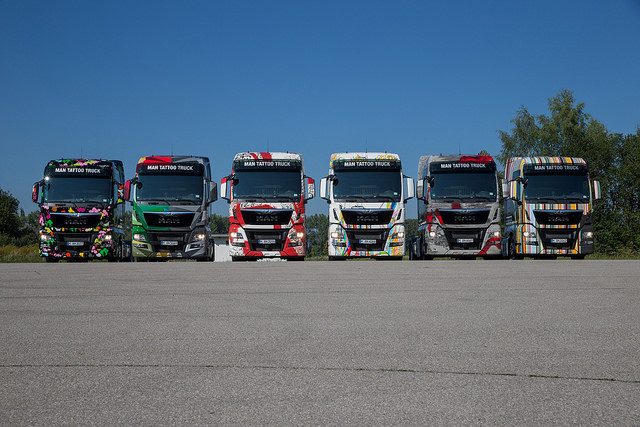 The first prize of €10,000 went to Sebastian Bieler for his design. The panel judged the three best designs on color composition, artistic interpretation of the songs, visual effect, creativity, and workmanship.

Sebastian Bieler was born in Dresden and studied painting and graphic arts at Dresden Academy of Fine Arts. The strong influence of graffiti art can be seen in almost all of his designs: “I have painted cars with graffiti before, but this is the first time I have painted a truck. The song “Schwarze Linien” [black lines] matches my ‘free’ style like no other. Black lines actually make up a key part of my artistic work, but I’m fairly confident that Peter Maffay would interpret his song differently.”