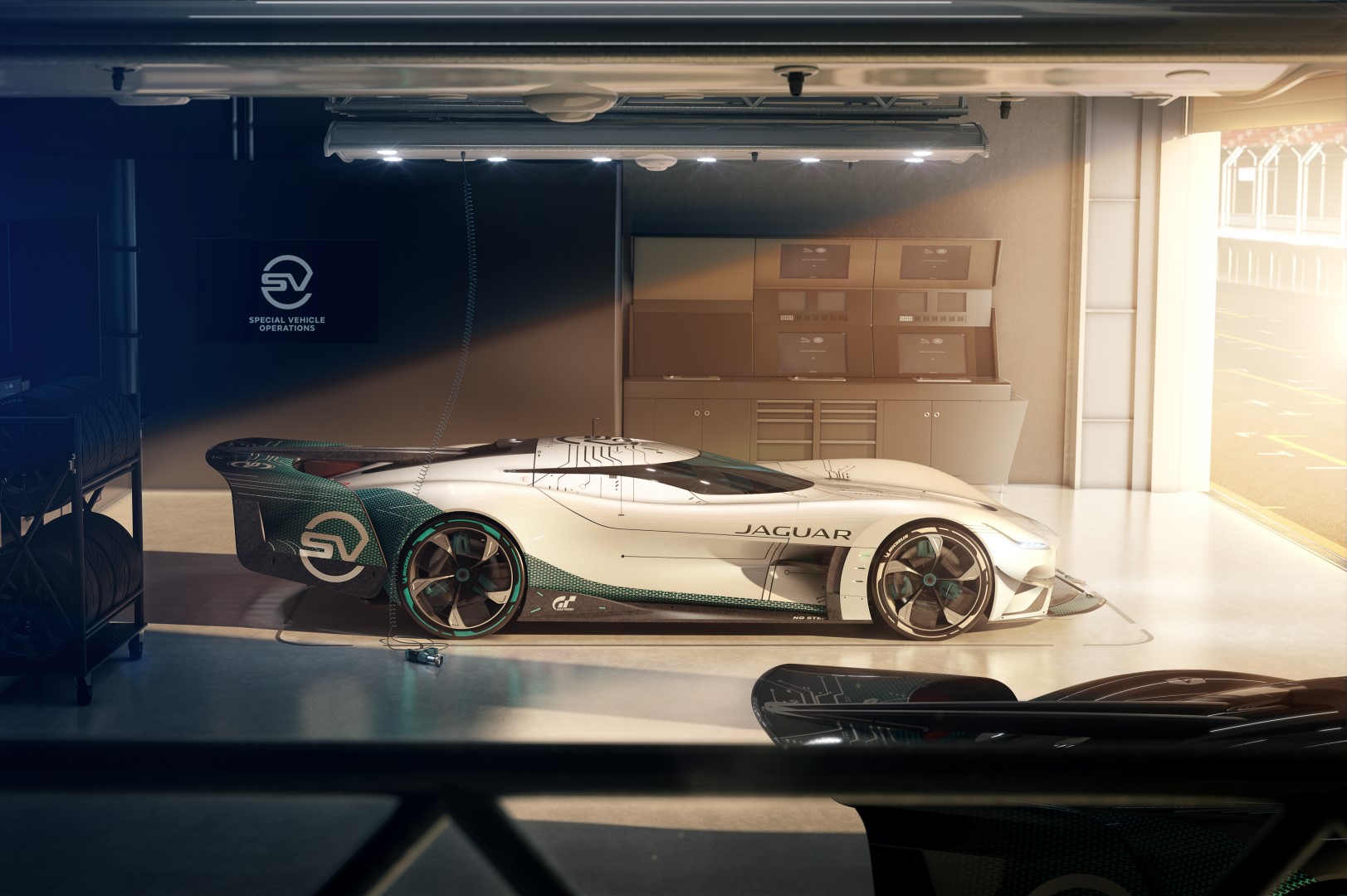 In an effort to conduct a real-world design study, Jaguar has built a full-scale model of the Vision Gran Turismo SV, which is arguably the most radical interpretation of an all-electric Jaguar race car yet.

Powered by four electric motors developed by Jaguar Racing, the Vision Gran Turismo SV makes a massive 1,903 PS and 3,360 Nm of torque, and sprints from naught to 100 km/h in a mindblowing 1.65 seconds while clocking a top speed of 410 km/h. Each motor has its own single-speed transmission.

Power comes from a state-of-the-art lithium-ion battery pack which is housed low down in the GT SV’s light, stiff body structure, delivering a low centre of gravity, a low roll centre and near-perfect weight distribution.

According to Jaguar, the Vision Gran Turismo SV was fully engineered in the virtual world, and its aerodynamics was optimised, tested, and proven using state-of-the-art simulation tools.

As far as the design goes, the Jaguar Vision Gran Turismo SV takes inspiration from iconic racing Jaguars of the past like the C-type, D-type, XJR-9, and of course, the Jaguar XJR-14.

The Vision GT Coupé’s silhouette is still clearly recognisable in the GT SV, including the curvature of the C-type and D-type-inspired fenders, and – even with the additional motor driving the front axle – the wheelbase remains unchanged at 2,721mm.

Measuring 5,540mm from nose to tail, the GT SV is 861mm longer overall – a change driven entirely by aerodynamics. To deliver the increased downforce needed for greater traction for faster cornering and increased high speed stability on long straights, the GT SV has a new front splitter and a new deployable rear wing.

In addition to the larger, more effective splitter – which produces downforce over the front axle – apertures in the front valance channel air across the face of the front wheels to reduce turbulence and help air to flow cleanly towards the rear of the car. Air passing through the wheel wells is also smoothed towards the rear via exit vents in the fenders.

The completely enclosed, sculpted underbody – which includes a keel element behind the front axle to aid high-speed stability – accelerates airflow, reducing its pressure and therefore helping to reduce lift, before it exits at the rear via a large venturi.

That being said, the Jaguar Vision Gran Turismo SV will be coming to the Gran Turismo game in 2021. So, if you don’t have a PlayStation, it’s about time you got your hands on one just to give this machine a try.