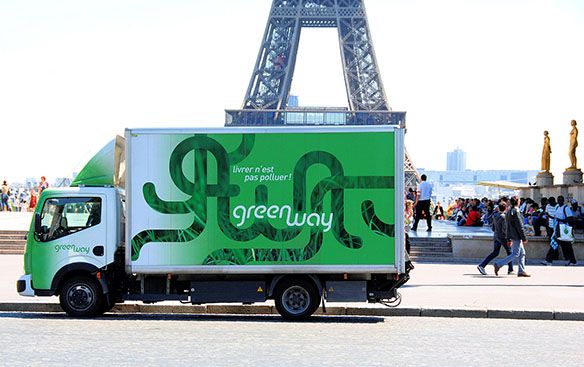 Greenway Services, a carrier service provider specialising in deliveries by all-electric vehicles, has been serving its entire client base by Renault Trucks Maxity Electric vehicles since 2011.

The company recently announced that its vehicles have already covered over 220,000 km to date in Paris and its suburbs.

Exclusive to Renault Trucks, the Maxity Electric has everything it takes to meet the needs of Greenway Services. This vehicle, which can be driven by a person with an ordinary driving licence, can carry a payload of around 1.5 t. It is powered by the latest generation lithium-ion batteries, which can be recharged in seven hours at a cost of around €2 a day. The batteries are now scaled to enable the vehicle to cover around 100 km a day on a full charge.

“The Maxity Electric’s high payload and operating range enable us to draw up logistics plans adapted to our clients’ needs, optimise our rounds and thereby amortise the extra cost involved in an all-electric solution,” explains Nicolas Morisse, Managing Director of Greenway Services.

“Some of our long-standing clients, such as L’Occitane in Provence and Yves Rocher are already strongly committed to preserving the environment, and using a zero emission mode of transport enables them to pursue their commitments even further,” adds Nicolas Morisse. “But we are also convincing more and more businesses which are anticipating major changes in the way their goods are delivered in the future and are beginning to switch some of their deliveries in Paris to all electric.”