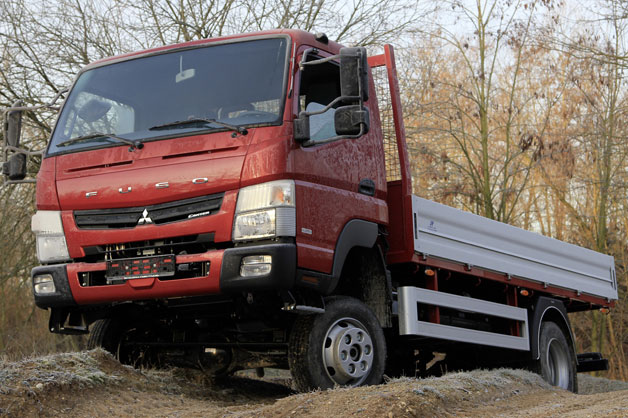 The Mitsubishi Fuso Canter 6C18 has been voted “Heavy Duty 4×4 of the Year” as part of this year’s awards from Trade Van Driver Magazine.

Commenting on the award, Matthew Eisenegger, editor of Trade Van Driver Magazine, said: “The Fuso Canter 4×4 really has something to offer when it comes to extreme versatility. Superb off-road capability, excellent ground clearance and a balanced chassis are just a few of the features which impressed the readers who cast their vote. Certain trades which involve working outdoors need a special vehicle, and the Fuso Canter 4×4 is a fantastic off-road solution”.

Trade Van Driver Magazine presents awards to manufacturers, companies and individuals who in the opinion of its readers provide the best solutions for van customers in the retail sector. The award was presented to Vincente Connolly, who as Director of National Sales at Mercedes-Benz & Fuso Trucks is responsible for sales in the UK.

According to Vincente Connolly: “The Fuso Canter 6C18 4×4 is a high-performance vehicle for both on- and off-road use. We are delighted with this award from the magazine readers”.

This award for the Fuso Canter, which is built at the Tramagal plant in Portugal and sold and supported exclusively through the Mercedes-Benz commercial vehicle dealer network in the UK, confirms that customers are investing in a vehicle which is tailored to the needs of their sector.

The Fuso Canter was already voted “Heavy Duty 4×4 of the Year” by Trade Van Driver Magazine in 2014.