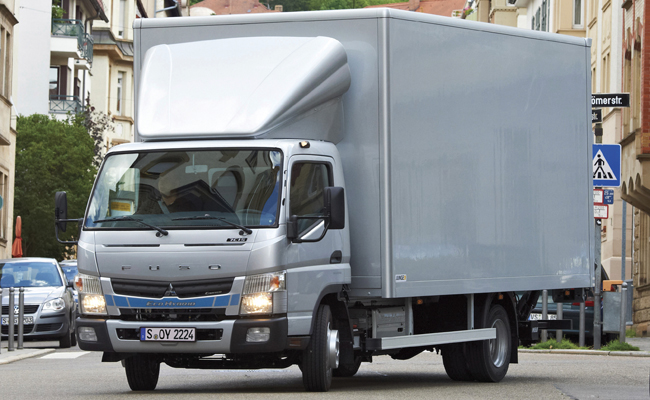 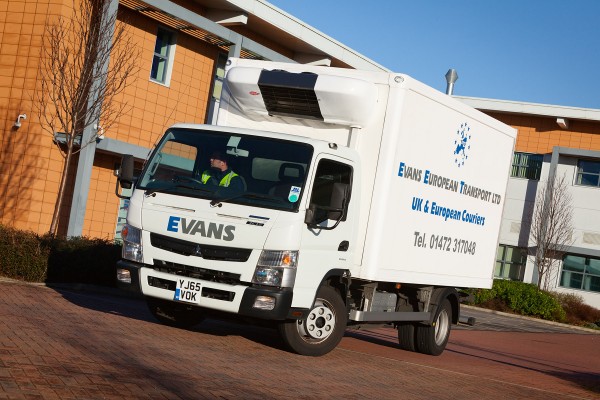 In the British haulage sector a further transport company is placing its trust in the efficient and environmentally friendly hybrid technology from Fuso. The company “Evans European Transport”, which specialises in refrigerated transport and is based in Grimsby at the mouth of the Humber where it flows into the North Sea, recently placed its trust in the performance of the Fuso Canter Eco Hybrid for food transport.

After several weeks of use an initial conclusion can be drawn in comparison with the other 7.49-tonners in the fleet which are also used for transporting refrigerated foodstuffs, but have a conventional diesel engine as their drive system. Managing director Colin Evans comments: “The Fuso Canter Eco Hybrid is considerably more efficient when out on the road than its diesel colleagues – not only with regard to fuel consumption, but also where the payload is concerned.”

In spite of the additional weight of the electric motor and lithium-ion battery plus the box body and refrigeration unit, the payload of the Fuso Canter 7C15 Eco Hybrid is nearly 3.5 t. This corresponds to over one tonne more than its diesel competitors in the Evans fleet. Colin Evans is impressed: “These are astonishing values, which not only save our company costs, but also relieve the burden on the environment when it comes to the CO2 emissions.”

The Canter with hybrid drive saves up to 23 percent on fuel compared with the conventional Canter model and with a moderate price increase it pays off within a few years. The drivers can play their part in this too: on the instrument panel a hybrid display shows the driver the current load status of the battery. In addition, the energy display makes it possible to see when energy is being used or recuperated. This means that the driving style can be continuously improved.

With its start/stop device, purely electric moving off and the “Duonic” dual clutch transmission the Canter utilises the finest and simultaneously robust technology. With its drive system, which is as low on exhaust gases as it is on noise, it is a natural in short-radius distribution in urban areas.

The electric motor has an output of 40 kW, the maximum torque is 200 Nm. Energy for the electric motor is provided by lithium-ion batteries. Its capacity is 2 kWh, the weight a mere 63.5 kg. Fuso grants an explicit warranty of ten years on all the fundamental battery components. The increased weight of all the hybrid components amounts to merely around 150 kg. This means that the payload of the Canter Hybrid with a box body is nearly 3.5 t, and the load-bearing capacity of the 7.49-tonne model as a chassis with cab is up to 4.8 t. This makes the Canter best-in-class when compared with conventional 7.49-tonne models.

For Colin Evans the Fuso Canter Eco Hybrid is the first vehicle in his fleet with an alternative drive system. He trusts the well-proven Fuso powertrain engineering with over 20 years of hybrid experience. Back in 2010, at the end of a 350,000 km fleet test in London it was clear that the hybrid technology is an unproblematic and stable worker.