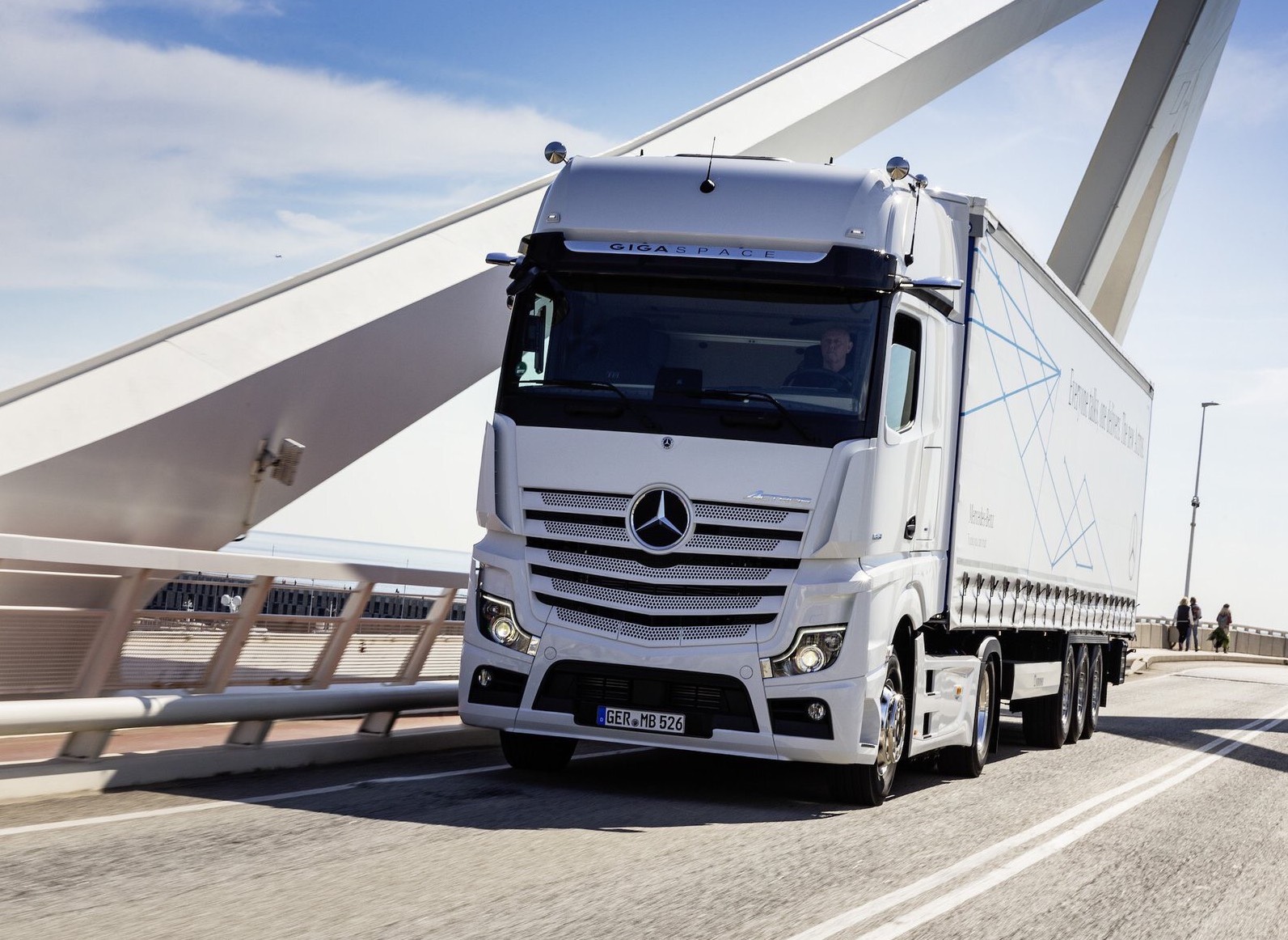 On the road in the new Actros

The new Actros sets the standard today in long-distance haulage. The flagship from Mercedes-Benz Trucks convinces in particular with its inner values: many of the innovations were developed with the declared goal of tangibly advancing drivers, customers and society. With new features like the Multimedia Cockpit, the MirrorCam replacing outside mirrors, more sophisticated safety systems and partially automated driving, the new Mercedes-Benz Actros thus provides the right answer to issues such as safety, fuel efficiency and availability. 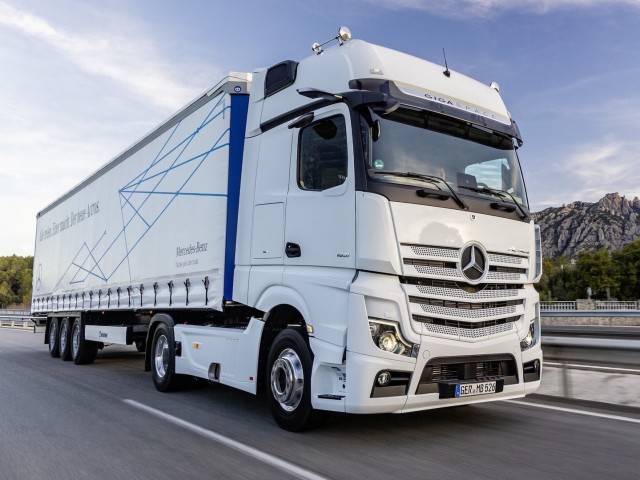 A milestone in truck development and manufacturing is the new Active Drive Assist. The system orients itself according to the markings on the road by means of a camera, and under certain conditions takes over the longitudinal and lateral guidance of the truck. Active Drive Assist can automatically steer, brake and accelerate the vehicle under certain circumstances. For the first time in a mass-produced truck, the system thus allows partially automated driving in all speed ranges – a first big step on the way to autonomous driving. However, Active Drive Assist is still an assistance system and does not relieve drivers of their permanent responsibility for what the vehicle does in traffic.

First mass-produced truck with MirrorCam instead of exterior mirrors

The new Actros has replaced the main mirror and wide-angle mirrors with the MirrorCam as a standard feature. The MirrorCam brings an enormous improvement in safety, vehicle handling and aerodynamics. The system comprises of two cameras directing to the rear of the truck and its images appear on two displays in the cab. The MirrorCam is mounted on the A-pillars and supports the driver with special distance lines for better estimating following traffic and in manoeuvring, cornering or changing lanes, for example. Another big advantage: the absence of conventional mirrors considerably improves all-around visibility. 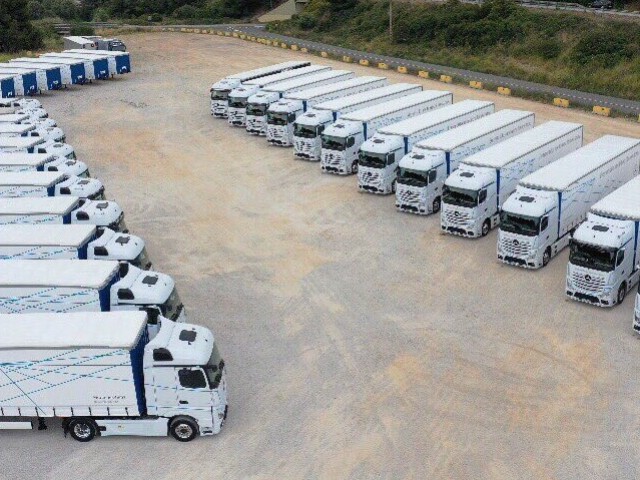 Better protection for pedestrians and cyclists: optimised Sideguard Assist utilises the displays of the MirrorCam

Sideguard Assist has been available since 2016 and is currently the only system of its kind fully integrated in the vehicle architecture. Sideguard Assist can minimise the probability of dangerous accidents on the co-driver side during cornering or when changing lanes to the right. The warning system has now been further improved: the MirrorCam and Sideguard Assist work hand in hand in the new Actros – all relevant information is consolidated at one place on the MirrorCam displays. 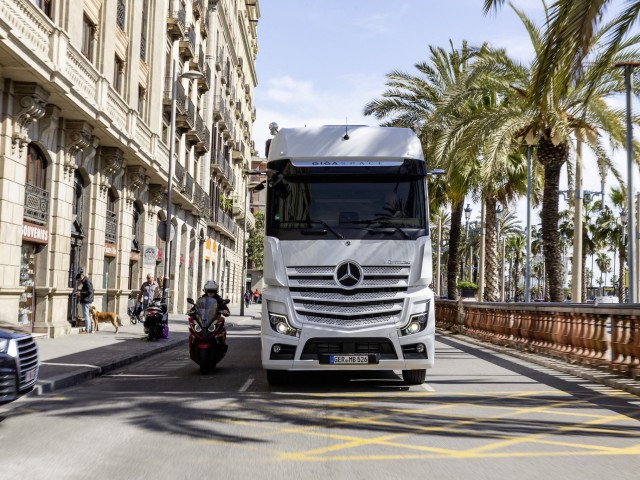 The more sophisticated system can now better react to people, thanks to the combination of radar and camera system. The proven abilities of the predecessor remain: regardless of whether a stationary or preceding vehicle or person is in question – Active Brake Assist 5 supports the driver in case a collision may threaten. If needed, with automatic maximum full-stop braking as well. Important to note: Active Brake Assist 5 is merely a driver assistance system; the driver continues to have full responsibility for driving the vehicle safely. This responsibility also means that the driver must always have full control of the vehicle in traffic, amongst other things.

The fuel consumption of the new Actros has been further reduced compared with its predecessor. Essentially contributing to this reduction is the expanded cruise control and transmission control system, Predictive Powertrain Control (PPC). New, among other things, is that PPC can now also be used in intercity service. Fuel economy in the new Actros is also supported by aerodynamic improvements with the MirrorCam and new side deflectors. In addition, some models also include new fuel-saving rear axle ratios.

Connectivity and intuitive operation thanks to the new Multimedia Cockpit

The new Multimedia Cockpit provides the driver with completely new control options and improved operating comfort. Apple CarPlay or Android Auto – never a problem. The Multimedia Cockpit has two large displays. The primary display replaces the conventional instrument cluster. All of the assistance systems and the new traffic sign detection function are shown here, for example. A second touchscreen in the instrument panel serves the operation of selected apps from the Mercedes-Benz Truck App Portal, virtual switches and for the representation of the new navigation system. Valuable for the company owner: real-time monitoring of the truck via Fleetboard and Mercedes-Benz Uptime thanks to the Truck Data Centre.