Daimler Trucks North America says it plans to play a major role in the medium-duty engine market, and is taking the first steps with the new Detroit DD5 engine, which will begin production in October. 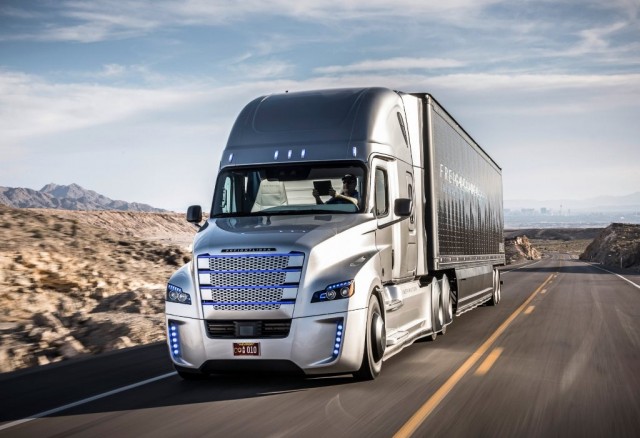 “We didn’t come into this market being cocky; we took a cautious approach,” said Kary Schaefer, general manager of sales and marketing for DTNA, told trucking reporters at an event debuting the engine in California on July 28.

One mark of that approach is that the engine is being released in two phases. In the first phase, it will be targeted at the pickup and delivery market, available in the Freightliner M2106 truck.

“We’re going to launch the DD5 in a limited application,” she said. “We focused on pickup and delivery because it’s the least amount of complexity for us to enter the market. This allows us to gauge customer acceptance of the engine and get customer feedback and incorporate that into the engine for phase two.”

Schaefer said that in testing against competitor engines, the new DD5 offers 3% better fuel economy. Getting there, she said, “was all about optimizing the engine in many many different ways, considering milliseconds and hundredths of millimeters and great attention to detail.”

DTNA says engineers will be able to improve upon this base for future fuel economy improvements, to meet fuel economy regulations or maintain a competitive position in the industry.

The engine already has been certified to meet EPA’s 2017 greenhouse gas and fuel efficiency standards as well as all on-board diagnostic and near-zero criteria pollutant standards.

For phase two, in early 2018, in conjunction with the shift of D5 production from Mannheim, Germany, to its Detroit powertrain facility. Detroit will launch the larger displacement, six-cylinder DD8, which will have a range of 260 to 350 hp. At that time, the DD5 offerings will be extended to 240 hp and applications for power takeoffs will be available. At that point the engine also will be offered in DTNA’s step van and school bus offerings.