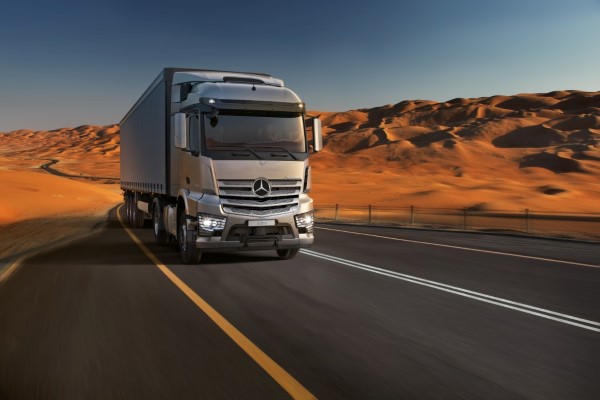 Reliability, efficiency and robustness – these are the criteria that truck customers all over the world look for. And that is as true in the Middle East and Africa regions as anywhere.

Customers using our trucks there face the toughest conditions. Daimler is now taking the latest generation of Mercedes-Benz trucks, in the form of the Actros and Arocs, to more than 40 markets.

Until now, customers in these areas have driven trucks of the previous model generation. Experts forecast economic growth of between two and five percent over the coming years in the Middle East, North Africa and sub-Saharan Africa regions. As far as the global growth strategy of Daimler Trucks is concerned, the launch of the current Actros and Arocs models in these markets marks an important step.

In 2017, Daimler was able to sell more than 35,000 vehicles under the Mercedes-Benz and Fuso brand names across the Middle East, North Africa and sub-Saharan Africa, some 20 percent more than in the year before.

The Mercedes-Benz brand is very highly regarded in these regions. For many transport operators, the Actros has become something of a legend. Many customers continue to operate “Mileage Millionaires”, as they are known – trucks from earlier generations of the Actros that have driven more than a million kilometres, still with their first engine.

All in all, since the market launch of the Actros model series in 1996, Mercedes-Benz has sold more than 100,000 Actros across the Middle East and North Africa. Globally, more than 1,000,000 Mercedes-Benz Actros have been sold since 1996.

Stefan Buchner, Head of Mercedes-Benz Trucks: “Our Mercedes-Benz Actros and Arocs have proved that they can be relied on – as our customers do day in, day out, in many markets around the world.

A truck has to help a customer do the best job possible. And that is as true in the Middle East and Africa regions as anywhere. We are now taking our latest Actros and Arocs models to the markets there, with the aim of leveraging the momentum being experienced across these regions.”

Since the launch of the current generation of the Actros and Arocs series in 2011, Mercedes-Benz has been the clear leader in the heavy-duty truck sector in Europe. Some 300,000 Actros and Arocs have been delivered to customers there since 2011.

Daimler Trucks now aims to continue this success story by becoming the undisputed number one for commercial vehicles in the growth markets of the Middle East and Africa.

The Actros is well known as a reliable and efficient solution in the long-distance and distribution transport sector, while Mercedes-Benz also offers the Arocs in answer to the more extreme challenges presented on construction sites or in off-road use.