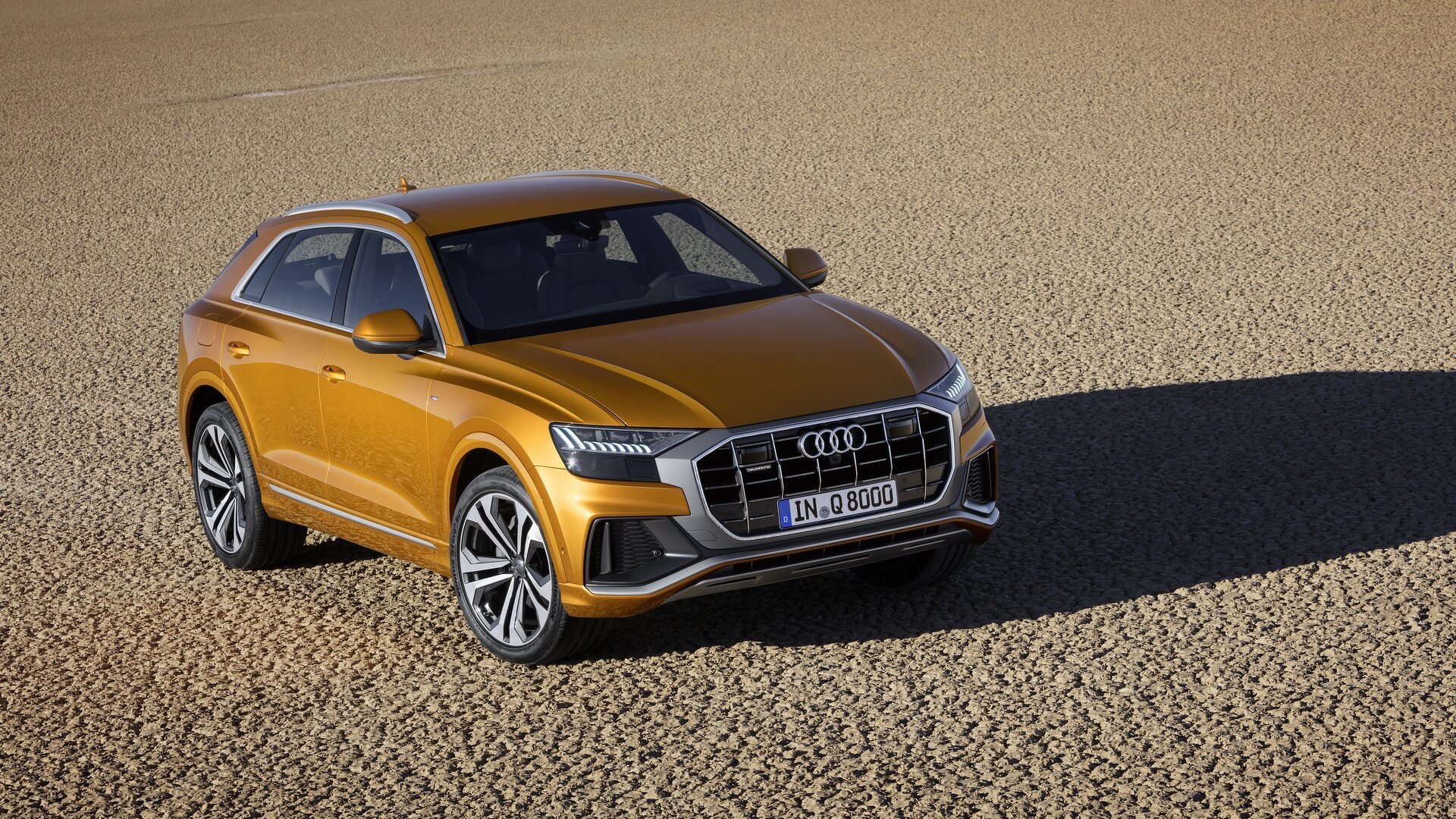 The Audi Q8 combines the best of two worlds – the elegance of a four-door luxury coupe and the convenient versatility of a large SUV. The generously dimensioned interior with variable luggage compartment, state-of-the-art operating and suspension technologies as well as intelligent assistance systems make the Audi Q8 a convincing companion for business and leisure. With the permanent quattro all-wheel drive and a ground clearance of up to 254 millimeters (10.0 in), the SUV coupe can continue when paved roads end. The Audi Q8, which is manufactured at the Bratislava plant, can be ordered in Europe now and will be available at dealers in August. Prices in Germany start at 76,300 euros so expect prices in Malaysia to hover between RM750,000 to RM850,000. A new face for the Q family: the exterior design

The Audi Q8 is a representative of the progressive design language that Audi first brought onto the road with the new A8. Strong contours and athletically tight surfaces convey a feeling of power, sophistication and the special dynamics of the permanent all-wheel drive. The Q8 interprets this in its very own way, as the fusion of an elegant four-door luxury coupe with a large SUV, and with echoes of an Audi icon – the original quattro. With the imposing Singleframe in octagonal design, the Audi Q8 is the new face of the Q family. Six vertical chrome fins make the radiator grille appear upright and solid. A wide, optionally colored mask connects the Singleframe to the distinctive headlights. The spoiler, which is pulled towards the front, and the large, strongly contoured air intakes additionally highlight the aggressive look. Thanks to the frameless doors, the coupe-type roof line stretches low across the vehicle body visually, ending in the a long roof spoiler. The roof line arches slightly towards the flat sloping, strong D-pillars, which are supported by wide, muscular contours – the quattro blisters, reminiscent of the original Audi quattro. The shoulder line stretches the SUV, elegantly connecting the powerful wheel housings. Sporty compact proportions, paired with a very low roof and a flat window form the rear end. A narrow, black high-gloss element with an integrated light strip extends between the rear lights. This is a feature of top Audi models, accentuating the width of the Q8. It creates an independent light signature day or night, just like on the original quattro back in the day. The distinctive diffuser has four vertical fins and an integrated tailpipe trim on each side. For the headlights, Q8 customers can choose between two versions, both in LED technology. From afar, the two-part lights appear very flat. Their top part integrates the daytime running light and the low beam, among other functions. The high beam is positioned underneath, darkened and offset to the back. In the optional HD matrix LED headlights, each consists of 24 individual LEDs. The daytime running light signature with digital character comes in a strongly three-dimensional design for the first time. It consists of seven short segments and two longer ones at the edge of the headlight. The latter shift the visual focus to the outside, highlighting the width of the Audi Q8. The taillight uses a similarly three-dimensional design with its twelve segments – connected by the distinctive light strip which simulates depth.

In connection with the HD matrix LED technology, headlights and taillights do not only feature the dynamic turn signal, but are also set in scene impressively during locking and unlocking. Their harmonious interplay gives the SUV a dynamic character. Q8 owners can use the myAudi app on their smartphone to activate various lighting functions and experience them from the outside – a unique feature in the competitive field. Simplicity is the new premium: the interior design

The upper MMI touch response display is the central element of the interior of the Audi Q8. With its black-panel look, it almost dissolves into a large, black surface when switched off. Simple, easy-to-understand symbols stand for the digital precision from Audi and for the high level of integration of the architecture and operation – simplicity replaces complexity. All fundamental lines originate from the large display, for example the continuous air vent strip with integrated chrome fins and an elegant aluminum-look strip. The slender dashboard and the calm lines with a strong horizontal focus highlight the impression of width conveyed by the interior of the Audi Q8. The styling in the interior is deliberately clean and simple. All elements have a logical connection and harmonize with one another: from the “wrap around” – the large arch running from the front doors across the instrument panel – to the operating unit for the light, which is optionally available in black-panel look and with a touch surface. All this combined gives the interior a feeling of calm. The drive system in the Audi Q8 is strong and highly efficient at the same time, thanks to the new mild hybrid technology (MHEV). It integrates a lithium-ion battery and a belt alternator starter (BAS) into a 48-volt primary electrical system. The rechargeable battery is located underneath the luggage compartment floor and stores 10 Ah of electrical capacity. The dynamic SUV can coast between 55 and 160 km/h (34.2 and 99.4 mph) with the engine switched off, then the BAS restarts the engine quickly and very comfortably. During deceleration, the BAS can recover up to 12 kW of energy. The start-stop range starts as low as 22 km/h (13.7 mph). In customer operation, the technology package reduces fuel consumption by up to 0.7 liters per 100 kilometers (336.0 US mpg). Switchable hydraulic bearings connect the engine to the subframe of the front axle. In idling, they eliminate vibrations with soft characteristic curves while during driving they suppress vibrations from the power unit with higher damping – allowing the powerful TDI to always provide a highly refined ride.

The transmission of forces is provided by an eight-stage tiptronic with fast and soft gear changes. A torsional vibration damper, which acts based on engine speed, mostly compensates the engine vibrations to allow efficient driving even at very low revs. Special ventilation allows off-road use. With its electric oil pump, the tiptronic can engage the gear required for restarting while coasting with the engine switched off.

Clear and distinct: controls and displays

The operating concept in the Audi Q8 needs almost no buttons or knobs. It focuses on two high-resolution touch displays. This allows the brand to demonstrate how it transfers its uncompromising quality claim to the digital world. The upper display with 10.1 inch screen diagonal is used for controlling the infotainment and the navigation system. The lower 8.6 inch display allows the driver to manage the heating, ventilation and air conditioning as well as comfort functions and text input. The driver’s wrist can rest comfortably on the tiptronic selector lever during operation. The MMI touch response concept allows fast and reliable operation. A confirmation click can be felt and heard when a function is selected with a finger tap. The menu structure is intuitively logical and flat like on a smartphone, including freely configurable favorites and start screens.

In addition to all this, the natural language voice control turns the Audi Q8 into an intelligent dialog partner. The system processes all questions and commands in two ways – with information stored onboard and with detailed knowledge from the cloud. Drivers can word  their commands freely. The voice control can, for example, understand the sentence “I am hungry” and accordingly offer suggestions for restaurants close by. MMI navigation plus also includes the Audi virtual cockpit. Its high-resolution 12.3 inch display can be switched between two views – classic and navigation – with the multifunction steering wheel. After market launch, the Audi virtual cockpit plus option will offer a third interface with  a particularly sporty look. The head-up display, another optional feature, projects important information onto the windshield, including detailed lane guidance for navigation.

As standard, the Audi Q8 is equipped with MMI navigation plus, which uses the new LTE Advanced standard for data transfer. The navigation system offers intelligent destination suggestions based on previous journeys. It also draws on the system’s experience of driving times and traffic loads. The route is calculated online on the servers of the map and navigation provider HERE, using real-time data for the overall traffic situation.

The online services from Audi connect add predictive features to the navigation process. This lets the two Car-to-X services for traffic sign information and hazard information benefit from the swarm intelligence of the Audi fleet. Over the course of the year, the on-street parking service will be added, which makes it easier to find a parking space thanks to reported parking operations of the vehicle swarm and detected free spaces.

The optional Audi connect key provides digital access to the Q8. It allows the owner and four additional drivers to lock and unlock the car and start the engine using their Android smartphone. The standard personalization allows the owner to store up to 400 preferred parameters in individual user profiles, for example the position of the driver seat, the air conditioning setting or frequently used media and navigation destinations. In addition to locking and unlocking the Audi Q8, many connect functions can be controlled with a smartphone. Drivers can use the myAudi app to, for example, transfer special destinations to the navigation system, stream music or transfer the smartphone calendar to the MMI. When it comes to operation and to sound and connection quality, the telephone system in the Audi Q8 is of the highest standard, thanks to the Audi phone box and voice-over LTE. The same applies to the sound systems from Bang & Olufsen. The top version with 23 speakers delivers the 3D sound with its treble information to the front seats as well as to the rear. The music unfolds exactly how it was recorded at the concert hall – an extraordinary listening experience.