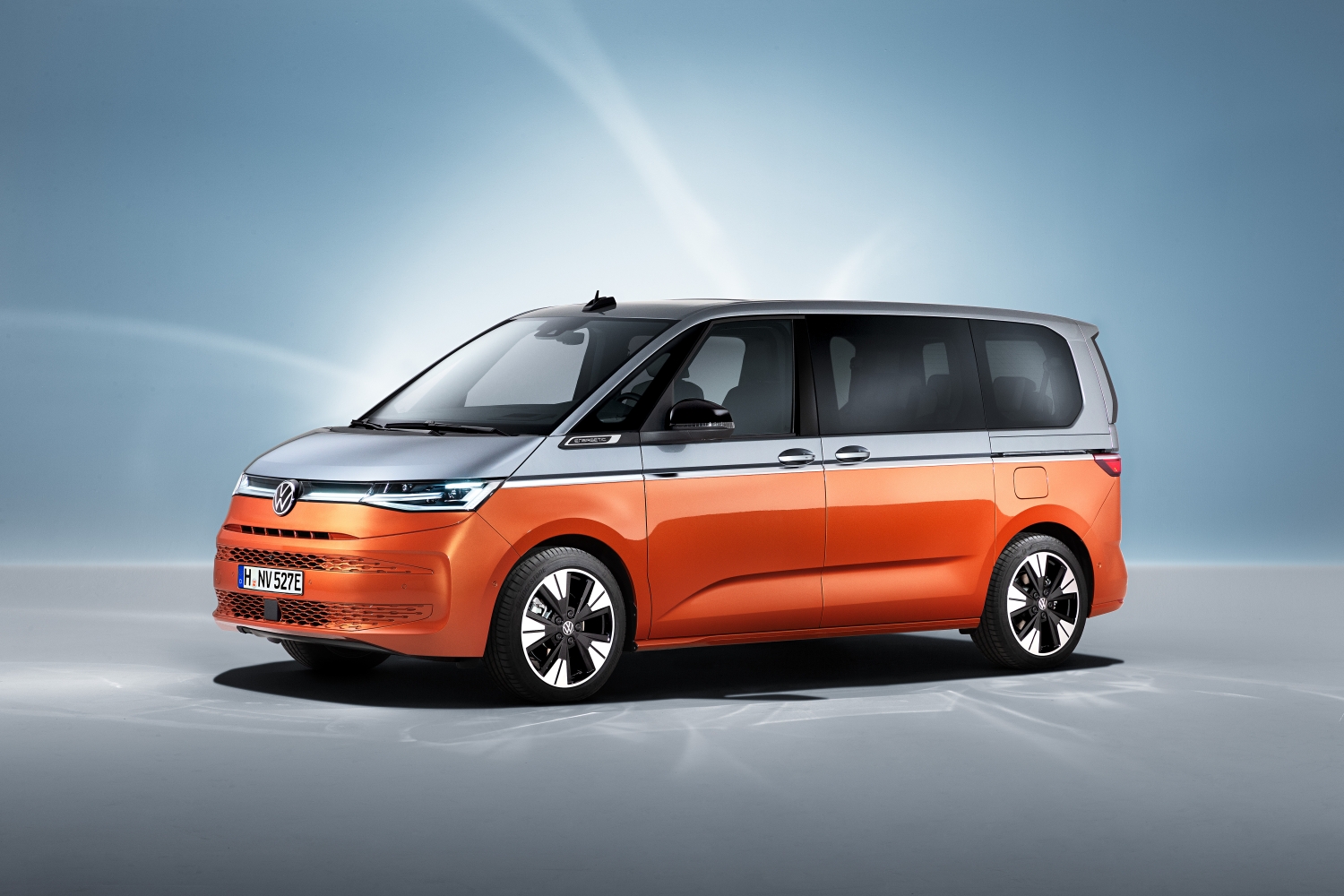 No longer built on the Transporter platform, the all-new model will be based on the Volkswagen Group’s MQB platform.

Tribute to the Transporter T3

The Multivan has an all-new exterior design that pays homage to the DNA of its predecessors, dating back to the 1985 Transporter T3, with a horizontal design line and full-width grille and headlights, to give it a modern and dynamic look.

Overall, it means the new generation has a longer wheelbase and wider, lower profile, all designed to improve aerodynamics, lower fuel consumption and increase range. The model is available with wheels up to 19”, and in three specifications: “Multivan”, “Life”, and “Style”.

Optional is a panoramic glass roof, with LowE laminated safety glass to reduce incoming thermal radiation by 44 per cent, as well as an electrically-operated rear hatch and power sliding doors, which can be operated via gesture control for ease of entry.

The Multivan is fitted with LED headlights as standard but can be upgraded to interactive IQ.LIGHT – LED matrix headlights, which offer a permanent full beam, without blinding oncoming drivers and dynamic cornering to provide precise illumination during bends. The IQ.LIGHT system also features an illuminated LED lateral bar in the radiator grille as a further element of the daytime running lights.

With space for up to seven seats, the rear five seats, which are up to 25 per cent lighter, can be moved and removed to suit, while the second row can be moved 180-degrees to create a conference style seating configuration.

The full-width bench seat for the third row has been replaced by individual seats to allow single seats to be removed for complete flexibility. An innovative multi-function table has also been designed for the new Multivan.

In base version the Multivan offers 469 litres of luggage space behind the third row of seats, extending to 1,844 litres (1,850 litres with panoramic glass roof) behind the second row.

The full cargo capacity up to the front seats is 3,672, extending to a maximum 4,053 litres in the longer version fitted with the panoramic glass roof.

One line of sight

All key features in the new Multivan are now on one line of sight, with a secondary line for other functions to make operation as intuitive as possible.

On the central line are the 10.25-inch ‘Digital Cockpit’ display and the 10.0-inch infotainment touchscreen. Centrally arranged between the two on a high-gloss black surface are the new, minimalist shift-by-wire DSG controls.

Integrated next to this are two USB-C sockets as standard, and a tray for optional inductive smartphone charging. For the first time on a Volkswagen Commercial Vehicles model, a head-up display is available.

All infotainment systems can be combined with a Harmon Kardon sound system developed specifically for the Multivan.

Based on the Volkswagen Group’s MQB platform, the new Multivan, which has a towing capacity of up to 2,000kg, is available with three powertrains, including for the first time in a Volkswagen Commercial Vehicles model, a plug-in hybrid (PHEV) option.

The 13kWh lithium-ion battery is housed under the Multivan’s flat floor, saving interior space and lowering the vehicle’s centre of gravity to improve handling. The charging point is located on the right-hand side of the front wing.

The front-wheel drive Multivan is also available with two four-cylinder turbocharged petrol engines: a 1.5 TSI 136 PS and a 2.0 TSI 204 PS. A four-cylinder turbo diesel, with a power output of 150 PS, will join next year. All of these are twinned with a seven-speed DSG gearbox as standard.