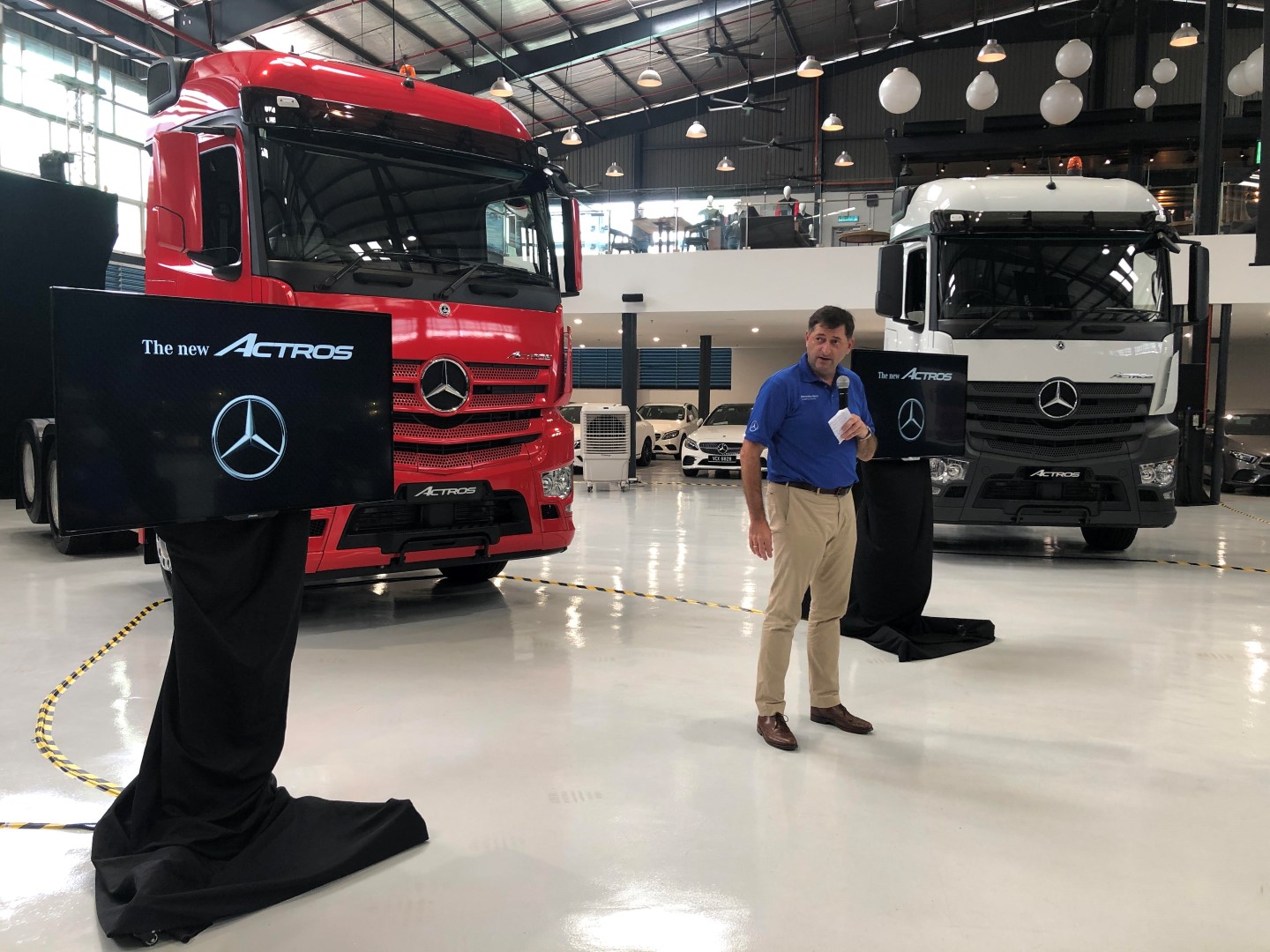 Priced between RM360,000 and RM480,000 for the truck alone, the locally assembled Actros 5 will be offered in 10 variants in our market, comprising 4×2, 6×2 and 6×4 configurations and three cab layouts – the M-Cab, L-Cab ClassicSpace, and L-Cab StreamSpace.

Power comes courtesy of a Euro 3 compatible 2.8-litre 6-cylinder turbocharged diesel engine which makes between 360 PS and 476 PS depending on variant, and distributing all the power is a new Powershift 3 transmission. Peak torque figures stand between 1,800 Nm and 2,300 Nm.

Also worth mentioning here is that the new Actros is also the winner of the “International Truck of the Year 2020” award, which was earned thanks to features like the Active Drive Assist, the enhanced cruise control and transmission intervention system, Predictive Powertrain Control, the fully digital Human Machine Interface in the form of the Multimedia Cockpit, and the state-of-the-art safety systems.

There’s another new key feature that has helped the new Actros to take a further step forward in terms of safety – Active Brake Assist 5, which since the beginning of 2020 has been part of the standard specification for the Actros.

This latest version of the tried and tested emergency braking assistant works with a combination of radar and camera systems. Amongst other things, the reaction to moving individuals in the speed range up to 50 kilometres per hour has been improved.

The new Actros also sets a benchmark with its Sideguard Assist system: in 2016, the vehicle became the first truck to feature a cornering assistance system that was fully integrated into the vehicle architecture. The warning system minimises the likelihood of dangerous accidents occurring on the co-driver’s side of the vehicle during a nearside turn.

During the course of development of the new Actros, Sideguard Assist was linked to the mirror camera system. The system now works hand in hand with the MirrorCam: if Sideguard Assist is installed, the MirrorCam display shows the warning messages of that system in critical driving situations.

Drivers will also benefit from the connectivity solutions in the new Actros such as the new Multimedia Cockpit. The first fully digitalised cockpit in a series-produced truck brings unknown operating possibilities and improved operating convenience.

The Multimedia Cockpit has two large displays, where the primary display replaces the conventional instrument cluster.

A second touchscreen on the instrument panel serves to operate selected apps from the Mercedes-Benz Truck App Portal along with virtual switches, as well as for the representation of the new navigation system. That being said, the new 2020 Mercedes-Benz Actros, which has a service interval of one year/55,000 km, is offered with a three-year/450,000 km warranty.