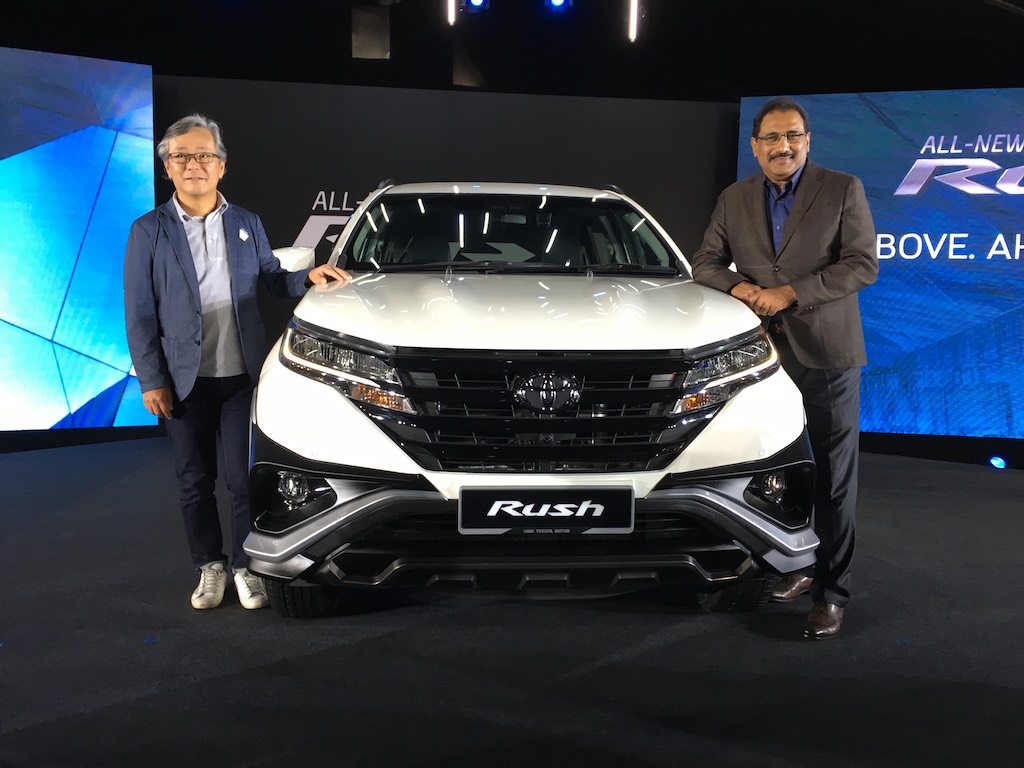 With the new second generation, the All-new Toyota Rush retains the image of an Urban SUV for Rugged-Active Lifestyles, combining the comfort of a passenger car with spaciousness, high seating position, and greater ground clearance of an SUV.

The All-new Toyota Rush also introduces 360-T, a new Toyota approach to provide the best package for customers that will be used in all its upcoming models.  360-T is all about Trust and Technology by Toyota, giving customers a complete suite of innovations, designed to protect and provide total advantage on the road. Three elements make up the 360-T: Safe-T Plus with the latest safety features and systems as a standard feature; Connectivi-T which provides latest technology for connectivity, entertainment and safety; and Guaran-T for total peace of mind throughout the ownership of the vehicle.

The design of the All-new Toyota Rush is an indication of the dynamism that can be expected from upcoming Toyota models. Departing from the conventional form of the first generation, the styling has sharp character lines which give an advanced unique design that is known as ‘R-BLADE’. The ‘R’ stands for ‘Rush’ and the ‘blade’ refers to Metal, Sharp and Edge, while a dual tone theme on the bodywork adds visual impact.

The new image of the All-new Toyota Rush has also been elevated to be more advanced with a premium look and feel that comes with high value-added features, making it even better value for money.

The All-new Toyota Rush is powered by the latest Toyota 16-valve DOHC 1.5-litre engine which has a maximum output of 105 ps at 6,000 rpm with 136 Nm of torque at 4,200 rpm. With a proven and reliable 4-speed automatic transmission that comes with Automatic Stop-Start system, fuel consumption is better and can be as good as 15.6 kms per litre. This qualifies it as an Energy Efficient Vehicle (EEV) under the current Malaysian National Automotive Policy.

Other features include Electric Power Steering (EPS) which contributes to the good fuel efficiency, and tyres with the largest diameter in its class. Despite the large tyre size, the All-new Toyota Rush still has an agile turning radius of 5.2 metres. The seating layout is 2-3-2 over three rows, with easy access to the third row. The cargo capacity is 217 litres but when required, the volume can be expanded to 514 litres by folding the rear seats. Additionally, for those who may have long or large objects (not exceeding 50 kgs); the edges of the roof have integrated low profile rails which the cargo can be placed on.

The new DVD-AVX audio system has a large 6.8-inch capacitive touchscreen and the unit can be linked to a compatible smartphone to ‘mirror’ the smartphone’s screen onto the audio display. This allows GPS navigation apps such as Google Maps and Waze to be used and viewed from the display screen. Other standard features include 13 cupholders, a Multi-Info Display, Panoramic View Monitor (PVM) for a 360-degree bird’s eye view of the vehicle, and a Digital Video Recorder (DVR). A Toyota AutoTag is also installed for electronic payment of toll while the Smart Entry system locks/unlocks the doors with just a touch of the button located on the outside door handles.

Toyota places top priority on safety and has developed many new Active Safety systems which can help the driver avoid accidents. The combination of advanced safety systems plus computer-aided engineering and design has enabled the All-new Toyota Rush to score the highest overall rating of 5-stars from ASEAN NCAP (for both Adult & Child Occupant Protection categories). A new standard active safety feature is the Blind Spot Monitor (BSM) with Rear Cross Traffic Alert (RCTA). BSM helps the driver to be more aware of other road-users in the vehicle’s blind spot, reducing the risk of a collision, while the RCTA is able to warn the driver of approaching vehicles as the vehicle is reversing out of a parking bay.

Also new is the Pre-Collision System (PCS) which helps to reduce low to medium speed accidents due to inattentive driving (only available on the Rush 1.5S). The system, which uses a stereo camera, has four features: Pre-collision Warning, Pre-collision Braking, Front Departure Alert, and Pedal Misoperation Control. The system is designed as a driver assistance feature but gives priority to driver inputs which will override its functions. The All-new Toyota Rush comes with a 5-year full warranty with unlimited mileage. UMWT expects to sell around 3,600 units in 2019 and in anticipation of high demand, the new model will be assembled under contract at Perodua’s manufacturing plant. The estimated price of the All-new Toyota Rush is RM98,000 for the S variant and RM93,000 for the G variant. The model comes with 5 exterior colours choices – White, Silver Metallic, Dark Gray Metallic, Blue Metallic and Dark Green Metallic.  Bookings for the two variants are accepted at all authorised Toyota showrooms nationwide from today.