Just a couple of weeks after images of the 2020 Mitsubishi Expander which was spotted in Malaysia broke the internet, Mitsubishi Motors Malaysia announced that the seven-seater crossover will be launched this year.

Featuring the brand’s ‘Dynamic Shield’ front design concept, the 2020 Mitsubishi Xpander, which will be competing with the Perodua Aruz and the 2020 Honda BR-V, will come with a 1.5-litre engine producing 105 PS and 141 Nm of torque.

“The Mitsubishi Xpander is not just an important model for MMM, but across the ASEAN region as well. As of June 2020, the car has reached cumulative sales of around 256,000 units. The success of the Xpander in our neighbouring countries such as Indonesia, the Philippines, Thailand and Vietnam reflects how well-suited this car is to meet the needs of Malaysian customers. MMM is very excited for a thrilling year ahead with the introduction of this impressive seven-seater crossover in Malaysia later this year,” said Tomoyuki Shinnishi, Chief Executive Officer of MMM.

The Xpander has won multiple awards in ASEAN countries. Some of the prominent awards won were ”2018 Car of the Year” by Otomotif Awards 2018 in Indonesia, ”Philippines 2019 Automobile of the year in the Standard Category” by Auto Focus People’s Choice Awards and “Thailand Car of the Year 2019 and 2020: THE BEST MPV UNDER 1,600 c.c.” by Grand Prix International PLC.

The Malaysian Ministry of Domestic Trade and Consumer Affairs (KPDNHEP) has purchased 55 units of the Perodua Aruz AV, marking the seven-seater SUV’s entry into the government sector and the model’s first fleet deal. A delivery ceremony was held today at the ministry’s headquarters in Putrajaya, where KPDNHEP Secretary-General Datuk Muez Abdul Aziz symbolically handed a mock key over to KPDNHEP Director of Enforcement Dato’ Haji Iskandar Halim Haji Sulaiman. 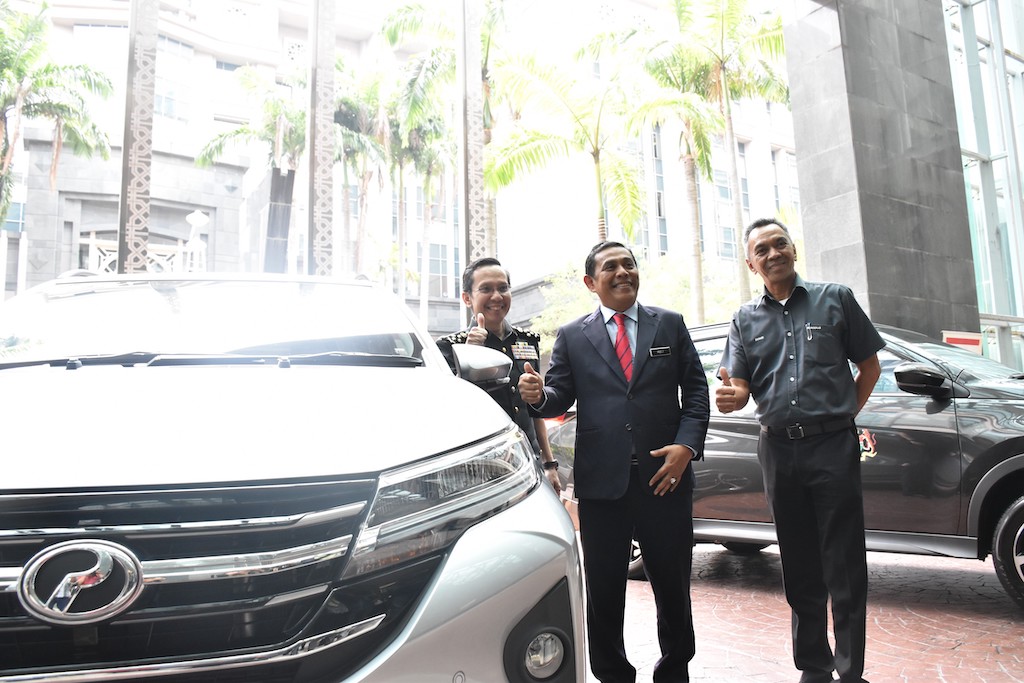 “We thank KPDNHEP very much for choosing the Perodua Aruz and in doing so, supporting the Malaysian automotive supply eco-system, as over 90% of the Aruz’s components are locally sourced. The same is true of all our current models,” Perodua President and Chief Executive Officer Dato’ Zainal Abidin Ahmad said.

With over 23,000 units already sold out of over 33,000 bookings received to date since its launch in January, the Perodua Aruz is Malaysia’s best-value SUV as well as her best-selling SUV so far this year.

“We understand KPDNHEP’s enforcement officers often take long road journeys in the course of duty. The Perodua Aruz is durable, dependable, spacious, practical, easy to drive and due to its many seating configurations, very versatile. Not forgetting conveniences such as the built-in toll card reader, integrated dash cam, HDMI, Smart Link, Bluetooth and navigation.

“Factor in Malaysia’s largest vehicle service network and we are confident that KPDNHEP will find a faithful, useful and delightful companion in the Perodua Aruz,” he added.

Last July, Perodua hosted an engagement session with KPDNHEP in a move to curb imitation Perodua-branded products and parts in the market, becoming one of the first carmakers in Malaysia to take such an initiative.