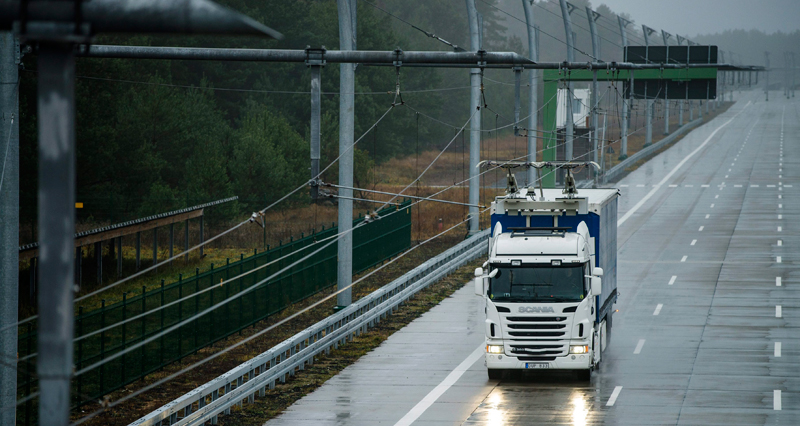 In February 2016, Scania will start testing electric trucks on the electric road which will become a reality as the Swedish Transport Administration has now approved support for the Gävle Electric Road project. The project will demonstrate and evaluate conductive technology, which involves electrical transmission through overhead lines above vehicles equipped with a pantograph power collector.

The investment in the Gävle Electric Road project is in line with the Government’s goal of an energy-efficient and fossil-free vehicle fleet by 2030 and will help to strengthen Sweden’s competitiveness. The project consists of about SEK 77 million in public financing combined with about SEK 48 million in co-financing from the business community and the Gävleborg region.

Scania’s trucks will operate goods transport services on a two-kilometre test route, which is being built between the Port of Gävle and Storvik along European highway 16. The trucks are equipped with an electric hybrid powertrain developed by Scania.

Power to the trucks is transferred from overhead lines through a pantograph power collector mounted on the frame behind the cab. This technology has been developed by Siemens, which since 2013 has conducted trials of electrified trucks together with Scania at its research facility outside Berlin.

The possibility of operating heavy trucks using electricity in this way means that the truck’s flexibility to perform transport tasks using electricity and as a regular hybrid truck is maintained, while up to 80-90 percent of the fossil fuel emissions disappear. Operating costs will be low as much less energy is required due to the efficiency of the electric engine, while electricity is a cheaper source of energy than diesel.

“The potential fuel savings though electrification are considerable and the technology can become a cornerstone for fossil-free road transport services. Electric roads are also a way to develop more eco-friendly transport services by using the existing road network,” says Nils-Gunnar Vågstedt, who is responsible for Scania’s research in this field.

The demonstration facility for conductive technology is part of the Electric Roads Project, which is one of the largest innovation procurement projects currently under way in Europe. In cooperation with the Swedish Transport Administration, the Swedish Energy Agency and VINNOVA, industry and academia will demonstrate and evaluate electric roads as a possible method for reducing the use of fossil energy in the transport system.

Participants in the Gävle Electric Roads project include Gävleborg Region, Siemens and Scania as well as Boliden, SSAB, Sandvik, Stora Enso, Ernst Express, Midroc Elektro, Sandviken Energi, the Port of Gävle, Gävle Energi and the Stockholm School of Economics. The Swedish Transport Administration, the Swedish National Electrical Safety Board and the Swedish Transport Agency have also collaborated closely with the project.

Scania is also participating in another research initiative as part of the Electric Roads Project, where induction technology will be tested in city bus services. A Scania city bus featuring an electric hybrid powertrain will go into daily operation in Södertälje starting in June 2016. There will be a charging station at one of the bus stops where the bus will be able to refill with enough energy in just six-seven minutes to complete the entire journey.