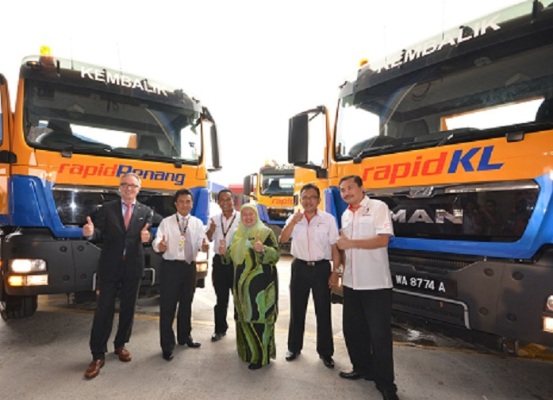 Rapid Bus  Sdn Bhd, which is the bus operating arm of Syarikat Prasarana Negara Berhad (Prasarana), has added three recovery truck amongst its fleet of vehicles for operations in providing world class public transport services in the country.    With the addition of the recovery trucks from MAN Truck & Bus Malaysia (MTBM), Rapid Bus, which operates RapidKL, RapidPenang and RapidKuantan bus services, will be totally independent in cases of recovering its stranded buses and enhancing efficiency in operations. Hailed as the strongest and the top of range recovery trucks, the three vehicles were officially handed to Prasarana – the asset owner of Rapid Bus – in a simple yet symbolic ceremony today at the new Cheras Selatan RapidBus Complex. Prasarana was represented by Rapid Bus Chairman Datuk Ruhaizah Mohamed Rashid and Dato’ Ir.  Zohari Sulaiman, who is also the Chief Executive Officer of Rapid Bus Sdn Bhd and Group Director Bus Division of Kumpulan Prasarana.   MTBM was represented by its Managing Director, Mr Hartmut Mueller. 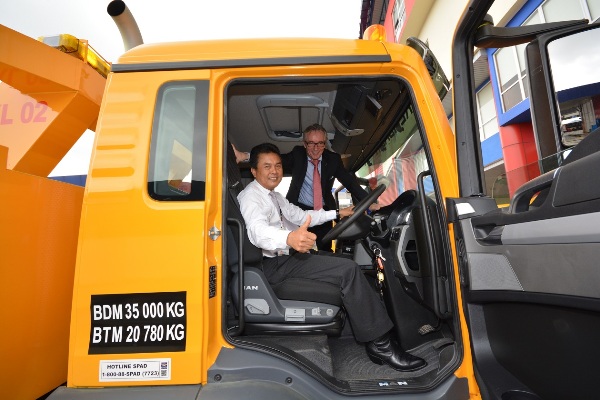 In his speech, Dato’ Ir Zohari said that the acquisition of the rescue trucks was another initiative by Rapid Bus to work towards that aspiration of becoming world class public transport provider. “Imagine the effect in traffic flow in the city if we take too long in towing away the stranded bus and clearing the traffic in the city. With the acquisition of the three rescue trucks, we can ensure efficiency and prevent unnecessary traffic congestion in the city,” he said. While two of the trucks will be stationed at the Cheras Selatan Depot to cover the operations of RapidKL bus services, the other will be despatched to Penang for RapidPenang.   Custom built according to the customer’s requirement, the three recovery trucks will ensure that both RapidKL and RapidPenang will no longer depend on outside contractors if any of its buses need to be towed. RapidKuantan, which operates with 60 buses, will continue to use private recovery and towing companies for the time being. MAN Trucks & Bus are renowned world-wide for their adaptability as the MAN Modification Center offers a wide range of conversions according to customer special request (CSR). In Europe, MAN Trucks offer three thousand different kinds of basic trucks there that allows for 50,000 options. Regarded as the largest and the most advanced heavy vehicles tow-truck in Malaysia, the TGS 33.400 BB-WW 6X4 machines are able to pull up to 90 tons. They are the first ever MAN trucks purchased by Prasarana, which had previously purchased 150 MAN buses for RapidKL.In his speech, Mueller said that MAN trucks have always been the preferred choice in the towing and recovery sector being a body-builder friendly chassis.   “This significantly shortens assembly time and makes it easier for body-builders to make adjustments on the body where needed.  Such truck concepts are used in any heavy-duty operations like military or any special vehicles.   “As such, MAN’s decades of competence in manufacturing towing and recovery vehicles pay off well for customers. MAN’s customers are as diverse as their requirements. That is why, we at MAN, have come up with solutions to meet all these requirements,” he added. Mueller also announced that they would be opening a service centre in Johor Bahru, which would be operating from June 16. “After this, we will move north. We plan to have the northern service centre by year end. One of our aims is to give better after-sales service and these centers will greatly ease those operating MAN buses and trucks for service and maintenance,” he added.