The message was clear: “Mercedes-Benz – eco-friendly thanks to electric drive” was written on the side of the Mercedes-Benz LE 306. The electrically powered light van celebrated its premiere 45 years ago on 13 and 14 March 1972 in Brussels, where it was unveiled to experts at the “Electric Vehicle Study Days” symposium of the International Union of Producers and Distributors of Electrical Energy UNIPEDE (Union Internationale des Producteurs et Distributeurs d’Énergie Électrique). In summer of the same year, the LE 306 then came to the attention of the world public at the 1972 Olympic Games, at which a fleet of the experimental vehicles was in use. A short while later, there was even a large-scale trial with a total of 58 vehicles. This involved cooperation between Mercedes-Benz and the Society for Electric Road Traffic (GES), which was founded in the early 1970s by Rheinisch-Westfälisches Elektrizitätswerk AG in Essen (RWE). 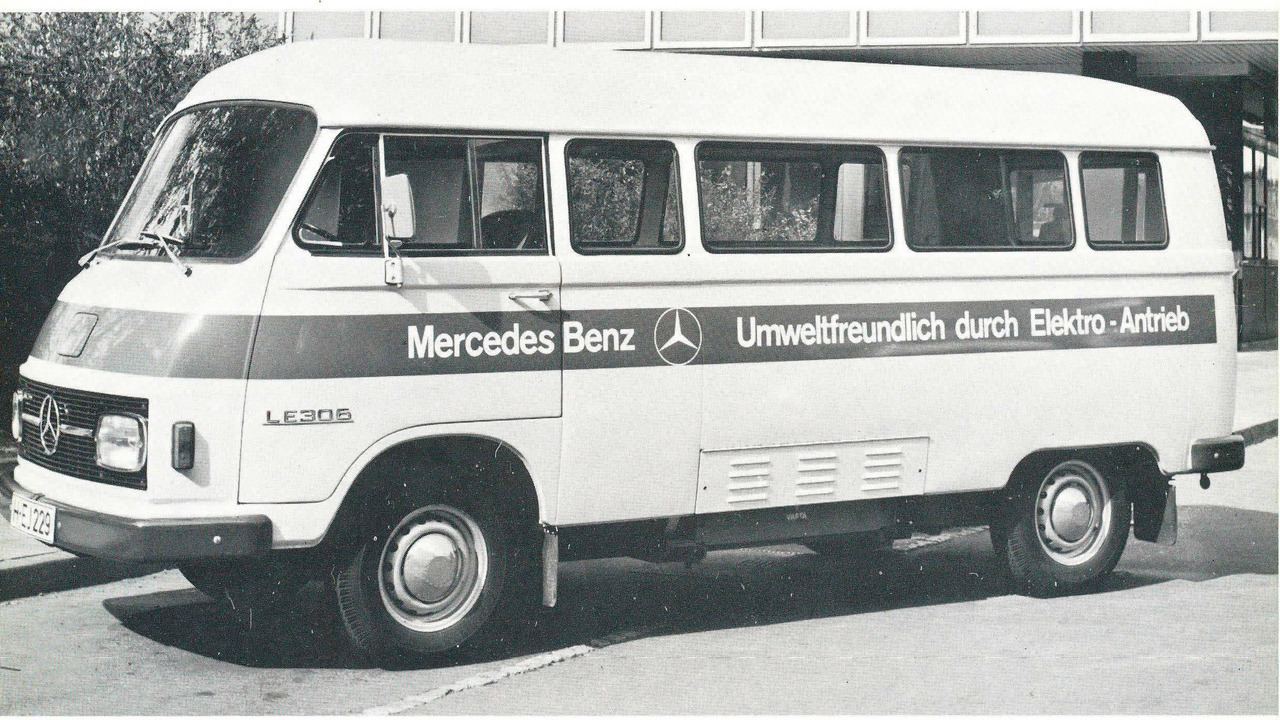 The companies Kiepe (electronic controller) and Varta (battery) were industrial partners in the development of the LE 306. The base vehicle for the LE 306 was the standard-production van available from the Stuttgart-based brand with either a petrol engine (L 207 and L 307, 52 kW/70 hp) or a diesel engine (L 206 D and L 306 D,44 kW/60 hp). Following the takeover of Hanomag-Henschel by the then Daimler-Benz AG, Mercedes-Benz added this light van to its own model range. Its successor was the entirely in-house developed T 1 or TN van, which was unveiled in 1977 and was also known under the name “Bremen van”.

The LE 306 was powered by an externally excited DC shunt motor with 35 to 56 kW output. This, in turn, drew its energy from a battery weighing 860 kilograms with a voltage of 144 V and a capacity of 22 kilowatt-hours. This was enough to allow the light van with a payload of one tonne to be driven between 50 and 100 kilometres at speeds of up to 80 km/h.

To extend the range to a practical area of use, the engineers devised an exchange system for the energy storage unit: the “slide-through horizontal exchange technique” made it possible for the battery to be replaced in just a few minutes. “At the charging station, the discharged battery is pulled out from the side, while a new one is simultaneously slid in from the other side. It all takes no longer than a normal fuel stop,” stated a Mercedes-Benz brochure on LE 306 from 1974.

During breaks in operation, the battery could also be charged with mains power while still in the vehicle. In addition, the motor acted as a generator during braking, the kinetic energy being converted to electric energy, which was then stored in the battery. The same efficient principle of energy recovery is used in present-day hybrid and electric vehicles.

Forty-five years ago, the LE 306 was a milestone set by Mercedes-Benz on the road to the electric vehicles of today. This seems to have been sensed by the trade magazine “Lastauto Omnibus” in its issue No. 4 of 1972, which reported on the prototype unveiled in Brussels: “There is little to distinguish the electrically driven Mercedes van from vehicles powered by internal combustion engines. It is easier to operate than a vehicle with an automatic transmission.”

The magazine was still critical about the range and cost of the batteries. “In our opinion, the success of the electric powertrain will hinge on the development of new energy storage units,” it concluded in 1972. Admittedly, the lead batteries employed in the LE 306 were still closely related to electric storage devices of the kind that had been used some 70 years previously in electric vehicles at the start of the 20th century. 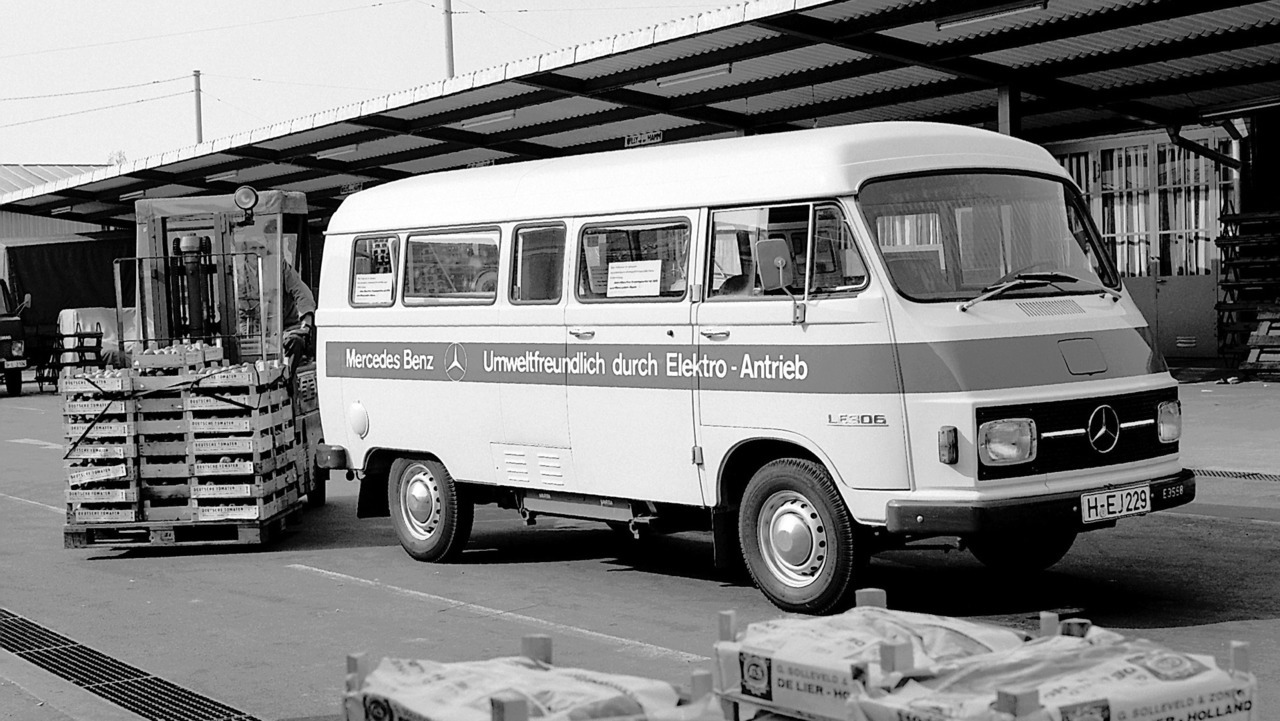 From 1906 to 1912, the Austrian Daimler-Motoren-Gesellschaft (DMG) manufactured Mércèdes Électrique electric vehicles with battery-electric wheel hub motors (from 1909, the same model was also produced by DMG in Berlin-Marienfelde). These were available in numerous body variants from cars to variously sized commercial vehicles to fire trucks. At the same time, Mércedès Mixte hybrid models were also in production. Both technologies were resurrected by Mercedes-Benz researchers around 1970. As early as 1969, for example, the company unveiled the OE 302 hybrid omnibus at the International Motor Show (IAA) in Frankfurt am Main.

After the LE 306, Mercedes-Benz further developed the electric drive in various vehicle types, which regularly included vans: the T 1 served as a basis for the 307 E postal van (1980) with 1.45 tonnes payload and a range of 70 kilometres as well as the 308 E municipal vehicle (1988). Having been tested in a field trial on the Baltic island of Rügen with a variety of battery systems (sodium-nickel chloride, sodium-sulphur, nickel-cadmium), the MB 100 E (1992) was available from 1994 with lead gel batteries.

The range of Mercedes-Benz electric delivery vans increased with every stage of development: the Sprinter 308 E (1995) achieved a range of around 100 kilometres with a so-called zebra high-energy battery, while the Vito 108 E (1996) could travel as far as 150 kilometres with a sodium-nickel chloride battery weighing 420 kilograms. Although the contemporary automotive market is not yet ready for the large-scale use of such vehicles, the continuous research and development work of the Stuttgart-based brand brings the concept of locally zero-emission vans closer to everyday use with each new vehicle design: the Vito E-CELL with lithium-ion battery (2010), the new EQ product brand and the connected, all-electric “Vision Van”. Unveiled in 2016, this concept vehicle showcases ideas for the development of future generations of vans from Mercedes-Benz.