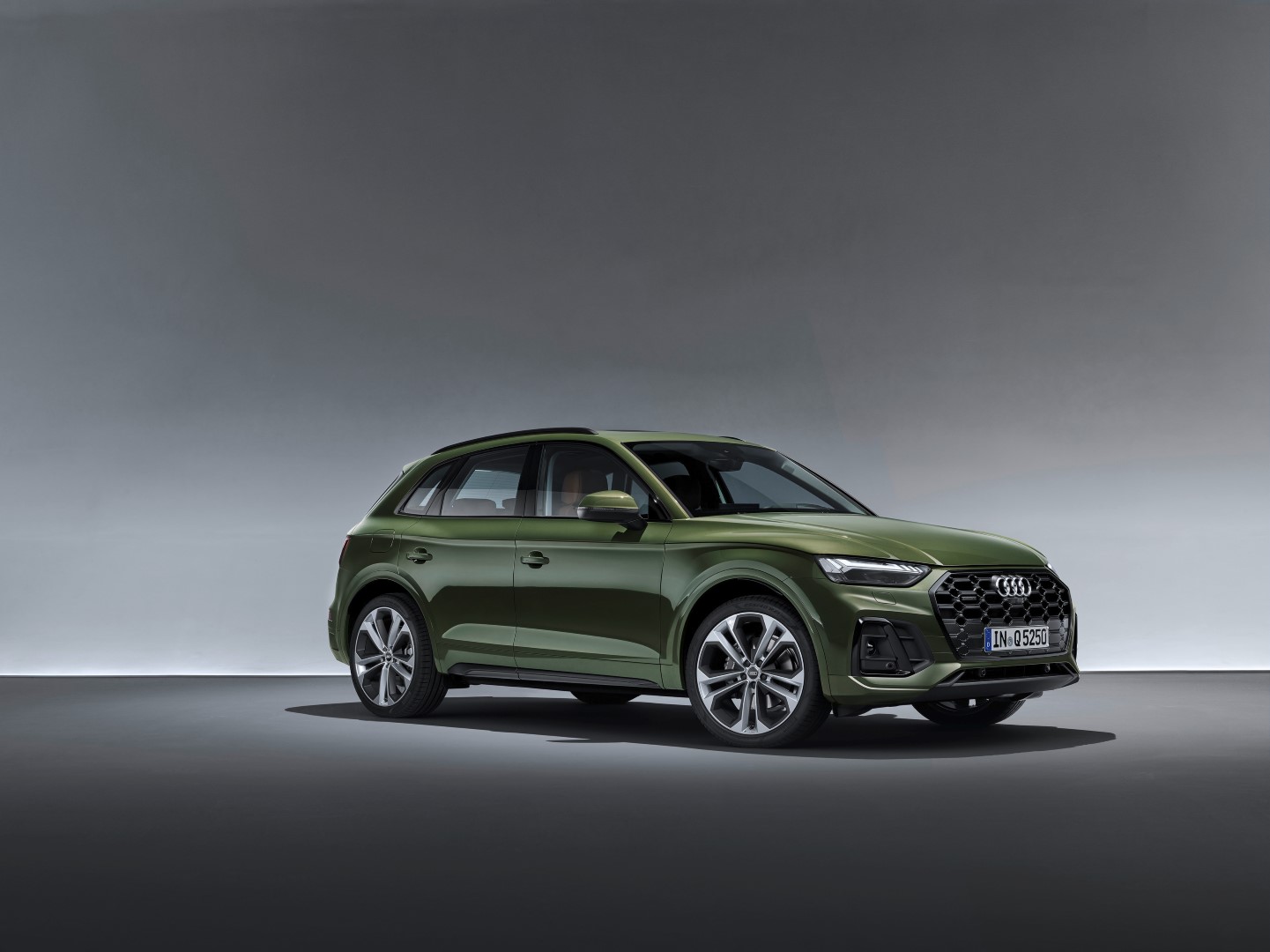 Measuring 4.68 meters long, the redesigned Audi Q5 is now 19 mm longer than before – due primarily to its larger bumpers. Its width of 1.89 meters and height of 1.66 meters remain unchanged.

If we look at the new exterior, the octagonal Singleframe grille is now shallower and appears wider than before, while the side air intakes have grown in height and are now structured by trapezoidal insets.

The upper section of the LED headlamps features a new signature for the daytime running lights. Viewed from the side, the Q5 now has lighter look with greater ground clearance thanks to the redesigned sill insert.

At the rear end, available for the first time in the world is a pair of OLED taillights (optional), complemented by a new trim element between the light clusters and a new diffusor insert with a horizontal fin.

The optional OLED rear light is split into three tiles of six segments each, which enables Audi designers and developers to create different light designs and signatures from a single item of hardware.

Also new are two body colours – District Green and Ultra Blue. The black trim package is available as an option.

Inside, a new freestanding MMI touch display with acoustic feedback takes centre stage, while the previous rotary/push control on the centre-tunnel console has been replaced by cubby holes.

There are three interior finishes for customers to choose from – base, design selection, and S line, which can be combined as desired with the exterior trim packages.

Behind the new control setup in the updated Audi Q5 is a new main unit – the third-generation Modular Infotainment Platform (MIB 3), which offers ten times the computing power of its predecessor, the MIB 2.

Its basis is a conventional dashboard with a centrally positioned driver information system. The top of the range is the Audi virtual cockpit plus – a high-resolution 12.3-inch digital display with three different graphic layouts. The driver controls the displays via the multifunction steering wheel. A head-up display is also available as an option.

The central 10.1-inch MMI touch display is standard equipment in the Q5. Its menu structure with flat hierarchies makes it extremely easy to use, and is searchable using free text.

The driver has the choice of entering characters and letters manually or via voice control, which understands a vast array of everyday terms. Combined with the MMI navigation plus infotainment system including Audi connect navigation & infotainment, the voice-control system can access the cloud for even greater flexibility.

As for powertrain options, the upgraded Q5 will be sold in Europe as the Audi Q5 40 TDI which comes with a mild hybrid 2.0-litre four-cylinder turbodiesel TDI engine producing 204 PS and 400 Nm of torque, paired with a seven-speed S tronic dual-clutch transmission as well as a quattro all-wheel drive system.

More engine versions will follow after the launch of the updated Q5: two further power variants of the four-cylinder TDI, a V6 TDI and two 2.0-liter four-cylinder TFSI engines.

Another highlight of the new Audi Q5 is that customers can now order a special edition of the redesigned Audi Q5 named “edition one”.

The exterior design is based on the S line exterior, further enhanced by the black trim package. The specific design elements set sporty accents with a black Audi insignia front and rear as well as on the rear doors, black roof rails and black exterior mirrors as well as carbon door trim. On entering the vehicle, the Audi rings are projected onto the ground by LED lights. The equipment package also includes red brake calipers, 19-inch wheels and sports seats.

The exterior paint colors are Glacier White and Myth Black in addition to new shades, District Green and Ultra Blue.