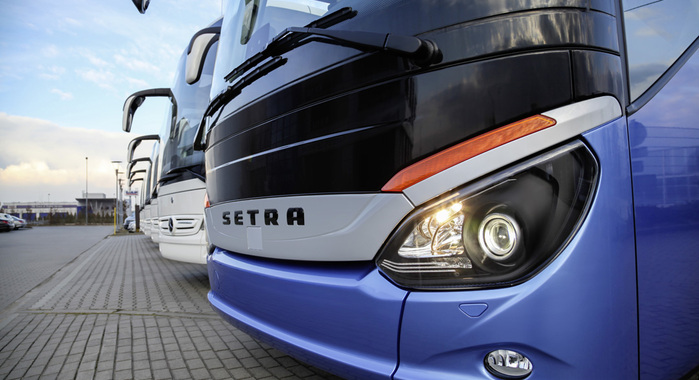 Antonio Cavotta, director of EvoBus Polska, handed Rafał Jańczuk, the owner of the firm Raf Trans, the symbolic key to his new fleet on the premises. At the handover Rafał Jańczuk commented: “Back during my first visit to the Mercedes-Benz Mannheim bus and coach plant in the year 2000, I decided to place my trust in the vehicles from Daimler Buses as of then and since that time I have been systematically implementing my decision”. Antonio Cavotta added: “We congratulate Raf Trans on the purchase of these buses and say a big thank you for the long-term partnership and the trust in our products and our company”.

The 60 Tourismo touring coaches have been equipped to match the luxury travel company’s high-end offering. In the interior, passengers can expect to be greeted by Travel Star seats, which are adjustable on the aisle side and have been developed specifically for touring coach operation, and also include two-point seat belts, luggage nets and aisle-side hinged armrests. A galley, toilet, audio/video system, high-performance air conditioning system and also tinted windows throughout round off the comfort appointments available on board the vehicles.

The vehicle is driven by OM 470 Euro VI BlueEfficiency Power engines generating 290 kW (394 hp). Gear shifting is taken care of by the power-assisted GO 210 six-speed transmission. The safety devices include the systems already available as standard in the Tourismo such as the advanced emergency braking system (AEBS) and the Lane Assistant (SPA). As an additional safety feature, the company also opted for Litronic headlamps and reversing cameras for the vehicles.