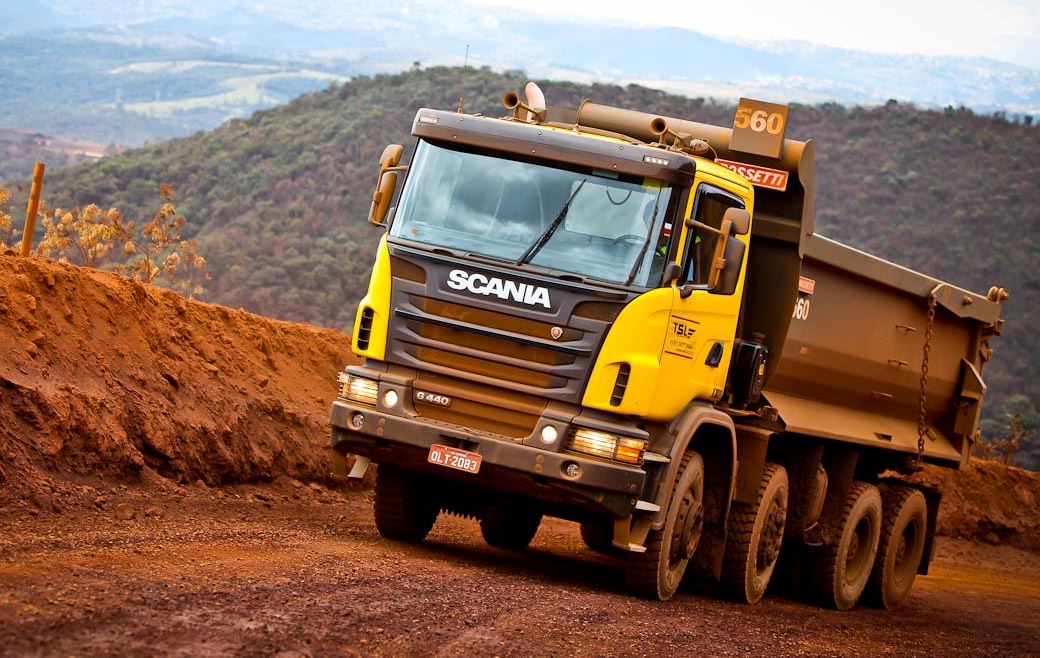 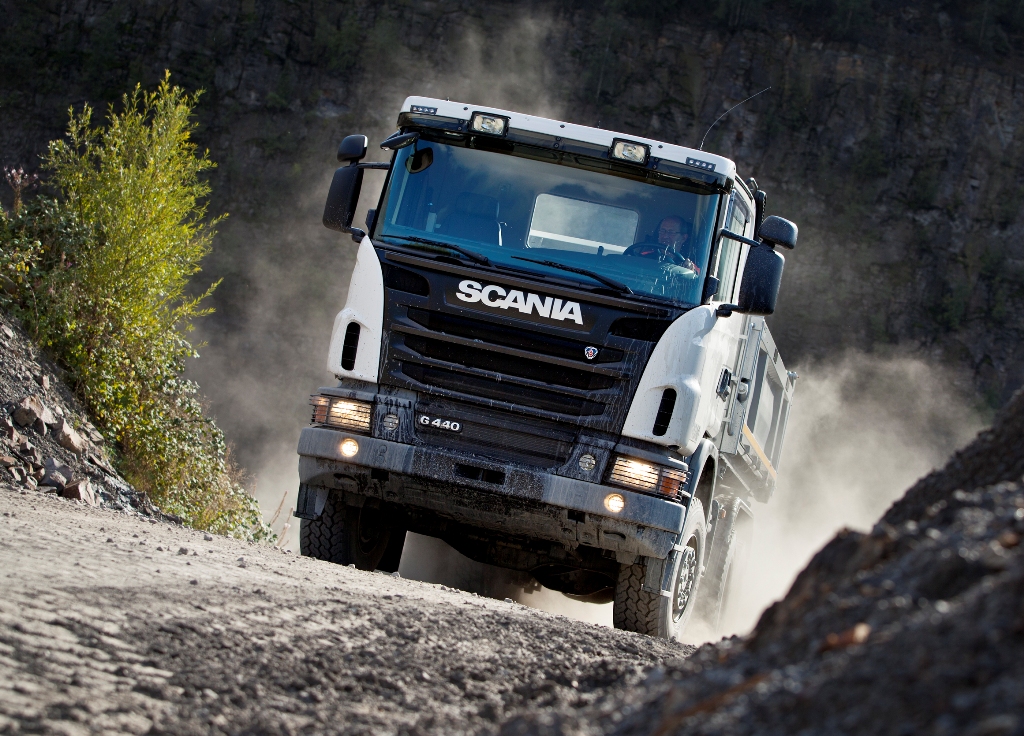 The Scania G440 has a lot to offer. However, it seems to be designed foremost for use on roads. It is not a genuine, robust off-roader.The G440 only weighs 295000 lbs. (13 400 kg). That is not very much for a four-axle dump truck. The educated eye might expect one ton more. The slim waistline of the Scania is largely due to its superstructure made by Dautel, who requires 5-mm-thick Hardox steel for the floor element. The sidewalls are made of aluminum.

And then there is the Scania G 440 CB8x4MHZ. This code signifies a 440 HP four-axle truck for medium-heavy use (M) with a high frame (H) and leaf springs on all axles (Z). Scania uses the term “medium-heavy use” in the sense of the pejorative German term “street dump truck.” Heavy duty is not the strong suit of the medium-heavy Scania—for starters because it lacks an auxiliary frame. But it is here, where the truck saves a lot of weight. 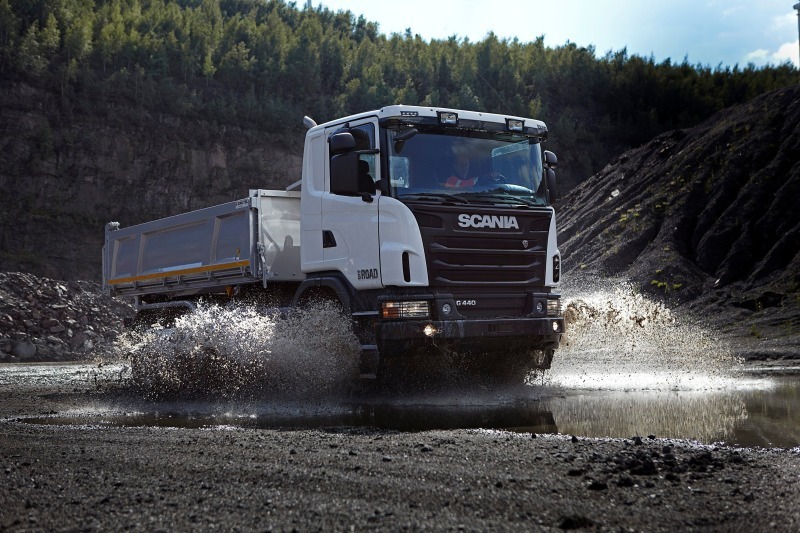 Scania also equipped the dump truck with disk brakes on all wheels. Here, the Swedes had to rise above themselves. But it saves a few more kilograms. Further weight-saving measures were could be seen under the sheet metal. The test dump truck uses EGR instead of SCR for Euro-5. This requires a 13-liter instead of a 12-liter displacement, but the Scania can do without the SCR catalytic converter and the Adblue tank, which is again a tidy little number of pounds that the G 440 does not take to the scale.

As a result of all this weight reduction, the empty weight of the chassis remained below 10 tons—9.5 ton to be exact. That makes a major difference for the payload. Nevertheless, the G 440 is not scrawny when it comes to the cab or power train: the G-cab is anything but tight, and the 13-liter EGR engine easily outclasses its competitors in the respective performance classes. 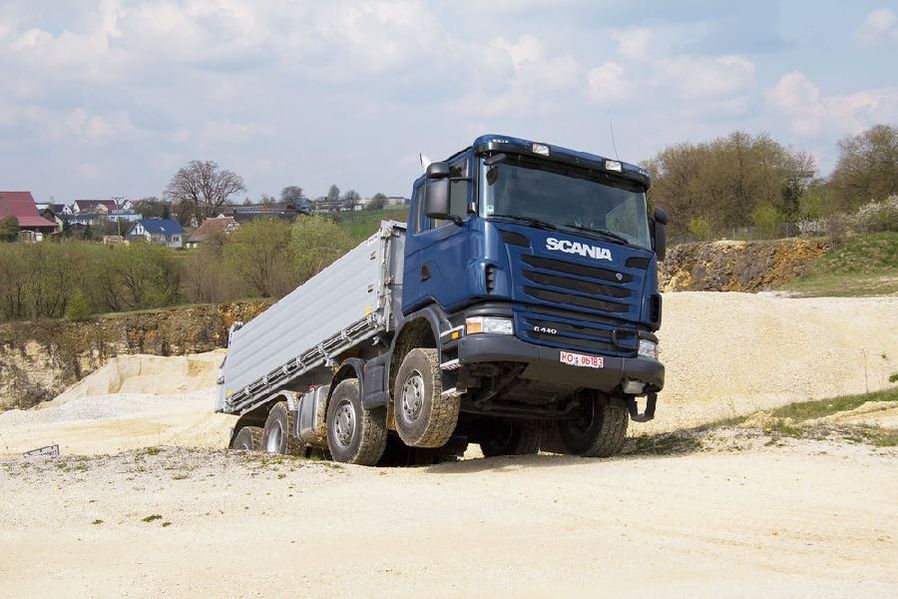 The cockpit fits snugly around the driver, as one would expect from Scania. This is pleasant, in particular when driving on the freeway. In heavy terrain, however, other factors become more important. Scania has abandoned the cumbersome rocker switches for the differential locks. They were replaced by functional rotary switches. A flatter dash board would have made it easier to move to the passenger side while the truck is standing. At least, there is no longer a shift lever in the way, since Scania now offers the Opticruise transmission, which includes a kind of all-terrain mode, for construction vehicles as well.

The Scania offers its drivers a number of additional conveniences inside. This does not only include generous space but also a small drawer in front (with a mini-tray on top) for the G 440 dump truck. The drawer is located in the middle of the 11-inch (280 mm) high engine tunnel of the G-cab, as well as a framed, open tray in front of the passenger seat, on which various odds and ends can be placed. A few more trays are located below the roof at the front of the vehicle, and a slightly larger, open console with two cup holders is located on the rear part of the engine tunnel. This is really necessary, since the door tray does not have any storage room of this kind. Lots of empty space is available behind the seats, where stuff can be freely stacked. 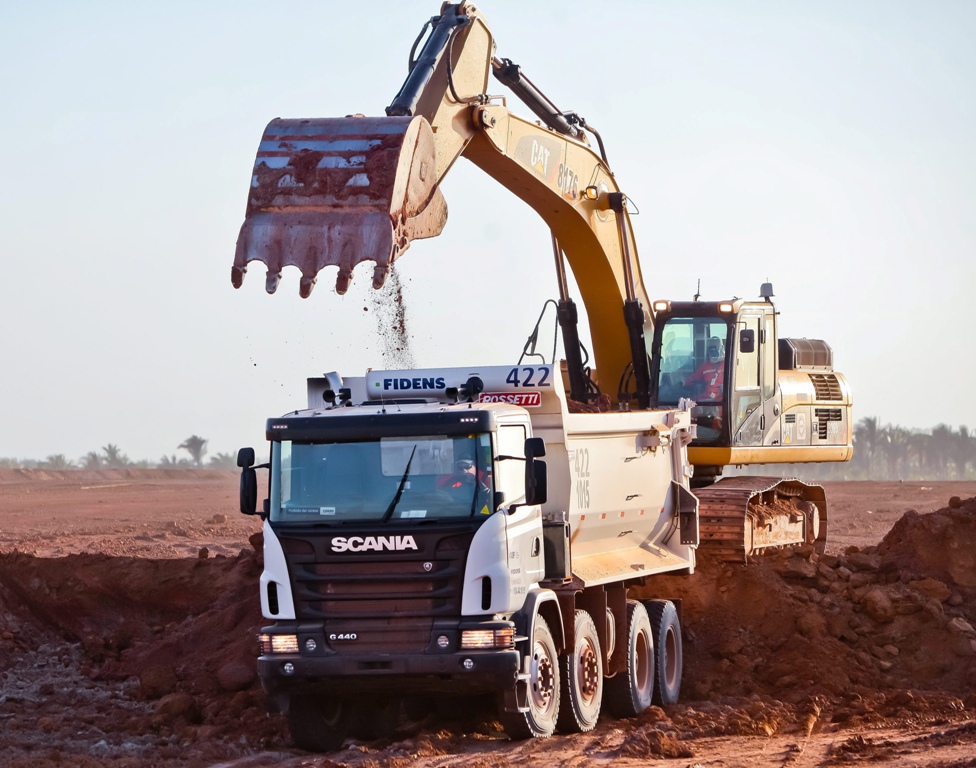 The access is slightly higher than in the P-series. When the G 440 is equipped with 385/65 R22.5 tires, the driver must climb exactly 50 inches (1.27) meters upwards. The climb starts with the first step at only 13 inches (330 mm). This puts the step is in a perilous zone not exactly conducive to a long service life.

The engine is more trust-inspiring. It provides 1700 lb-ft (2300 Nm) of torque at 1000 rpm. The engine retains this torque until 1300 rpm, which produces almost 430 hp. Knowing that exhaust gas recycling makes the engine more susceptible to high fuel consumption at higher rpm,  the Scania engineers designed the EGR engine that makes rpm above 1500 rpm generally unnecessary, . This concept is supported by the long gear ratio of 3.93 for the rear axle transmission. This, when combined with the leant GRSO905 overdrive transmission, results in a theoretical maximum speed of 73 mph (117.5 km/h) and ensures moderate rpm of approx. 1360 rpm when driving at 53 mph (85 km/h) on a freeway. However, the twelfth gear is almost unsuitable for country roads – in spite of the 1700 lb-ft (2300 Nm), because the engine is just tooling around at slightly more than 1000 rpm in this gear.

The eleventh gear seems perfect, however, for country road speed. The engine then does approx. 1300 rpm. All reserve power is immediately available. However, one wonders whether the twelfth gear would not be a bit more economical after all – assuming the power is sufficient for this gear ratio. Not only drivers keep wondering. The Opticruise is undecided, too, but stays prudently in the eleventh gear for most of the time.

The dump truck must cope with the relatively narrow transmission spread (11.3). The Scania already races ahead in first gear, reaching 6.5 mph (10.5 km/h) at 1900 rpm. This causes trouble for the engine, in spite of its 1700 lb-ft (2300 Nm) torque. Reasonable maneuvering options are absent, unless the crawler gears are selected right away. There are two of them available, at gear ratios of 13.3 and 10.6. They finally increase the transmission spread to at spread of 16.4, usable for off-road use even with the 3.93 axle. However, the G 440 is still lacks bite. The final speed in the lower crawler gear is still 4.4 mph (7.1 km/h). The reverse gears are too long anyway; the final speed in the lower reverse gear is almost 5 mph (8 km/h).