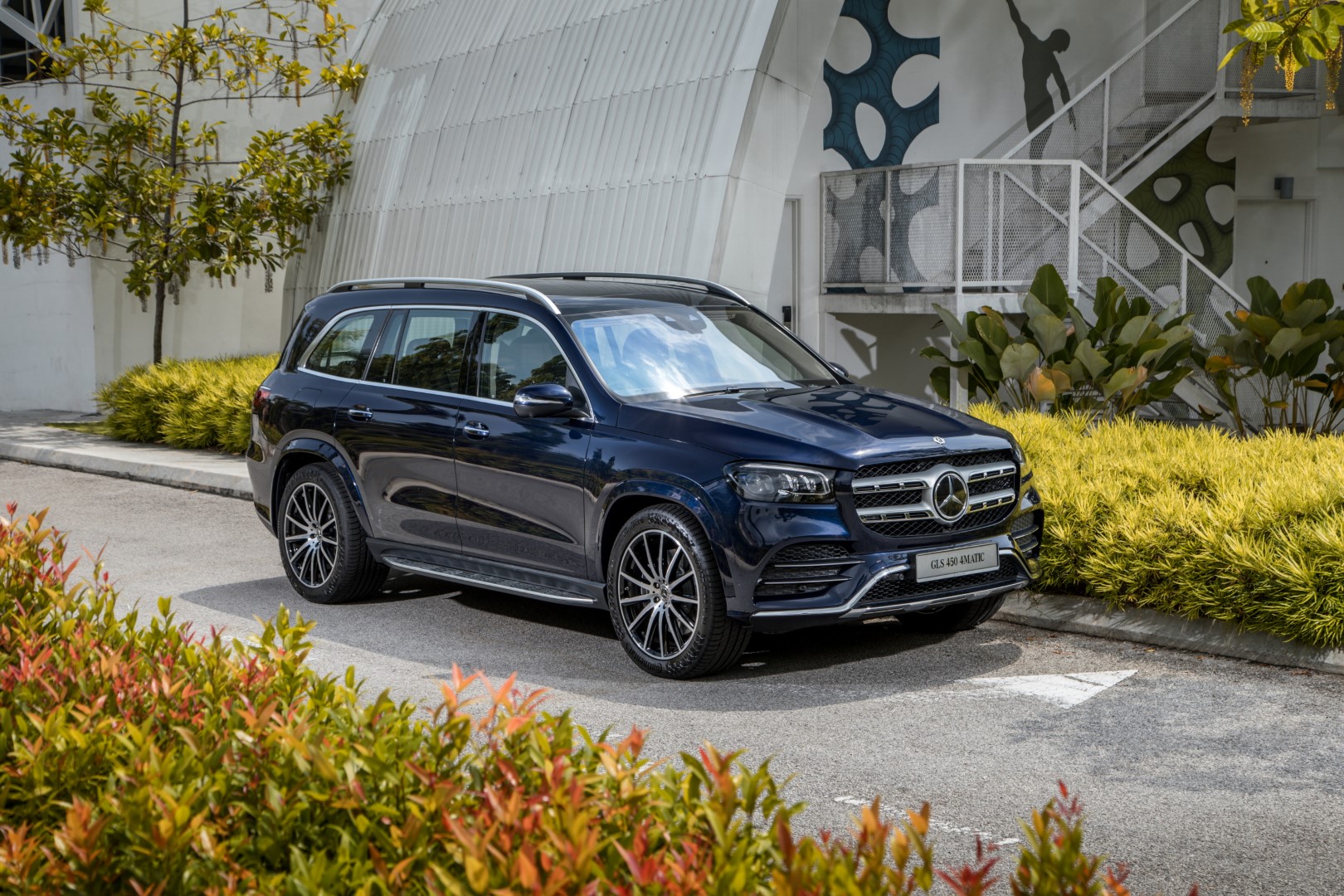 The GLS 450 4MATIC AMG Line is powered by the 3.0-litre six-cylinder in-line engine electrified with 48-volt technology. It produces 367 hp and 500 Nm of torque with a further 250 Nm of torque and 22 hp via the EQ Boost over short periods.

The power is transmitted by the 9G-TRONIC 9-speed automatic transmission. The broad ratio spread of gears one to nine allows a clear perceptible reduction in engine speed and is a decisive factor behind the high level of energy efficiency and ride comfort.

The GLS comes with the enhanced AIRMATIC air suspension system with Adaptive Damping System Plus fitted as standard. This setup uses highly complex sensor systems and algorithms to adapt the damping characteristics to the road condition and driving situation in real time.

All components have been enhanced compared with the previous generation, and the wheel suspension mountings have been optimised to maximise ride comfort. In addition to this, the air suspension keeps the car at the same level, regardless of the load on board.

Measuring 5207 mm in length and 1956 mm in width, with a wheelbase length of 3135 mm (60 mm longer than its predecessor), highlights on the GLS’ exterior include the upright radiator grille in an octagonal SUV interpretation, the prominent, chrome-plated underguard in the front apron with the bone-shaped air inlet grille, and the bonnet with two powerdomes.

This striking appearance is emphasised by the distinctive headlamp design by day and night. The GLS is equipped with MULTIBEAM LED headlamps, with a total of 112 LEDs per headlamp.

The GLS cuts an imposing figure from the rear, too. This is particularly ensured by the powerful shoulder muscle extending from the rear doors to the tail lights, which enables the GLS to strike an imperious pose on the road.

The two-piece tail lamps are based on LED technology, and their high-calibre, three-dimensional look conveys depth and solidity. The reflectors are relocated lower down, giving the tail lamps a flatter appearance. They are crowned by a slender, continuous chrome trim strip. The rear is strikingly rounded off with the chrome-plated underguard.

Inside, the central element in the dashboard’s design is an impressively sized screen unit embedded in a distinctive dashboard support. The dashboard support flows into the door panels, and the integral trim element likewise extends to meet the doors.

The prominently wide, raised centre console creates a robust contrast with the free-floating appearance of the dashboard. As a typical feature of off-roaders, there are two prominent grab handles on the centre console. Apart from good ergonomics, fluent leather surfaces create a modern, luxurious impression, rounded off by a broad area of trim and flush-fitting sunblinds. The controls with haptic and audible feedback appear to have been milled from a solid metal block.

The large touchscreen of the MBUX infotainment system allows all the GLS comfort features to be controlled from the driver’s seat. Very fine chiselling and the pyramid structures of the trim surfaces show the desire for perfection and craftsmanship. The new multifunction sports steering wheel with its striking spoke design accentuates the impressive appearance of the SUV’s interior.

The new GLS has a considerably longer wheelbase than its predecessor (3135 mm, an increase of 60 mm). This creates more space, especially in the second seat row, which can furthermore be adjusted fore and aft. Legroom here is increased by 87 mm when the seats are in their rearmost position, which also makes it easier to get into the vehicle. The second row has a 60:40-split folding rear bench seat with adjustable 40:20:40-split backrests.

All seats are electrically adjustable as standard. The same applies to the EASY-ENTRY function, which makes it easy to get into and out of the two individual seats in the third row. For this, the seats in the second row move a long way forwards and fold forwards.

A push of a button is all that is required to stow away the comfortable seats and make full use of the 2400-litre boot space in the GLS. The switches on the left and right of the load compartment and on the front of the wheel arches on the front-passenger side in the C-pillar area allow the seats in the rear rows to be folded completely flat.

It is also possible to fold down all the seats simultaneously by pressing the “ALL” button. The carpet-trimmed backs of the backrests form part of a flat, practical load area. Another push of a button lowers the boot sill by approx. 50 mm to make it easier to load heavy items.

The MBUX Rear Seat Entertainment System is available for all seating variants – for even more entertainment and convenience. It includes two 11.6-inch touchscreens that allow passengers in the second row to enjoy movies or music, use the integrated web browser, or call up and input trip information.

Each screen displays the content selected by the individual user. In addition to the options offered by the MBUX infotainment system, users can also play their own media from a mobile phone, tablet or laptop.

With the Mercedes me connect, the GLS is virtually in your pocket. It puts a world of remote features, from starting the engine to locking its doors to scheduling service, in a handy smartphone app.

Other standard features include: