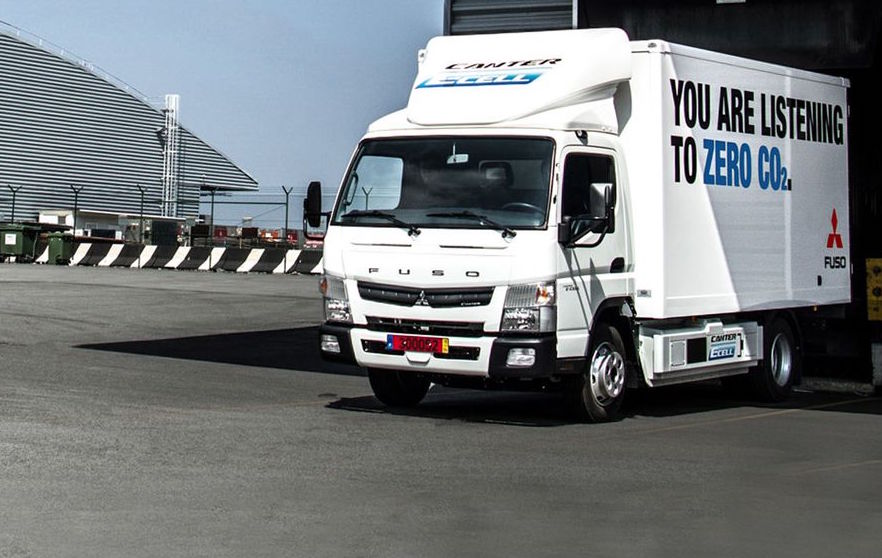 Mitsubishi FUSO Truck and Bus Corporation (MFTBC) recently celebrated the start of production of the world’s first all‑electric light-duty truck, the FUSO eCanter. FUSO is a brand of Daimler Trucks Asia. The event was held at the production plant in Tramagal, Portugal, where all eCanter for the European and U.S. markets will be produced in line with the conventional FUSO Canter truck. 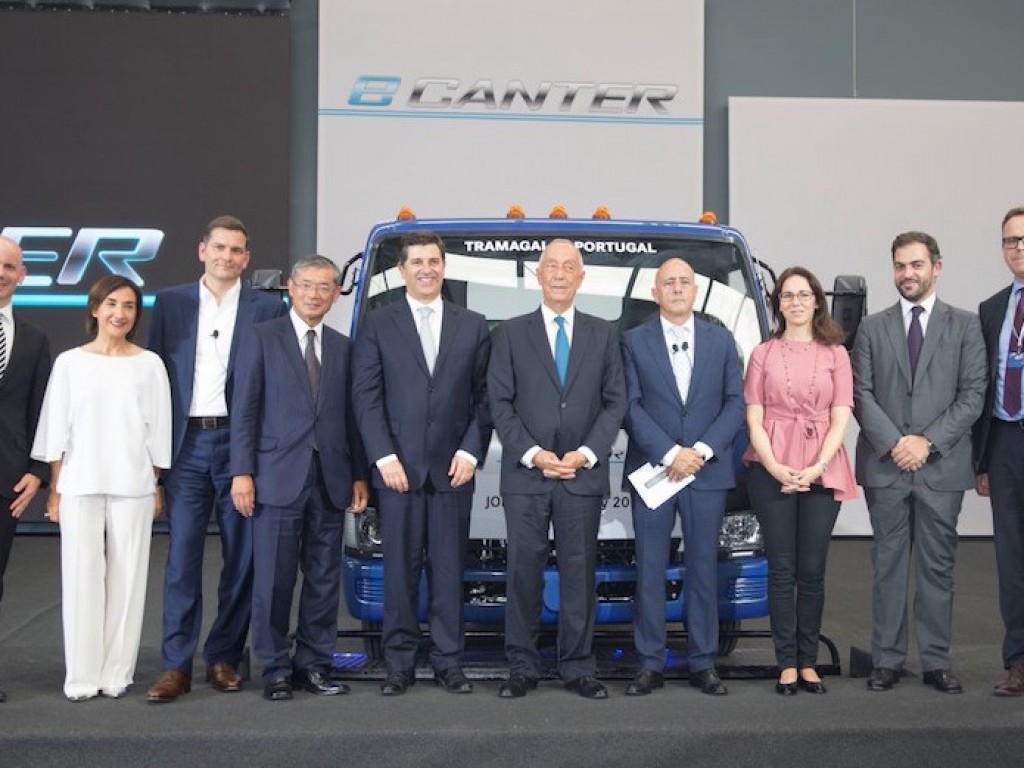 The Portuguese government has been supporting the development of the eCanter since the early stages in 2010. The President of the Portuguese Republic, Marcelo Rebelo de Sousa, joined members of the government, Mitsubishi FUSO Truck Europe and MFTBC executives at the event.

Marc Llistosella, President and CEO of Mitsubishi FUSO Truck and Bus Corporation and Head of Daimler Trucks Asia said at the occasion: “With today’s start of production of the eCanter, we become the first global manufacturer to produce an all-electric truck in series. From now on we can address the growing demand for locally emission free delivery trucks in Mega-Cities. We already received the first customer orders and will mark the global launch of this truck in one of the most iconic Mega-Cities, in New York, this September. Our Portuguese plant does not only produce the trucks for Europe and the US, we also benefit from a close cooperation with the authorities in Portugal and Lisbon testing the trucks there since 2014.”

In May, MFTBC already announced its first commercial customer in the Japanese market: Seven-Eleven Co., Ltd. will be operating 25 units of the new eCanter in their fleet within this year.

After unveiling the first charging station for trucks in May and starting production at the Kawasaki plant in Japan on July 7th, the event in Portugal symbolizes the beginning of manufacturing of the eCanter outside of Japan. With these milestones MFTBC begins paving the way for the company’s first 100 percent electric commercial vehicle. After entering small scale series production, it will just be the natural next step to start with large scale series production in the future. The experiences from this small series in customer hands will also help FUSO for the large scale production in the coming year.

The FUSO eCanter is produced in line with the conventional Canter light-duty truck at the Tramagal plant. Only the electric-powertrain specific components will be installed in specific boxes along the production line. The vehicles coming from Tramagal, Portugal will be handed over to customers within Europe and the US within the next month.

The all-electric light-duty truck is FUSO’s answer to the public’s need for a zero-emission and zero-noise truck for inner-city distribution. It helps to solve the increasing noise and pollution problems in urban environments across the globe. In addition to being an environmentally-friendly vehicle, it is also cost‑efficient and economical for users. The eCanter has a range of 100 kilometres and a load capacity of two to three tons – depending on body and usage. The vehicle’s electric powertrain contains six high voltage lithium ion battery packs with 420 V and 13.8 kWh each.

The battery packs are being delivered from the 100 percent Daimler subsidiary Accumotive in Kamenz, Germany.

The FUSO eCanter benefits from extensive experience of customer trials conducted in Portugal and Germany with the pre-series between 2014 and 2017. In comparison to a conventional diesel truck, it offers savings of up to 1,000 Euro per 10,000 kilometres on operating costs.

FUSO has a long history in alternative drivetrains for trucks. Series production of the Canter Eco Hybrid began in 2006, while the second generation has been in production since 2012.

At the 2010 IAA FUSO already presented a first prototype of an electrically powered Canter E-Cell, leading into a pre-series production for testing purposes in 2014. An outlook on the FUSO eCanter small series celebrated its world premiere at the IAA in 2016 and the commercialized series-production eCanter will be globally launched in New York in September of this year.

Tramagal – a plant with a wealth of experience

The Tramagal plant in Portugal, around 150 kilometres north-east of Lisbon, has a long and varied history. It was founded in 1964 as a joint venture of the Portuguese family-run business Duarte Ferreira and the former French truck manufacturer Berliet. In 1980, the plant began with CKD (completely knocked down) assembly for Mitsubishi FUSO. In the following years the company assembled the FUSO Canter light‑duty truck and other Mitsubishi FUSO vehicles for the Portuguese market. Ten years later, the plant was purchased by Mitsubishi Motors Portugal. In 1996, Mitsubishi Motors Corporation took over the plant as the central production location for the FUSO Canter for Western Europe. The plant became part of Daimler AG in 2003 after the automaker acquired the majority share of Mitsubishi FUSO.

The plant covers a surface of 160,000 square metres. More than 400 employees produce FUSO Canter for around 30 European countries, Israel, Morocco and Turkey. Almost 95 percent of the vehicles are exported. Since 2012, the Tramagal employees also produce the FUSO Canter Eco Hybrid, the hybrid version of the Canter.