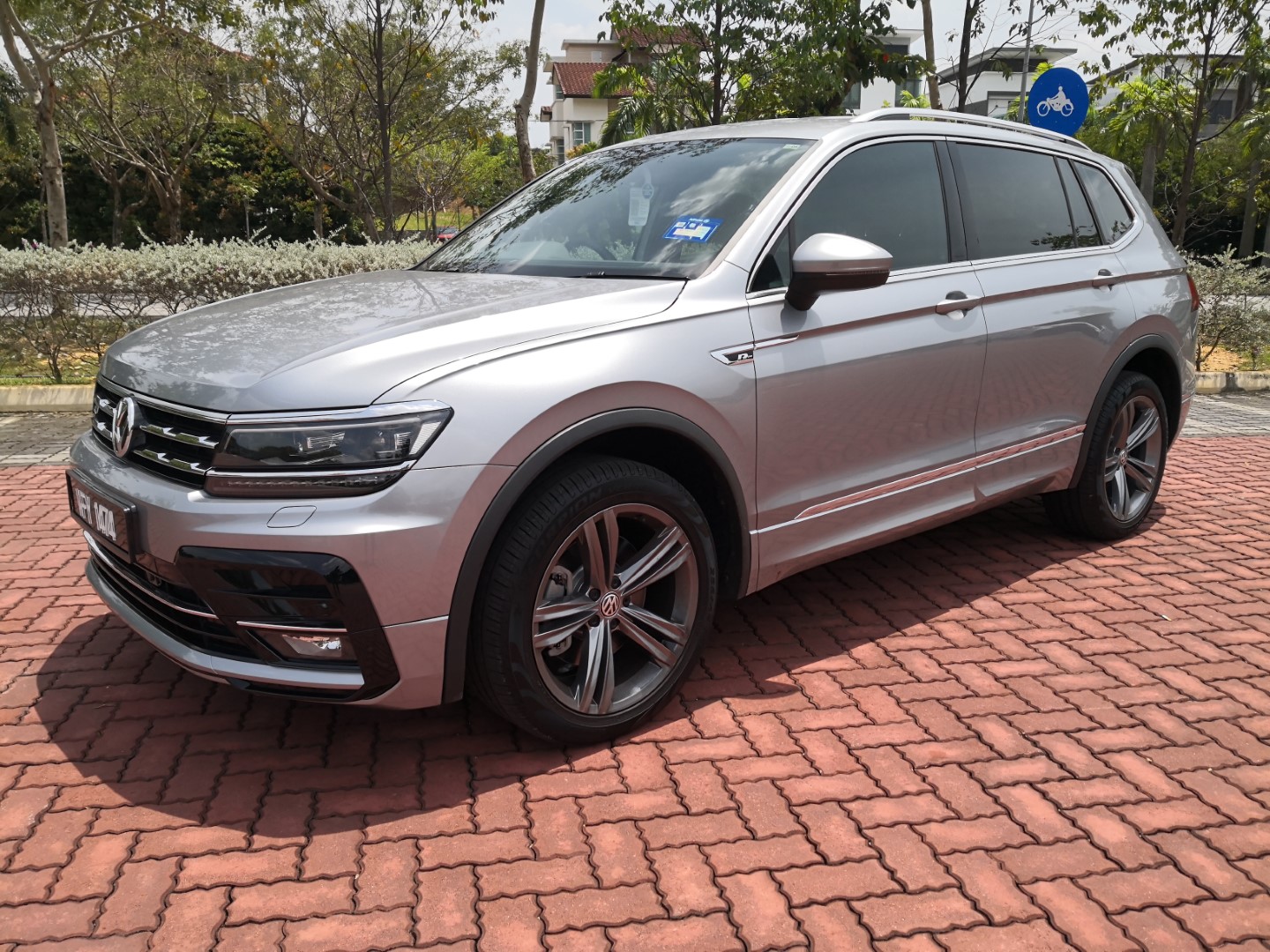 In an effort to cater towards the high demand for vehicles with seven seats in Malaysia due to the average size of our families, Volkswagen Passenger Cars Malaysia (VPCM) unveiled the seven-seater Tiguan called the Tiguan Allspace last year. Priced at RM209,575, the Tiguan Allspace has been updated for 2021 and here’s what we feel…

Two variants were introduced during the launch – the RM165,000 Tiguan Allspace 1.4 TSI Highline, and the version we’re looking at here – the rather interesting Tiguan Allspace 2.0 TSI R-Line 4Motion which we had the opportunity to sample recently.

For 2021, the Tiguan Allspace R-Line has been upgraded with:

Why interesting? Well, as much as it is a family-oriented vehicle that was made with practicality and convenience in mind, it is one of the most powerful models in VPCM’s product portfolio, so don’t be fooled by its unassuming looks. What we have here is a wolf in sheep’s clothes.

Measuring 4,701 mm in length, the Tiguan Allspace is 215 mm longer than the regular 5-seater Tiguan. The former’s 2,787 mm wheelbase is also 106 mm longer than its shorter sibling. Despite the difference in size, it is impossible to notice the difference, thanks to VW’s clever designers who raised the bonnet to make it look proportionate.

Featuring sporty front and rear R-Line bumpers, 19-inch wheels, dual exhaust tips, a rear spoiler, as well as full LED lights with LED DRLs and what not, the Tiguan Allspace R-Line is actually quite a handsome SUV that would not only appeal to our moms, but also to us. When seen from certain angles, it even looks like its bigger brother, the Touareg.

Going against models like the Mazda CX-8, Hyundai Santa Fe, and the Kia Sorento, it would not be an exaggeration to say that the Volkwagen Tiguan Allspace R-Line here is one of the best looking models in its class alongside the Mazda.

Once you get into the Tiguan Allspace R-Line, you would notice that the cabin, namely the dashboard, the seats, and the centre console looks almost identical to other models like the Passat and the Arteon.

Taking centre stage is the 9.2-inch Discover Pro infotainment system which has been updated for 2021 with the latest version of the navigation map with 3D view, the App Connect system that supports Apple CarPlay, Android Auto, and Mirrorlink. The system also comes with voice command and gesture control functions.

Another update for 2021 is that the mobile charging ports are all USB type-C now, replacing the outgoing regular USB ports. On top of the above, there is an eight speaker audio system.

Since it is an R-Line variant, the front seats are designed to be more on the firmer side, with “R” emblems embossed on the backrest. While there is more than enough head and leg room for adults in front and in the second row, the third row is more suitable for children and small-sized individuals.

Overall, the cabin is a pleasant place to be but engine and road noise can still be heard during acceleration and enthusiastic driving. The level of refinement was not as good as the Passat or the Arteon, but then again, we’re just nit-picking here.

In case you’re wondering how much boot space you get, there’s 700-litres at your service with the third row seats folded down. With the seats up, there is 230-litres.

Powering the Tiguan Allspace R-Line here is a 2.0-litre turbocharged TSI engine that sends power to all four wheels via a seven-speed wet DSG and the 4Motion all-wheel drive system which is offered as standard in this model.

The powertrain package actually delivers an impressive 220 PS and 350 Nm of torque, which is actually 30 PS and 30 Nm more than Volkswagen’s flagship Arteon itself.

Capable of sprinting from zero to 100 km/h in 6.8 seconds, the Tiguan Allspace R-Line is here is one impressively quick SUV. What make things more interesting are the 4Motion AWD system and the 19-inch Pirelli tyres that make sure that there is always grip, making all that power more usable.

Further complemented by a well-sorted chassis with little to no body roll and the flat-bottom sporty steering wheel, you tend to forget that you’re in an SUV sometimes. It is so quick and sharp that it feels like you’re in a Golf GTI on stilts.

Despite the sportiness, comfort was not compromised as bumps, lumps, and potholes were tolerated well by the suspension, which makes the Tiguan Allspace a very well-rounded product.

At the same time, the power delivery is also very progressive and composed. So, despite having a lot muscle hiding under the hood, it doesn’t scare you when you press the accelerator pedal, making the Tiguan Allspace safe enough to be driven even by your grandmother if she wants to make a run to Mydin. Unless you floor it, it feels just like any other SUV out there.

One area in which we feel the Tiguan Allspace R-Line can be better is in terms of driver assistance features.

While all the basic stuff like front and rear park distance control, rear view camera, cruise control, Multi-collision Brake Control, and Hill-Descent Control are all there, the Tiguan lacks a couple of handy features that are found in most vehicles these days like Blind Spot Information System and Lane Keep Assist.

While we have many 7-seater SUVs in the market, most of them are either Japanese or Korean. Those who strictly want a European or a German SUV with 7 seats only have huge flagship models to look at – like the Volvo XC90, BMW X7, Audi Q7 to name a few – and these things are bloody expensive.

But not anymore, as there are two German 7-seater SUVs in the Malaysian market at the moment – the Mercedes-Benz GLB (priced from RM269,118) as well as the Volkswagen Tiguan Allspace here which is also the cheaper out of the two.

Therefore what we have here is arguably the most affordable new German mid-sized 7-seater SUV in Malaysia. So, if you’re one of those who are in the market looking for a seven-seater SUV that is strictly German for about RM200,000, look no further as the Tiguan Allspace R-Line might tickle you in the right places.