Tata Motors’ in-house personalization studio has showcased a bad ass Safari Storme. Christened as Safari Storme Tuff, the personalized vehicle has been given a thorough makeover to tackle worst of the roads, as well as to tickle the fancy of off-road enthusiasts.

Exterior highlights of the Tata Safari Storme Tuff are metal bumpers, a winch upfront, roof mounted LED bar, matte finish alloy wheels with Maxxis off-road tyres and all weather tent on the roof. Adding more to its rugged character is tailgate-mounted spare wheel which once was something the Safari was known for but sadly not now. Ground clearance of the Storme Tuff has also been increased. 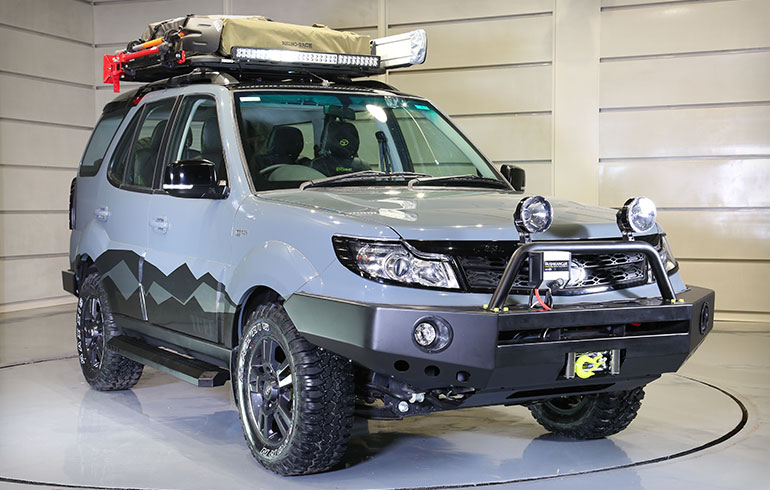 Inside the cabin, the Tata Safari Storme Tuff features an infotainment system, a head-up display and TPMS (Tyre pressure monitoring system). It does also have water resistant seat covers  in order to save your time from cleaning interior after a comprehensive off-roading session.

Tata haven’t revealed whether the Strorme Tuff has upgraded engine but since it’s a show vehicle we can consider the regular 2.2-liter VARICOR 400 diesel engine, capable of producing 156 PS and 400 Nm between 1700 and 2700 rpm, is under its hood. On the current model, it comes mated to a 6-speed manual transmission and offers the choice of all-wheel drive system.