PLUS, the highway authority just gave away RM10k worth of Safety Cones to Haulage Associations

Why did PLUS donate 300 safety cones worth RM10,000 to three of Malaysia’s largest heavy vehicle associations? This is what we want answered when it is common knowledge that the haulage industry members have got no financial issues at all and they are all reaping good profits.

The three associates that benefited from this RM10,000 gift was the:

These safety cones will be distributed to their respective lorry drivers.

What about smaller truck owners or individual self employed truckers who drive ageing trucks that are more prone to breakdowns?

Association truckers are mostly driving new shiny trucks with high visibility and it is the smaller self employed truckers that need to be visible on the highway shoulder. They need these safety cones, not the already successful logistic association tycoons. 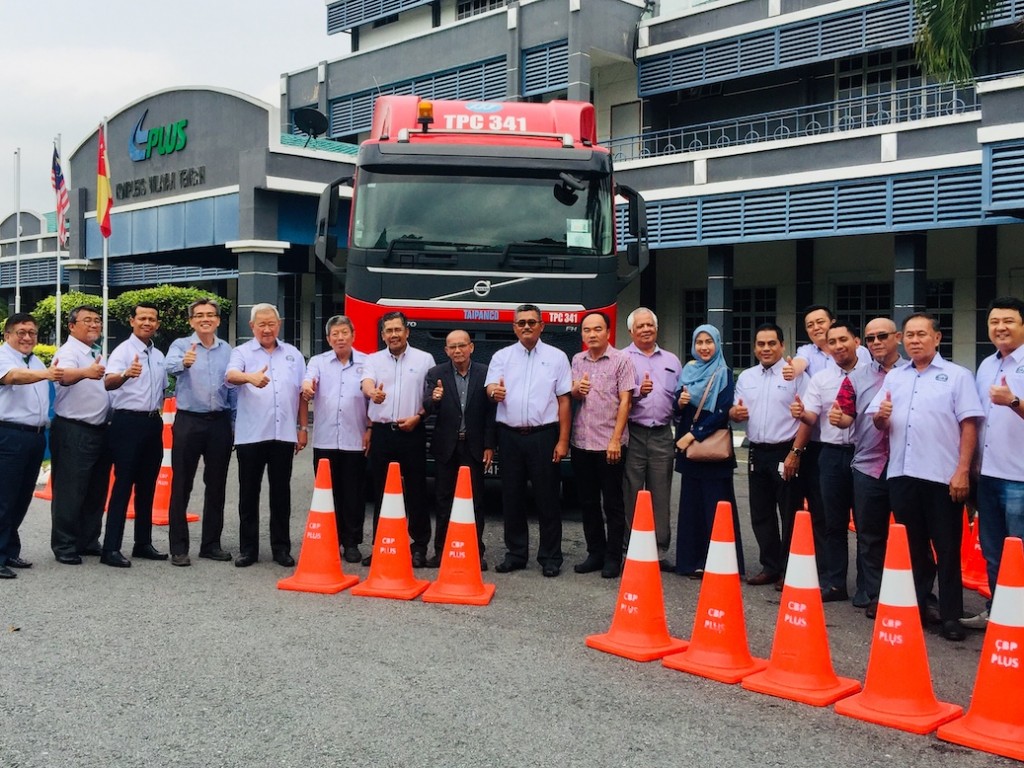 PLUS then turned this into a media exercise to get maximum exposure of their RM10,000 gift by having a hand over ceremony where Zakaria Ahmad Zabidi, Chief Operating Officer of PLUS handed the bright red and white safety cones to Dato’ Nazari Hj Akhbar, President of AMH, Ng Yoon Kin, Secretary General of Selangor and Kuala Lumpur Trucking Association and Tan Boon Hing, Chairman of the Association of Tipper Lorry Owners (Selangor and Kuala Lumpur).

Press Release: “This is part of our effort to help reduce the number of accidents due to stalled lorries on the highways. In fact, safety cones are crucial to alert other users and prevent accidents in an event of a vehicle breakdown on the highway,” said Zakaria, “and must be installed at a safe distance behind a stalled vehicle to allow ample space and time for highway users, especially motorcyclists to safely maneuver their vehicles.”

Transport Department (RTD) to improve safety on our highway. Today, we extended our

collaboration with heavy vehicle operators to meet the same objective. It is our commitment in taking care of our customers, every steps of their way,” he added.

According to Dato’ Nazari, President of AMH that this the first time an organisation has generously donated safety cones to lorries as they are mandatory safety items that every heavy vehicle must have. 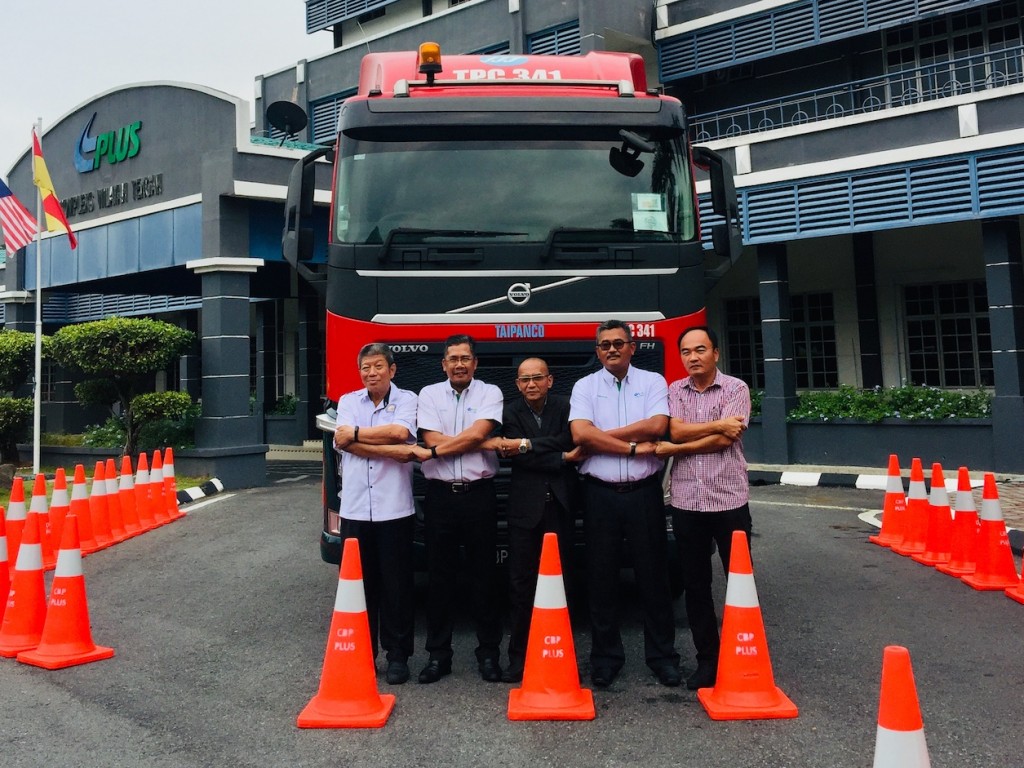 So, if every heavy vehicle MUST HAVE safety cones, why is not mandatory for the haulage/logistic owner to provide for them?

If you’re travelling along the PLUS highway (North-South Expressway) this weekend, beware! There’s going to be a planned road closure due to Le Tour De Langkawi (LTDL). Between 2pm and 4pm, the Simpang Ampat interchange at KM217 will be closed. Do plan your trip properly, and leave early on Sunday or much later if it can’t be helped.

If you find yourself unable to avoid the highway at this time, those Southbound are advised to exit the highway at Pedas Linggi and use the back roads to get to Alor Gajah or Tampin.

Those Northbound from Johor Bahru should exit at the Ayer Keroh toll plaza. Use your Waze or Google Maps app or follow @PLUStrafik on twitter for the most accurate information.

Here’s some information about LTDL:

About the Le Tour De Langkawi:

Le Tour de Langkawi (LTdL), Asia’s premier multiple-stage race, is the brain child of Malaysia’s Prime Minister, Tun Dr Mahathir Mohamed which made its debut in 1996 to place Malaysia on the world sporting and tourism map.

Le Tour de Langkawi (LTdL), Asia’s premier multiple-stage race, is the brain child of Malaysia’s Prime Minister, Tun Dr Mahathir Mohamed which made its debut in 1996 to place Malaysia on the world sporting and tourism map. It was named after the jewel island of Langkawi, a UNESCO  World Geopark status island located off the western coast of Peninsular Malaysia. Back then, the race started off with a modest UCI-status of 2.6. LTdL has since evolved to become Malaysia’s biggest cycling competition and steadily raised its status to become Asia’s biggest race which has been upgraded to its current 2.0Hors Class, recognised and sanctioned by the UCI and UCI Asia Tour. LTdL is also considered as one of the world’s exciting races outside of Europe, attracting top teams from the World Tour, Pro Continental as well as Continental and national teams from Europe, North America, South America and Asia.  Over the years, Le Tour de Langkawi has sparked off great interests and received recognition from top European teams and riders. Known as a sporting spectacle which combines both sprinting and climbing elements, LTdL has produced names who have went on to make waves in the international cycling scenes including the Grand Tours. They include former world champion like Italians Paolo Bettini and Ivan Quaranta, American Chris Horner, Tom Danielsen, Stuart O’Grady, Graeme Brown, Robert Hunter, Anthony Charteau and many more. Sprinters like Andrea Guardini has also earned great reputation as the race’s most accomplished sprinter with record victories in Malaysia.  Asian riders like Wong Kam-Po, Anuar Manan, Ng Yong Li, Hariff Salleh, Fauzan Ahmad Lufti and Loh Sea Keong were among the notable Asian riders who managed to create impact in the Tour.

This year, we promise to stage an even more exciting race for both riders and spectators alike with the entourage heading back to Langkawi for the penultimate and final stage. Genting Highlands, the most challenging climb dubbed as the Tour’s queen stage, is back on the route map after a lapse of four years. The 1,240km 8-stage journey will take riders and the entourage across scenic spots along the west coast of Peninsular Malaysia including big cities, small kampungs and historical towns like Taiping, Muar, Melaka, Georgetown and of course, the legendary island itself.

A total of 132 riders from 22 Teams from Europe, Asia Pacific, East and Southeast Asia, North America and South Africa are set to battle it out this year in the 8-day race to be held from 6 to 13th April 2019.

PLUS Malaysia Berhad (PLUS) expresses its regret over the massive traffic congestion on the North-South Expressway (NSE), between Kuala Kangsar and the Terowong Menora (Menora Tunnel), on Sunday, 24 March. Customers along the expressway endured a massive crawl after two trailers collided and burst into flames at KM259.2 (Southbound).

Upon being notified of the incident, PLUS was first on site and immediately informed the Fire & Rescue Department, Royal Malaysian Police (PDRM) and other agencies; as part of its standard procedure including traffic updates on PLUSTrafik Twitter and traffic messages boards along the highway. PLUS also activated the temporary U-turn and exits to allow customers alternative routes. By the time the authorities arrived at the place of accident, a mitigation and clean-up effort was launched.  Despite facing challenges like bad weather, oil spillage and the high weekend traffic volume, PLUS is grateful for the work and commitment demonstrated by the Fire & Rescue Department to put out the fire, PDRM and other agencies for their support on traffic management. 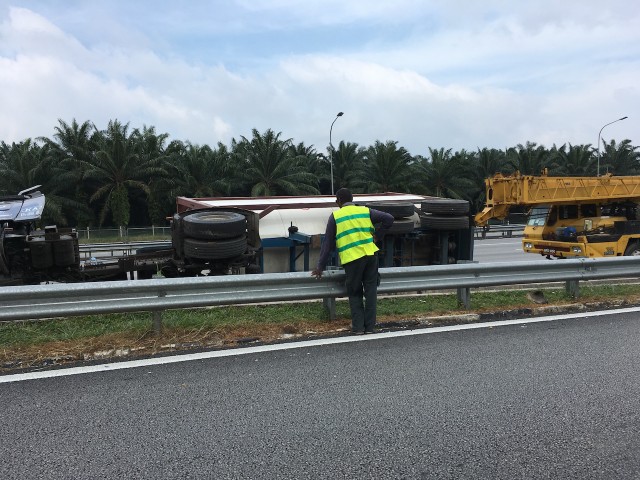 Safety is at the heart of PLUS. Taking lessons from past incidents, PLUS has committed our best efforts to manage the incident and will continuously improve its operational procedures including a closer collaboration with the relevant authorities and agencies to improve the response time. The company is very keen to discuss with transporters and logistics companies on other collaborative efforts to help reduce incidents involving heavy vehicles. PLUS also encourages all drivers to apply defensive driving tips and invite them to take a break when needed, especially during long drives. PLUS has a toll-free number PLUSLine at 1-800-88-0000 for customers, should they need any assistance on PLUS highways or download the PLUS Mobile app which has an SOS feature.