Isuzu is best known for building some of the most reliable and efficient diesel engines in the world and now comes an all-electric medium-duty truck. The popular Elf truck removes its turbodiesel engine for a battery pack and a set of electric motors for clean emissions logistics.

Isuzu had the electric powered Elf, as well as the upgraded Giga at the 2019 Tokyo Motor Show.

Isuzu also tested their electric drive Elf in America with the Class 4 NPR-HD, which has a gross vehicle weight rating of 14,500 lbs.

Today, the 20th of September, inspired by a Swedish school girl, Greta Thunberg, young people around the world will be on ‘climate-striking’ walking out of school for a few hours to demand action against the global warming that darkens their future.

Even companies Like Scania Truck and Bus are taking part in this strike globally to show their support for the movement. Starting from 11 am (today) until 12 pm on 20 September 2019, employees at all twelve of Scania Malaysia branches nationwide as well as the Regional Product Centre in Port Klang, Scania employees in Scania Singapore and Asia Product Centre in Singapore will stop work and attend a Scania Climate Day training on sustainability at their respective premises.

Is Scania the only auto company taking a strong stand against climate change? No other car , truck or bus brand seems to be taking a stand like this around the globe.

Discussions, quiz session, reflection sessions, conference calls across the branches and the next steps will be part of the activities during the training. Scania Malaysia is also inviting its fans, and members of the media to attend the Scania Climate Day training. 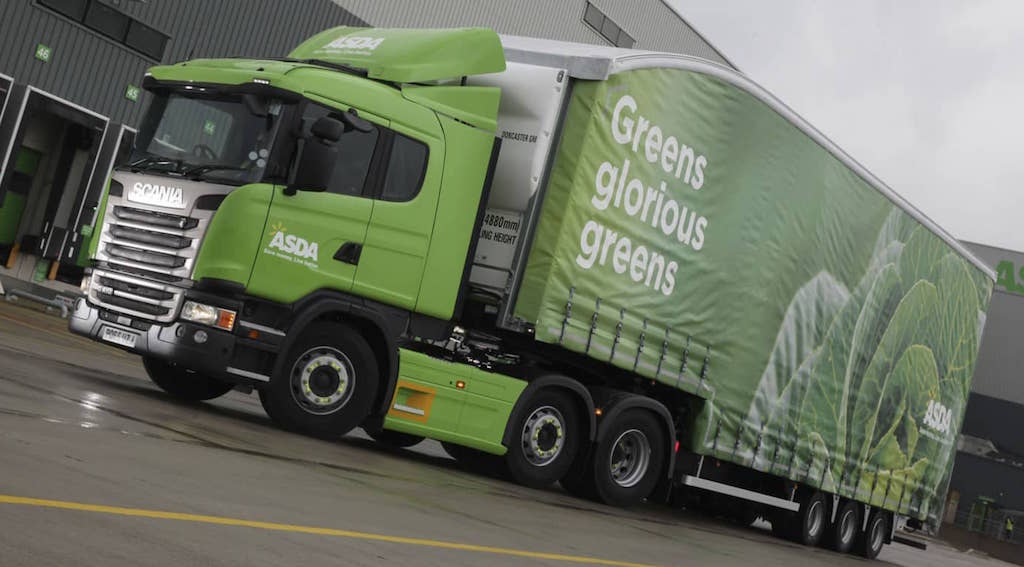 You can find out what’s happening in your community at globalclimatestrike.net.

Mack Trucks showed the LR BEV battery-electric refuse truck at the WasteExpo 2019 in Las Vegas. The truck has a built-in electrical powertrain consisted of two 130 kW electric motors, which together produce 496 hp (continuous power 349 hp) and 5500 Nm of torque from zero rpms. It is also equipped with a two-speed Mack Powershift gearbox. Energy comes from four NMC lithium-ion batteries.

Based on the LR truck that is already popular with municipalities all over the country; only it has a fairly wild battery-electric drivetrain under it that makes a respectable 496 horsepower and a mind-boggling 4,051 pound-feet of torque. It does this with two 130-kilowatt AC motors, a two-speed transmission and some beefy Mack 56,000-pound axles.

The diesel engine on an ordinary trash truck doesn’t just make the wheels spin; it also has to run a ton of hydraulics and other systems. The LR BEV uses battery power to drive these systems, including hydraulics. The whole system is powered by four large lithium nickel manganese cobalt oxide batteries that can be recharged at up to 150 kW and 200 amps. 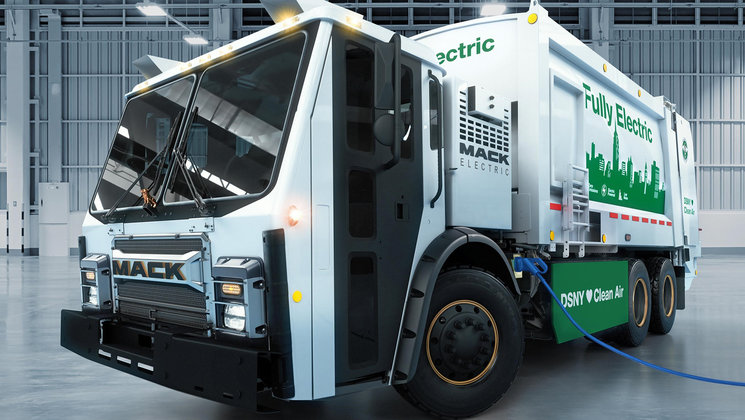 Mack left out the specifics on the LR BEV’s expected range, but it’s fair to assume that most garbage trucks don’t pile the miles on in the same way that a semi truck would. Also, the hundreds of stops and starts that a truck might see during a shift gives plenty of opportunity for brake regen, which should help range too.

What Is The Range?

With its seamless, clean design and colour highlights typical of the brand, the Mercedes-Benz EQC is a pioneer for an avant-garde electric look while representing the design idiom of Progressive Luxury. In combination with the extensive services and a range of 445 – 471 km (NEDC), it makes electric mobility convenient and suitable for everyday use. The charismatic EQC impresses with the sum of its attributes.

With its effortlessly superior driving impression, high level of acoustic comfort and exciting driving dynamics, the EQC displays all the brand’s hallmark attributes – the Mercedes of electric vehicles. 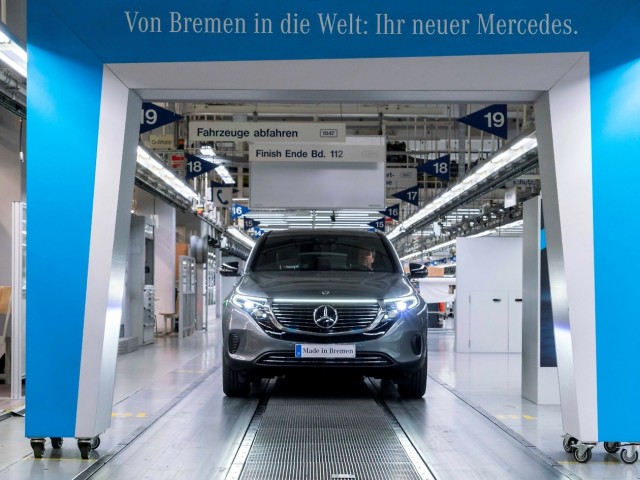 Prices for the Mercedes-Benz EQC start at €71,281 (including VAT and local European delivery costs) for the already generously equipped base version. Its net basic price of less than €60,000 (for export before delivery and taxes) makes it eligible for an environmental bonus in Germany – regardless of individual equipment.

The first EQC has just rolled off the production line at the Mercedes-Benz plant in Bremen. There it is being produced on the same line as the C-Class Saloon and Estate as well as the GLC and GLC Coupé – digitally, flexibly and sustainably. Production of vehicles with various drive systems can be adapted variably and efficiently in line with market demand. This approach is an ideal way to ensure the best possible use of capacity at the plant, and guarantee high Mercedes-Benz production and quality standards. 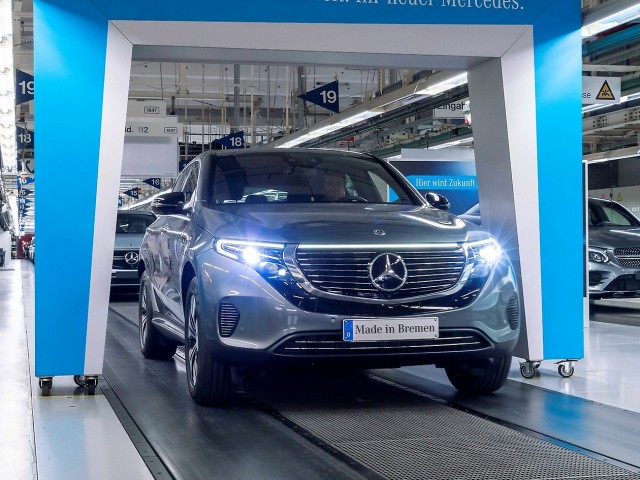 Digital solutions such as sophisticated mobile devices, driverless transport systems and the ‘paperless factory’ assist the assembly team. Production staff are irreplaceable, even in the age of electric mobility. The use of Big Data and artificial intelligence assists with predictive maintenance, for example. This means the fact that the company made investments in maximum flexibility and hi-tech equipment offering trend-setting Industry 4.0 solutions at an early stage is paying off. 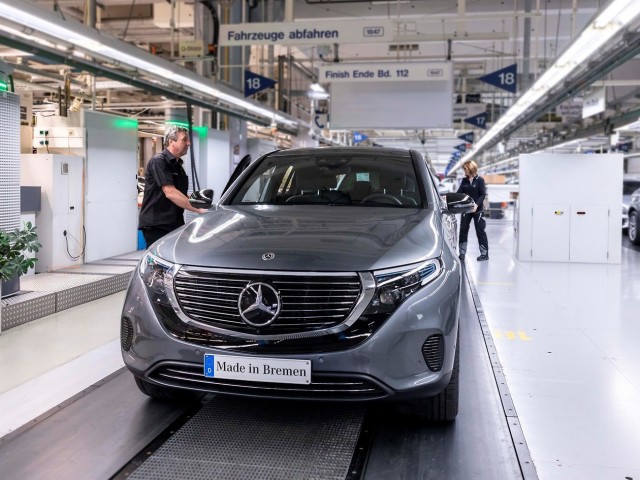 When the body, suspension and powertrain come together in automobile assembly, this is referred to as the “marriage” – in the case of the EQC this is when the two powerpacks are installed in the body. One major innovation is the so-called battery joining centre. The second “marriage” takes place here: This is where the EQCs are recognised as electric models with the help of data tags attached to the body, and equipped with a battery. The body is suspended from a carrier and deposited on a frame. Support arms raise the battery to the vehicle’s floor from below. An employee monitors the automatic bolting in place.

The batteries for EQC production in Bremen are produced by wholly owned Daimler subsidiary Accumotive at its site in Kamenz (near Dresden) and delivered partly charged. These batteries are kept near the production line and then delivered to the line flexibly on demand using driverless transport systems. Local battery production is a major success factor in the electric initiative of Mercedes-Benz Cars. The production network for the mobility of the future is well positioned.