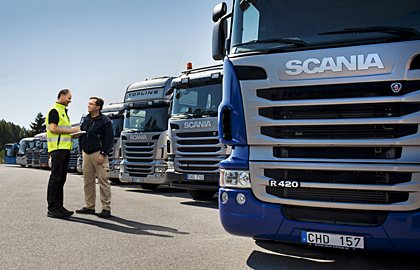 In December Scania supplied its 100,000th truck with activated connectivity, which means that the owner as well as Scania’s workshops receive regular updates on the trucks’ performance.

This feature is included as standard in many European markets and in a number of major markets in Asia and Africa. The 100,000th vehicle since it all started in 2011 was delivered to Emil Eggers AG, a haulier that has long been drawing the full benefit of these services.

All Scania customers in the markets in question are able to connect their vehicles to their own offices and to Scania’s workshops, through a basic package that is free of charge. Remote Diagnostics and Driver Coaching are by far the most-used services. When customers request it, Scania’s workshops can access and read a truck’s status with regard to a number of parameters that are important for uptme and operational economy. This allows the haulier company to improve both its utilisation rate and its financial situation. In addition to the basic package, Scania offers a number of services that are wholly or partly based on connectivity. For example, positioning information with frequent updates can be displayed on the haulier’s computers; another example is automatic management of tachographic data. “We have excellent experience of the opportunities offered by Scania via connectivity,” says Michael Egger, Emil Egger AG. “They are a valuable addition to our haulage operation’s other support systems and actively contribute to increased uptime and reduced operating costs. Connected vehicles are more efficient. With operations all over Switzerland with a considerable amount of long haulage, it would be inconceivable for us to ignore these opportunities.”