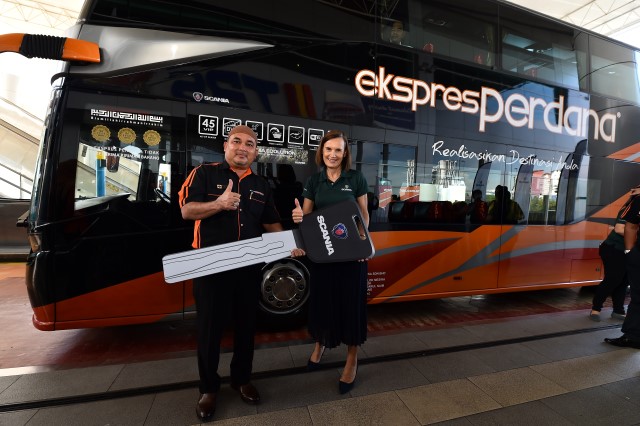 Perdana Group, operator of Perdana Express, Darul Iman Express and Lienadia Express has just signed a Maintenance, Repair & Maintenance Contract and Ecolution partnership with Scania Malaysia for 78 of its buses as part of their efforts in providing passengers with a safer, more comfortable, and greener journey.

“At Perdana Group, we believe in safety and comfort for our passengers. The contracts we signed today are a validation of the high quality service by Scania’s skilled workshop personnel in ensuring that our customers have peace of mind during their travels,” commented Tuan Haji Laili.

Perdana Group also signed up as a Scania Ecolution partner as part of the Group’s sustainability efforts to reduce their CO2 emissions. The Group will have Ecolution for its entire fleet starting with 22 buses as pilot and expanding from there. Scania Ecolution partnership focuses on reducing fuel consumption and operating cost, which translate to improved profitability while fulfilling the growing demand for environmentally-friendly initiatives.

Perdana Express, a major bus express company in Malaysia that was established back in 2009, offers bus services to destinations across Peninsular Malaysia covering the East coastal states of Kelantan, Terengganu and Pahang; the Northern states of Kedah, Penang and Perlis; the central region of Selangor, Wilayah Persekutuan, Negeri Sembilan and Melaka and the Southern region, namely Johor. The company currently owns over 100 Scania buses in their fleet and has been a Scania customer since 2010.

In conjunction with the contract signing, Perdana Express also received new Scania buses to strengthen its connection between the East Coast to the Central Region of Peninsular Malaysia as well as expansion to the Northern Region in particular Tanjung Malim and Parit Buntar.

“Investing in more Scania buses is a testimony of our trust and faith in the performance and reliability that Scania has given us for more than a decade when we started this business.,” added Tuan Haji Laili.

Perdana Express invested in Scania’s K410EB6X2 buses that are equipped with Scania Opticruise, full air suspension, electronic braking system (EBS), Scania Retarder, and traction control, a higher torque at lower revs engine, and fully adjustable steering wheel and hanging pedals. These features ultimately result in a bus that is safe, comfortable and fuel-efficient for both passengers and drivers during long distance travel while minimising impact to the environment.

“Today’s signing and handover ceremony is a testament of Scania’s on-going drive towards sustainability with our far-reaching 2050 commitment in reducing the carbon footprint to net zero. By providing our customers with sustainable transport solutions, we can achieve mutually beneficial results of profitability for their business and reducing the environmental effects of our operations,” commented Marie.