Review: Volkswagen Arteon 2.0 TSI R-Line – You Win Some, Lose Some 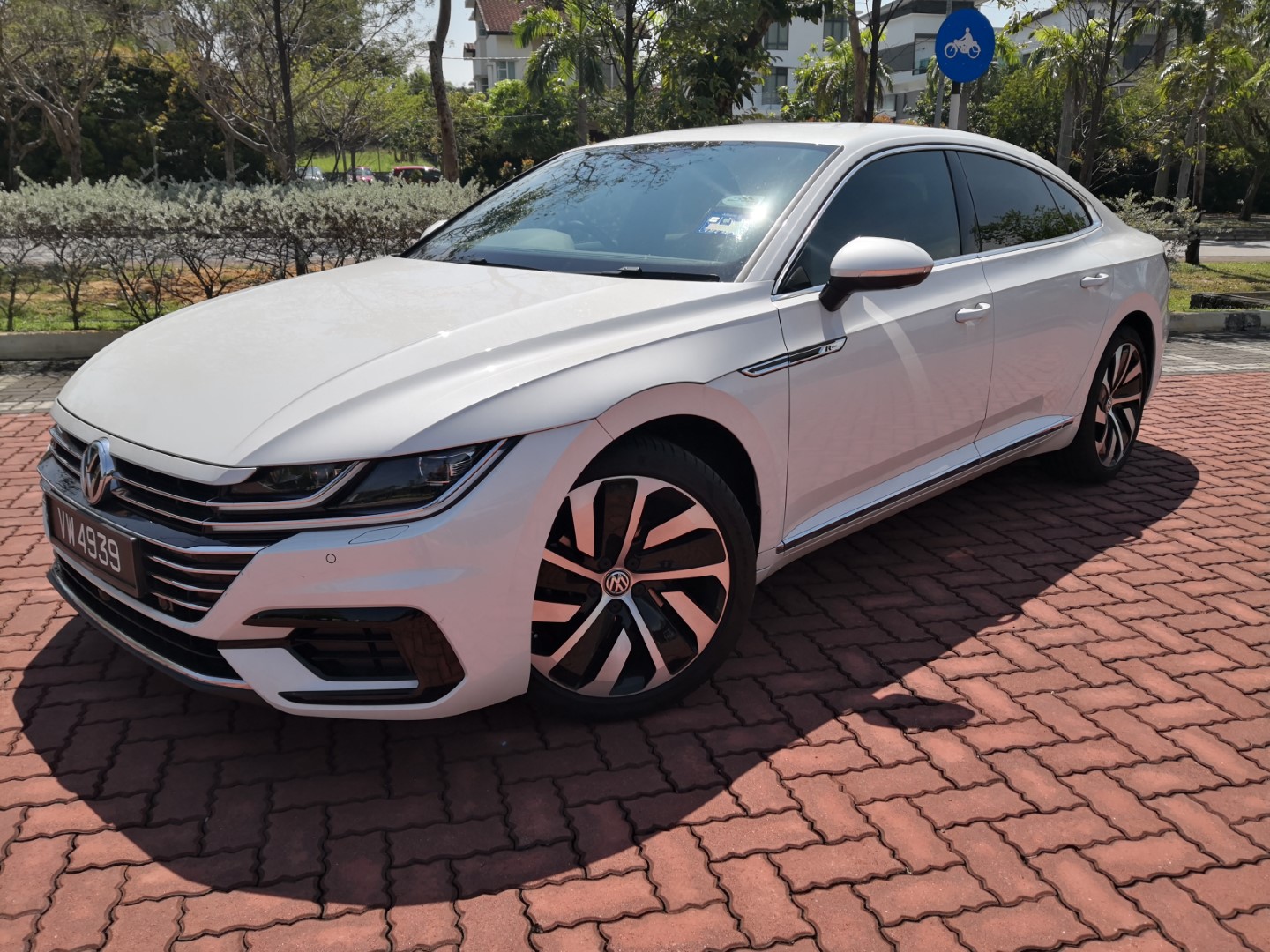 Let’s face it – SUVs have taken over the world. Now that we have models ranging from as low as RM59,000 all the way to your Bentley Bentaygas and Rolls-Royce Cullinans, eight out of 10 houses in Malaysia have an SUV parked in them.

In case you’re wondering why, SUVs simply offer more space, practicality, and convenience than similarly priced sedans. So if you look at things from a value-for-money point of view, SUVs are just more worth it.

However, there is one area in which sedans still reign supreme – as a symbol of status. When it comes to making a statement just by arriving, no SUV can come close to what a luxury sedan can do. This is why cars like the Rolls-Royce Phantom, the Bentley Flying Spur, and the Mercedes-Benz S-Class are preferred choices of the rich and powerful.

But what if you don’t have Mercedes-Benz or BMW sedan money? What if your budget is slightly more than RM200,000 and you want to make a statement when you arrive somewhere and look cooler than owners of the Toyota Camry, Honda Accord or the Mazda6?

Say hello to the Volkswagen Arteon – the brand’s latest flagship sedan in Malaysia which is here to succeed the CC. Although we’re calling it a sedan, the Arteon is actually a five-door coupe with a boot that opens like a hatchback instead of a typical sedan’s.

Priced at RM221,065 on the road without insurance, the Arteon is available only in one trim level in Malaysia – Arteon 2.0 TSI R-Line – which is being assembled in Pekan, Pahang.

Powering the car is the Passat’s 2.0 litre TSI turbocharged four-cylinder petrol engine, producing 190 PS from 4,180 to 6,000 rpm and 320 Nm of torque between 1,500 to 4,180 rpm. All this is sent to the front wheels via a seven-speed DSG wet dual-clutch transmission with paddle shifters.

The Arteon here, despite still being the model that made its world debut in 2017, is among the best looking cars on the road at the moment. In fact, it is arguably the best looking Volkswagen in the stable as well.

We have a huge striking chrome grille, a very sporty looking bumper, full LED lights all over, 19-inch wheels, frameless windows, a small rear spoiler, as well as twin exhausts that make the car look mighty handsome no matter from which angle you look at it.

Measuring 4,862 mm long and 1,871 mm wide, the Arteon is a huge car which actually looks quite intimidating. Coupled with the stunning design, what we have here is an absolute feast for the eyes.

So, when it comes to arriving in style and making heads turn towards you, the Arteon’s got you covered, 100%.

As funky as it is on the exterior, the Arteon’s cabin, in typical Volkswagen fashion is kept simple yet solid. The design and layout are identical with the Passat, the Tiguan, and basically most other Volkswagens in the lineup with a generous dose of black Nappa leather, a digital instrument panel, and a 9.2-inch touch-screen display taking centre stage.

Since it is an R-Line variant, we have R-Line emblems on the seats, on the scuff plates, on the steering wheel, as well as on the floor mats among other spots.

The list of standard features you get include the latest version of Volkswagen’s Discover Pro infotainment system with GPS, wireless Apple CarPlay, Android Auto, and an 11-speaker 700-watt Dynaudio sound system.

And then there are other features like keyless entry, push-start ignition, triple-zone auto climate control, cruise control, 14-way power-adjustable front seats with driver’s side memory, ambient lighting, and a 563-litre boot.

Where safety is concerned, the Arteon comes with front and rear parking sensors, a 360-degree camera, seven airbags, ABS with EBD and brake assist, stability control, a tyre pressure monitoring system, and ISOFIX child seat anchors at the rear.

Unfortunately, the car doesn’t have Autonomous Emergency Braking or even Blind Spot Monitoring which is quite a let-down. In fact, even vehicles that cost less than half as much as the Arteon have them nowadays.

As mentioned above, the Arteon here is powered by the same 2.0-litre turbocharged TSI engine as the Passat which is paired with a 7-speed wet DSG dual clutch transmission that sends 190 PS and 320 Nm of torque exclusively to the front wheels.

Whatever power the engine produced was more than enough, and was delivered with such smoothness at any given time. Thanks to the turbocharger, all 320 Nm of torque was available from as early as 1,500 rpm, which means that the Arteon is ready to go at a press of the accelerator pedal.

Throw in the sporty leather seats, the flat-bottomed steering wheel, and the 19-inch low-profile tyres into the mix, and what we have here is a very sporty car that is essentially a Golf GTI for the family man.

Despite its massive size, the Arteon is very sharp, agile and responsive car that is quite enjoyable and engaging to drive. Regardless of whether you’re in town, on the highway, or along some twisty bits, the Arteon offers great level of composure, instilling confidence in you to push it a tad harder. On top of all of the above, the level of noise, vibration, and harshness (NVH) is kept impressively low.

Its biggest strength besides its good looks has to be the amount of space it offers inside. The 2,837 mm wheelbase translates into generous amount of legroom both in front and in the rear. Further complementing the spacious cabin is the huge 563-litre boot.

Head space in the rear comes at a premium due to the low-slung roof design. Another setback is that the seats that are positioned quite low, similar to the new Honda Civic just to put things into perspective.

So, if you often travel with your old folks or someone with back issues, the Arteon may not be the ideal car for you as getting in and out of the car can be leceh.

And then we have the lack of two safety features that are pretty common nowadays – Autonomous Emergency Braking as well as Blind Spot Monitoring. Since these systems are available even in cars that cost less than RM50,000 nowadays, it is indeed surprising to see a RM221,000 car lacking them.

So, if you have no issues with the Arteon’s shortcomings, what we have here is quite a well balanced package – a car that is a more affordable yet solid alternative to its pricier German rivals like the Mercedes-Benz C-Class and the BMW 3 Series.