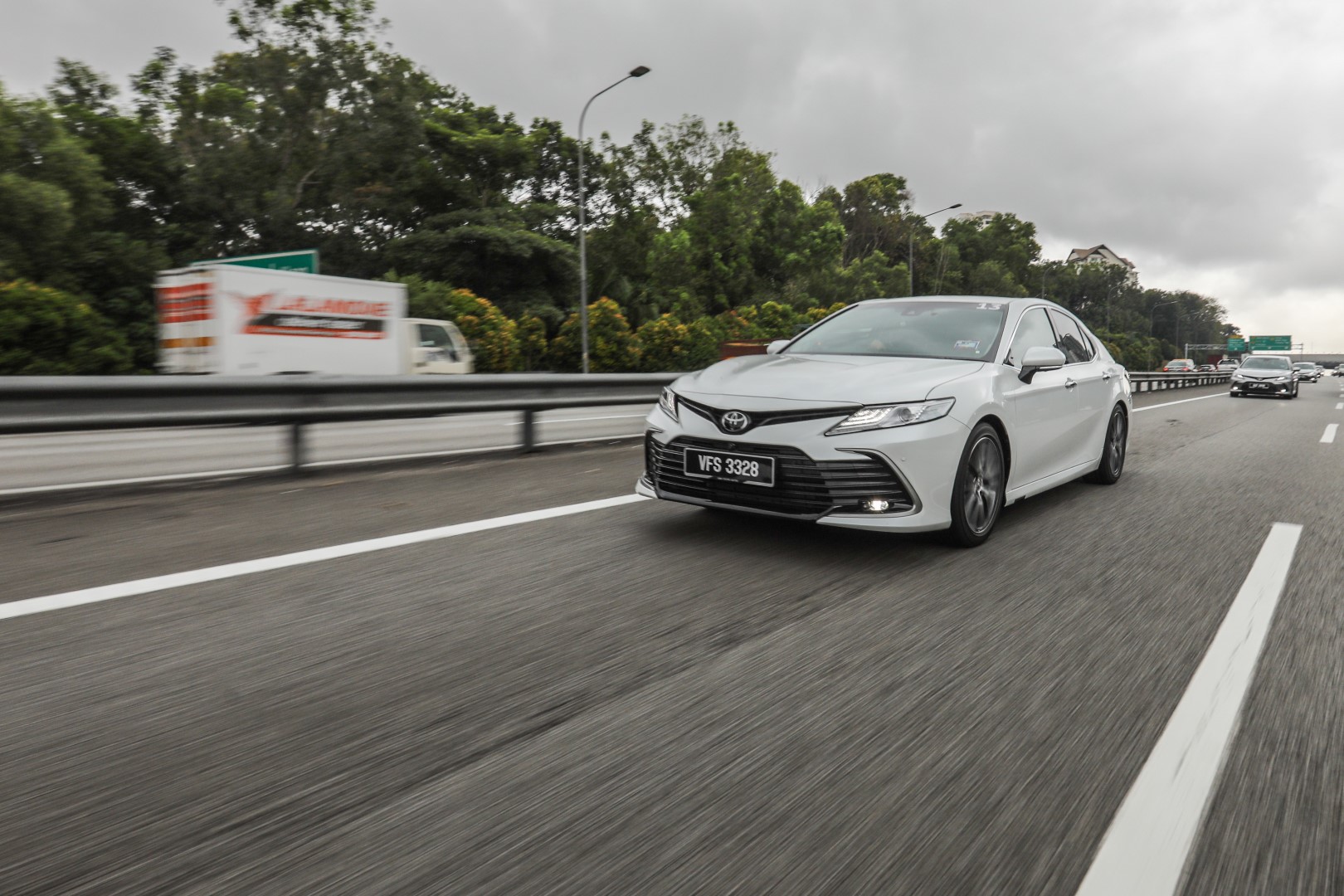 The Toyota Camry has always been known to be the ultimate “Uncle Car”, offering a great level of comfort and refinement.

As comfy as it was, the Camry was never really about being stylish or a status symbol, but that has finally changed with the latest 2022 version we’re looking at here.

So, in order to give the press a first-hand experience on the new Camry, the folks at UMW Toyota Motor Sdn Bhd invited us to spend a day with the car on a day trip from Shah Alam to Gambang, Pahang, and back.

Imported from Thailand, the 2022 Toyota Camry Facelift which will only be available in one variant now comes with redesigned bumpers, Bi-LED Projector headlights with LED Daytime Running Lights (DRL), and newly designed 18-inch Alloy Rims. For extra peace of mind, its automatic headlamps now also come with the Follow-Me-Home function.

If we are to put this Camry next to the pre-facelift model, there are only two noticeable differences which are the wheels and the front bumper design. Besides that, the car looks almost identical to the outgoing model. It is still quite handsome though.

Inside, the main highlight is the addition of a control panel within the centre armrest which is a first in the Camry’s segment. Thanks to the control panel, rear passengers can now easily recline their seats, adjust the rear tri-zone air-conditioning system and sun-shade, as well as seamlessly control the audio system with the touch of a button.

The infotainment system has also been upgraded with a new 9-inch Display Audio that comes with Apple CarPlay and Android Auto Ready capabilities, as well as nine JBL speakers including a subwoofer for the ultimate listening pleasure.

The new central display is also positioned higher above the centre air vents, closer to the driver’s line of sight for increased visibility and easy access to audio function.

Priced from RM199,109.50 (with 50% Sales & Service Tax exemption and without insurance), the new 2022 Toyota Camry is still underpinned by the same TNGA Platform as before, but the powertrain has been replaced by a new 2.5-litre naturally aspirated Dynamic Force 4-cylinder engine that produces 209 PS and 253 Nm of torque, which is a 25 PS and 18 Nm bump from before. Also new is the Direct Shift 8-speed automatic gearbox.

Upon opening the doors, we were greeted by a premium looking cabin that came with a generous dose of black leather and high quality materials. The seats offered good level of support even for big individuals.

All the buttons and controls were positioned ergonomically with the driver in mind, so we could get comfortable and become one with the car in a matter of minutes.

After driving the car for about 10 minutes, we could immediately feel the difference between the new powertrain and the outgoing unit as the car was quieter, smoother and quicker, thanks to the bump in power as well as the new 8-speed direct shift gearbox that delivers power in a much more seamless manner than the outgoing 6-speed transmission.

Making the drive even more relaxing were the new driver assistance features like the Dynamic Radar Cruise Control, Lane Tracing Assist, and Pre-Collision System that were there to take some stress off-the driver.

The Camry was a very fun car to drive along twisty bits as well. With 253 Nm of torque available on tap, complemented by the mighty impressive TNGA chassis, the new Camry tackled corners along the Karak Highway effortlessly, proving itself to be an impressive “driver’s car” unlike many of its predecessors.

As impressive as the new Camry was in the driver’s seat, the main highlight was actually the rear seat which feel almost Lexus-like now, thanks to the newly added control panel on the armrest from which we could recline the seats, control the air-cond settings, and control the powered rear sunshade.

Even when the car is being driven fast or while cornering, the Camry felt very planted with little to no body roll, translating into a composed and relaxing ride for the rear occupants.

On the downside, only two occupants can sit at the rear with the control panel down, which means that the Camry is more of a “boss” car than a family car.

Another thing which can be improved is the new 9-inch touch screen infotainment system’s interface which looks rather conservative compared to other models like the Corolla Cross or even the Hilux. Let’s just say that it doesn’t fit the image of a car that asks for RM200,000.

On top of all of the above, we have a huge boot and an impressive sound system that make the whole experience more enjoyable.

In conclusion, the Camry has evolved from a family-oriented vehicle into an executive sedan that is ideal for a boss who prefers being chauffeur-driven. In fact, it would not be an exaggeration to say that the car is even fit for ministers and royalties.