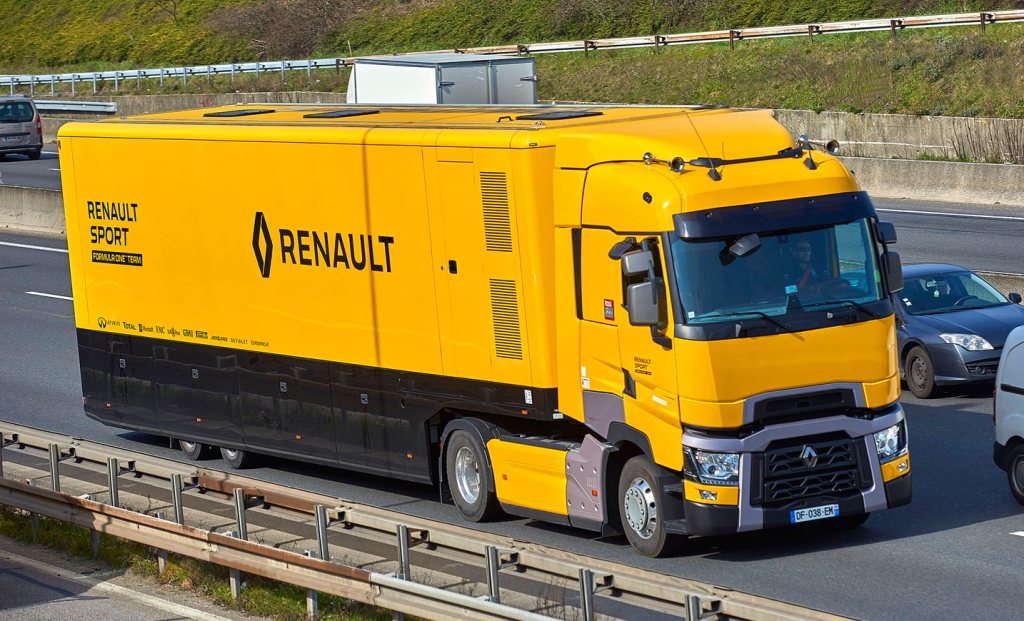 For the last fifteen years, Renault Trucks has been partnering Renault’s activities in Formula 1. For the 2016 season, Renault Trucks Range T vehicles, fitted with the Euro-6 DTI 13-litre 520hp engine and the Fuel Eco pack will be transporting the single-seaters and the various motorhomes to all the European Grand Prix locations.

Re-entering the competition in 2016, with its own Formula 1 team, Renault Sport is continuing its long-term partnership with Renault Trucks. At the European Grand Prix events, Renault Trucks Range T vehicles, voted ‘International Truck of the Year 2015’ and equipped with the Euro-6 DTI 13 litre 520hp engines, will provide the team’s logistics. The Range T520s will be carrying the single-seaters, spare parts and the various motorhomes that are essential for the smooth running of the team’s operations at a Grand Prix Formula 1 event.

Formula 1 fans will be able to see these impressive vehicles for the first time in the new golden yellow livery adopted by the Renault Sport F1 Team in Barcelona at the Spanish Grand Prix – the first stage of the European season on May 15th.

For the Renault Sport F1 Team, the choice of these Range T520 vehicles was dictated by, “The products’ quality and their innovation, and for their compliance with Euro-6 standards”, plus “Their active security has also been significantly improved and their fuel consumption has been considerably reduced when compared with the previous ‘Magnum’ generation.”

All the vehicles are 4×2 tractors fitted with the Eco-Fuel pack. This pack brings together several intelligent technologies designed to reduce fuel consumption: the inhibited power mode, eco cruise control with Optiroll controlled freewheeling, a disengageable air compressor, a variable flow steering pump and automatic engine cut-out. The Eco Fuel pack makes it possible to reduce the vehicles’ fuel consumption by up to 4%.

Finally, it should also be noted that Renault Sport’s other competition activities (Renault Sport series and Formula E) will also have logistics provided by the Renault Trucks Range T vehicles.