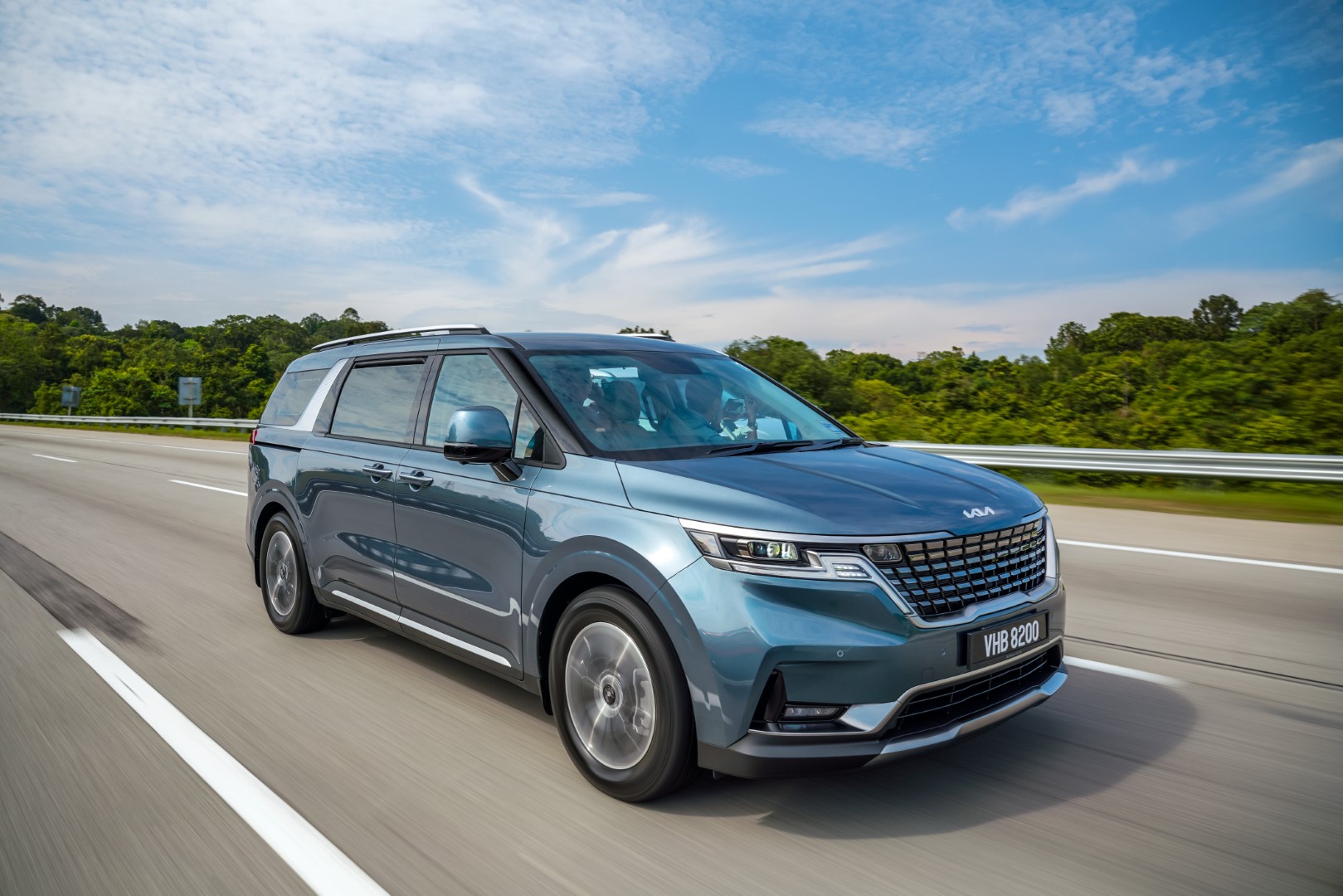 When one mentions “luxury MPV”, the first model to appear in our minds is the Toyota Alphard, but what if the Alphard or the Vellfire is too small for your family which is as big as a football team?

Although the Hyundai Starex, Staria, and the Mercedes-Benz Grand Vito are there, they look and feel very much like buses and simply lack the plushness of an Alphard or a Honda Odyssey.

Fortunately, we finally have a vehicle to fill that void now in the form of the newly launched all-new Kia Carnival, priced at RM196,340 on the road without insurance.

Imported from South Korea, the all-new Kia Carnival is an 11-seater MPV which comes in six colour options,  and a 5-Years Manufacturer Warranty + 5-Years Free Maintenance according to manufacturer’s standards inclusive of labour, parts and lubricants.

So, in order to give us a first-hand experience in the new model and to show us what it has to offer, the company gave us an opportunity to sample the all-new Kia Carnival for a few hours recently when we drove it from Glenmarie to Ipoh and back.

Despite its massive size, the all-new Kia Carnival looks quite sleek – more like an SUV and not a bus – which is a big plus point. The last thing you want is someone to jokingly go “Wah, started bus company ar bro?” every time you arrive, don’t you?

The only thing we didn’t like about the exterior were the rear signal lamps that were fitted in the rear bumper. Compared to the LED indicators in front, the rear signals look a bit cheap and out of place.

Moving into the cabin, the all-new Kia Carnival’s interior looks just as interesting as the exterior.

Unfortunately, there is only one colour available for the cabin which is what you’re looking at now. So if you don’t like this upholstery combination, you may want to look at another vehicle.

Key features include a generous dose of leatherette upholstery, paddle shifters, a “diamond” rotary gear selector like what we used to see in Jaguars, automatic windows all around, 8 USB charging ports, two 12V power outlets, second and third row sunshades,  air vents and cup holders for every row, and a dedicated control for rear air conditioning.

Both second and third row seats come with 40:20:40 split-folding configurations with a centre-walkthrough space. Meanwhile, the last row is a “bench” which can be folded flat into the floor.

On the upside, the Carnival’s cabin is very refined and well-built. All the buttons, controls, switches, and levers are made of high quality material that don’t only look good, but also feel good when you touch them.

The 11-seats in the Carnival come in a 2-3-3-3 configuration. Both the second and third row arrangement have a 40:20:40 split, where the seat in the middle on both rows can be folded to offer a central walk-through between the second and fourth row.

The fourth row on the other hand comes with bench-type seats that can be folded down to increase boot space.

Every row gets its own pair of USB chargers, cup holders, and air cond vents, which is a big advantage. The level of noise insulation is top notch as well, as the diesel engine noise can barely be heard in the cabin even at higher speeds.

The seats are comfortable in all four rows, but the catch is that the amount of space for occupants decreases as we move from the front to the back, which makes the last two rows ideal only for small-to-average sized individuals.

Powering the all-new Kia Carnival is a 2.2-litre turbo diesel engine mated to an 8-speed automatic transmission which is controlled by an electronic shifter. The powertrain produces 199 hp and 440 Nm of torque from just 1,750 – 2,750, which makes it quite quick for its size.

For a vehicle that measures more than five-metres in length and weighs more than two-tonnes, the Kia Carnival handles superbly well with great composure. Although you can still feel the weight shifting while cornering, there is minimal body roll.

As mentioned earlier in the article, the level of comfort and refinement is top notch, the steering is weighted just right, and there is just so much power available at the press of the accelerator pedal.

Despite the massive size of the Carnival, the level of visibility is high thanks to the large windscreen, windows, mirrors, and all the cameras fitted around the MPV, which makes it less stressful to drive it through narrow spots like parking lots.

The only thing we don’t like about the Carnival is that it lacks a few features that are quite necessary for a vehicle of its type these days, namely Automatic Emergency Braking, Front Collision Alert/Mitigation, and Adaptive Cruise Control.

However, we were told that a locally assembled version of the Kia Carnival is on the way, in which we hope we can find the missing few features that would make it complete.

Overall, we really enjoyed our stint with the all-new Kia Carnival both at the driver’s seat and as an occupant.

Besides the few missing safety features, it is safe to say that the 11-seater has everything that one would expect in a people-mover, ranging from a powerful engine, good ride and handling, a comfortable, refined and well-equipped cabin, good fuel economy, a solid audio system, and last but not least, good looks. The icing on the cake is of course, the competitive price tag of RM196,340.