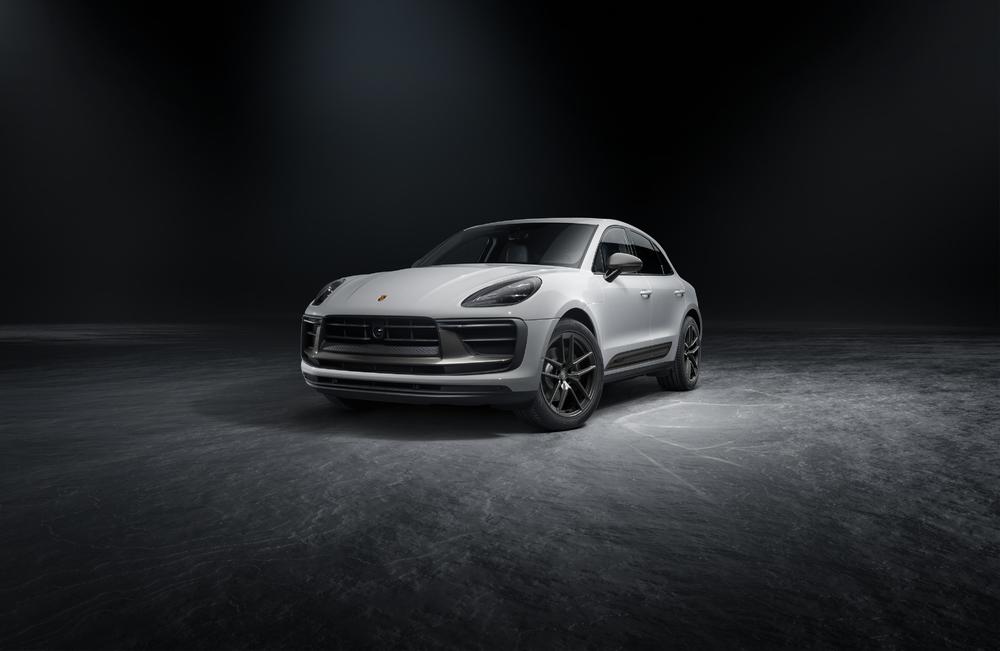 Porsche has added the Porsche Macan T to the model range. This is the first four-door sports car that will bear the special designation, which was previously the reserve of the 911 and 718 models.

True to the spirit of the Porsche 911 T from 1968, the new Macan T features an incredibly dynamic set-up and a lightweight, two-litre turbo engine, combined with an athletic design and a range of standard equipment that is ideal for a sporty driving style. This concept positions the Macan T between the Macan and the Macan S.

Powering the Porsche Macan T is a 2.0-litre, four-cylinder turbo engine that produces 265 PS and 400 Nm of torque. Compared to the 2.9-litre biturbo V6 engine in the Macan S and GTS models, the powertrain in the Macan T weighs 58.8 kg less on the front axle. This gives the vehicle an excellent start-off performance and optimum cornering ability.

As is generally the case with the compact SUV, the engine is coupled with a fast-switching seven-speed dual clutch transmission (PDK) and the Porsche Traction Management (PTM) all-wheel drive system.

When fitted with the standard Sport Chrono Package including the mode switch and Sport Response button on the steering wheel, the Macan T accelerates from 0 to 100 km/h in 6.2 seconds and reaches a top speed of 232 km/h.

The Macan T is the only Porsche model to feature steel suspension with Porsche Active Suspension Management (PASM) as standard, combined with the body being lowered by 15 mm.

The Porsche Traction Management (PTM) has also been adapted to the driving demands of the Macan T and has been specially designed with a rear-wheel bias.

Adding adaptive air suspension with PASM and lowering the body by a further 10 mm is also an option – a new feature for Macan models with four-cylinder engines.

Porsche Torque Vectoring Plus (PTV Plus) can also be added: the system has been adapted to the dynamic characteristics of the T model and further sharpens the driving dynamics.

Design elements painted in Agate Grey Metallic on the front, flank and rear of the Macan T differentiate the vehicle from other models in the series. The exclusive contrast colour can be seen on the painted front trim, exterior mirrors, side blades, roof spoiler and logos on the rear.

Sports tailpipes and side window trims in Black (high gloss) are included as standard and the side blades feature the ‘Macan T’ logo in Black. Twenty-inch Macan S wheels, exclusively in dark titanium, come as standard. Customers can choose from a range of 13 plain, metallic and special colours for the exterior.

Inside, the standard, eight-way electrically adjustable heated sports seats feature exclusive upholstery based on the Black leather package. The centres of the front seats and the outer rear seats are delivered with the Sport-Tex Stripe pattern and the front headrests each have an embossed Porsche crest. The contrasting colour from the exterior continues inside the vehicle in the form of decorative silver stitching on the seats, headrests and steering wheel.

Standard equipment also includes a multifunction GT heated sports steering wheel and the Sport Chrono stopwatch in the upper part of the dashboard. The door entry guards come in black aluminium as standard and feature a Macan T logo.

The Macan T also benefits from all of the new elements of the model generation revised in summer 2021, such as the new centre console with its sophisticated glass-look and touch-sensitive surface, as well as the fully networked Porsche Communication Management (PCM) system with a 10.9-inch touch screen and online navigation as standard.