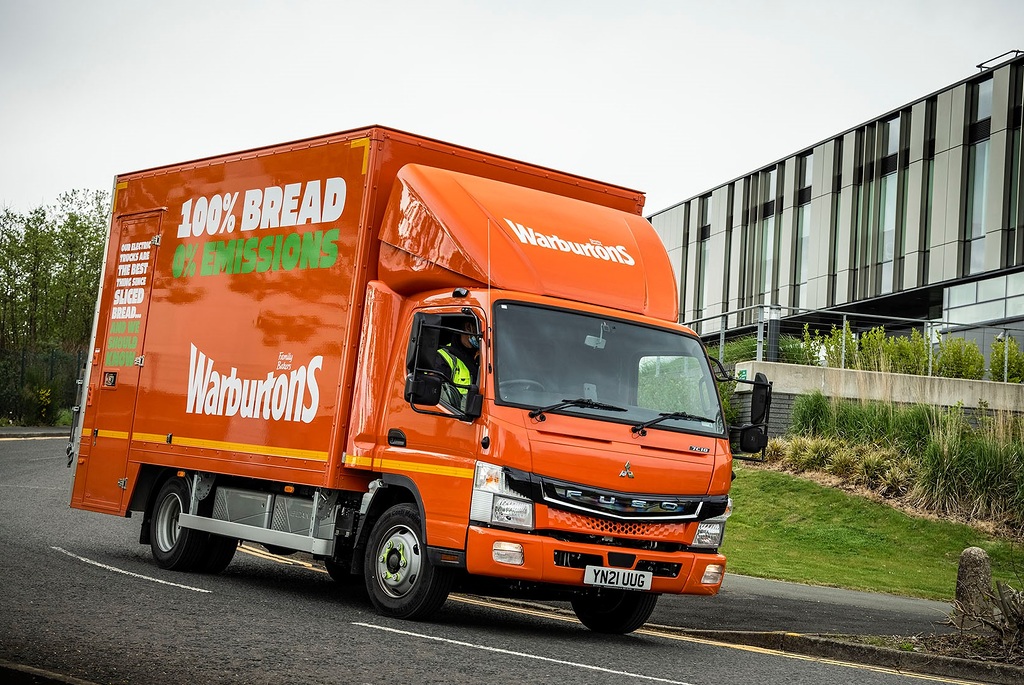 Daimler today announced that it has now delivered more than 250 units of the all-electric Fuso eCanter truck around the world since the beginning of small series production in 2017.

The Fuso eCanter is Daimler Truck’s first all-electric light-duty truck in small-series production, capable of carrying 7.49-tonne vehicle with a range of over 100 km, a top speed of 80 km/h, and an output of 129 kW.

In the UK, a company called Warburtons recently grabbed another slice of the EV action with the locally-emission free Fuso eCanter.

The UK’s largest bakery brand uses the light-duty truck already early in the morning, setting of at 4am each day from Warburtons’ Bolton bakery to deliver fresh bread to about 25 different customers, mainly in the central Manchester area.

Proving its versatility, the Fuso eCanter is now even on duty as an electric beer truck in the Netherlands.

In July, the famous Dutch brewery Heineken received a modified version of the eCanter with a special tank mounted on the back that can be filled with up to 3,000 litres of beer.

The brewery uses the light-duty truck for the inner-city distribution of beer to local bars in Amsterdam.

During the second quarter, DB Schenker, largest electric fleet customer of Fuso, has taken further deliveries of the eCanter.

This concludes a larger order over 36 vehicles in 11 European countries announced last October. In Italy, for example, two trucks have been added to the DB Schenker fleet in Milan, signifying yet another market entry for the eCanter in Europe.

The success of the eCanter also continues in its home market in Japan, where two units of the Fuso eCanter were delivered to Shikoku Meitetsu Transportation in July.

Here the light-duty trucks are in charge of general cargo transportation in Matsuyama City. Making e-Mobility history, they represent the first electric trucks in the Shikoku region.

Another milestone celebrated in July is the launch of the eCanter in yet another new market: New Zealand. Earlier this year, Fuso New Zealand was granted co-funding by the Ministry of Energy and Resources for operational trials of the eCanter.

Five eCanter trucks have since been deployed in the Auckland area for an extended test period. Since July, Genesis Energy Limited, a leading power supplier in New Zealand, uses the country’s first eCanter in customer operations for deliveries in its fleet of around 110 trucks.