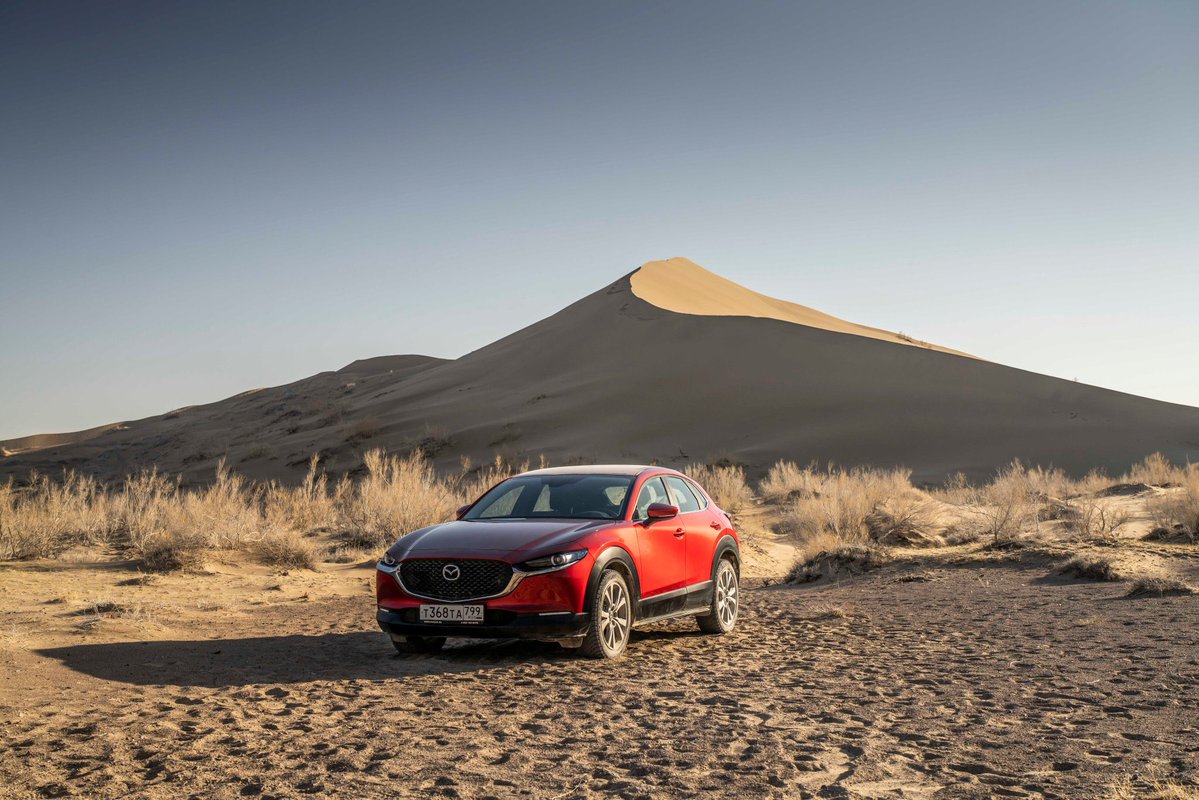 As much as urban SUVs claim to be sporty, active, rugged and what not, not all of them are actually as capable as they claim to be.

More often than not, these crossovers are just jacked up versions of another sedan or hatchback in the brand’s portfolio that were built to function in urban surroundings and maybe an itsy bitsy bit of gravel and uneven surfaces.

However, there are also some models that are more capable than we think, such as the Mazda CX-30, thanks to the i-Activ all-wheel drive system.

The CX-30 and its all-wheel drive system was just put to the test as the SUV was driven from Eastern Kazakhstan to the border of China through more than 800 km of some truly challenging surroundings.

Check out the video to see how the CX-30 conquered the expedition:

In its centenary year, Mazda’s latest challenging drive event has seen the Mazda CX-30 and its all-wheel drive system put to the test with a 520-mile drive across Eastern Kazakhstan to the border of China, taking in sections of the legendary Silk Road trading route to experience the barren beauty of remote central Asia.

Mazda’s love of using a drive to challenge man and machine is as strong today as it was in 1936 when a group of pioneers set out to demonstrate the durability of Mazda’s first vehicle – a three-wheeled open truck called the Mazda Go. An early example of Mazda’s willingness to take on an ambitious drive, five Mazda-Go models (type KC and DC) set out from the southernmost tip of Japan’s main island chain, and showcased the Mazda Go over 1,680miles of dusty, muddy and backbone-rattling trails, arriving in Tokyo 25 days later. The publicity significantly boosted sales and raised the company’s profile, something Mazda would aim to repeat with later heroic drives.

In 1977 to promote the first-generation Mazda 323, a pair of 323 hatchbacks made the 9,320-mile journey from Hiroshima to their European premiere at the Frankfurt Motor Show. Incredibly at the height of the Cold War, the two 323s drove through the Soviet Union, tackling poor roads and tough conditions to highlight the all-new hatchback’s reliability even before it went on sale. The famous 1977 expedition was echoed in 1990 when six Mazda vehicles (626s, 323s and E2200 vans) drove from Hiroshima to Mazda’s German headquarters in Leverkusen, this time through the dissolving Soviet Union. While in 2013, several third-generation Mazda3s repeated the factory to Frankfurt Motor Show excursion, driving through Russia, Belarus and Poland.

Inspired by these challenging drives and public vehicle tests, today’s Mazda Epic Drive media events, allow journalists to experience challenging roads, amazing scenery and unique adventure from behind the wheel of a Mazda. Whether it’s lapping Iceland in an MX-5, savouring the twisting tarmac and volcanic beauty of the mid-Atlantic Azores in a Mazda2 or exploring the wonders of extreme road engineering through the tunnels, bridges and mountain passes in Norway – the modern Mazda epic drive delivers incredible journeys to media, at the same time as highlighting the driver-focused engineering that Mazda is known for.

Like the 2018 crossing of Lake Baikal with CX-5s, the 2020 Mazda CX-30 Epic Drive in Kazakhstan allowed for the perfect demonstration of Mazda’s i-Activ all-wheel drive system. Featuring Mazda’s new-generation Skyactiv-Vehicle Architecture, the CX-30’s evolved generation of i-Activ AWD works in harmony with G-Vectoring Control Plus (GVC Plus) to control torque distribution between the front and rear wheels, to deliver an even more engaging driving experience.

Newly adopted friction-reducing technologies include a rubber damper inside the power take-off unit that greatly reduces fluctuations in input torque sent to the rear-wheel-drive unit, and a new setting that applies a slight difference in the deceleration ratio between the power take-off and rear differential. By quickly adjusting torque distribution only when necessary, the system features positive response and enhanced real-world fuel economy. The rear differential reduces mechanical loss by adopting ball bearings and the use of low-viscosity oil, along with a design that stores oil in the upper part and supplies just the necessary amount where and when required. Acting in combination, these measures increase the precision of the AWD control unit while significantly reducing overall mechanical losses.

At the beginning of a turn, the AWD system will maintain the existing front/rear torque distribution to prioritise better turning response through the GVC unit’s engine torque control. After the initial turn-in, the AWD system gradually increases the amount of torque sent to the rear wheels to realise neutral steering and more stable vehicle motion. Harmonisation with GVC also substantially improves rear torque response and linearity with respect to the driver’s accelerator inputs. When accelerating, more torque is distributed to the rear wheels, and more to the front wheels when decelerating, maximising the traction performance of all four tyres. It also improves controllability, so the vehicle responds faithfully to the driver’s intentions when engaging in active steering.

An all-wheel drive system designed to deliver real-world flexibility, the 520-mile Kazakhstan Epic Drive route offered a real mix of driving conditions to put it and the CX-30 to the test – from city streets to modern dual carriageways, to rutted tarmac and off-road gravel tracks this drive had it all.

Starting in Almaty – Kazakhstan’s biggest city located on a plateau in the shadow of the mountainous Trans lli Alatau range in Southern Kazakhstan close to the border with Kyrgyzstan – the CX-30s left the modern heart of the city taking on ruthless traffic jams on the way out of the sprawling city and onto the modern A3 highway heading towards the Aityn Emel National Park. Here the CX-30s headed away from tarmac roads onto gravel roads for a dusty and challenging drive to the famous Singing Dune. While not an outright off-road SUV, the CX-30’s AWD system ensured excellent traction on the low grip Kazak National Park roads.

From the stunning 150m Singing Dune – named due to the way the winds and moving sands create an eerie almost chorus like sound-  the route headed back out of the sub-desert plains with their roaming camels to the town of Zharkent, which is just a stone’s throw from the Chinese border at the South Eastern edge of this vast country. On day two the Kazakhstan Epic Drive route took the cars south towards the Charyn Canyon and more challenging gravel roads through a series of incredible canyons that look strangely familiar to the wilds of Nevada yet sit in the heart of remote central Asia. After this the route headed west back towards Almaty skirting the vast Kapshagay Reservoir.

Exclusively matched with the 180ps Skyactiv-X engine and offered with a choice of automatic or manual transmissions, all-wheel drive CX-30s are available in Sport Lux, GT Sport and GT Sport Tech trim, while Mazda’s i-Activ AWD system is also available on GT Sport Tech Skyactiv-X Mazda3 hatchback, again with a choice of transmission. Step up to the Mazda CX-5 and all-wheel drive is offered matched to the 184ps Skyactiv-D engine in both Sport and GT Sport models.

Across, the Mazda CX-30 and Mazda CX-5 SUV range, and with the flagship GT Sport Tech Mazda3 hatchback, Mazda’s i-Activ all-wheel drive offers the security and reassurance of four-wheel drive grip combined with fuel-efficiency and improved driver engagement wherever you drive.