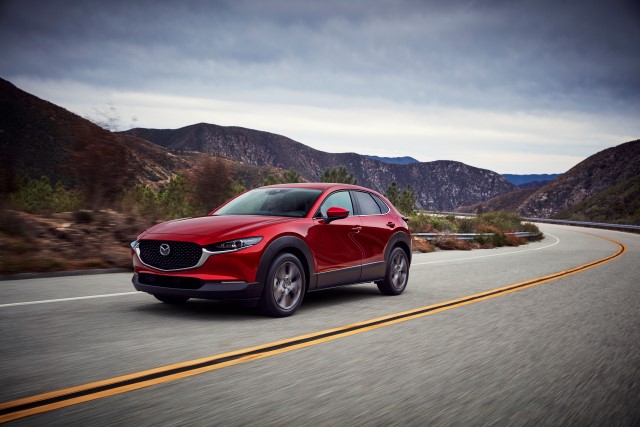 The All-New Mazda CX-30 has been officially launched in Malaysia, filling in the gap between the CX-3 and the CX-5.

On the exterior, the overall design of the CX-30 portrays the releasing and diffusing of energy built-up from the nose and the front fenders though to the rear tires in a single motion to convey a sense of strong forward motion.

Other exterior refinements include a lower body with sleekly flowing proportions of a coupe, as well as LED lights all around.

Inside, the cockpit is symmetrical and firmly centered on the driver, with all three meters in the meter cluster and the center display correctly angled towards the driving position, giving the driver an enhanced sense of unity with the vehicle and an even easier operation.

A secondary, wing shaped hood is fitted to the upper area of the dashboard. Running horizontally from the top of the meter hood to the end of the door trim on the passenger side, it generates an airy atmosphere that give the cockpit an expansive feel, as well as adding to the front passenger’s feeling of relaxation, comfort and security.

Stitching on the edge of the hood is one more expression of the CX-30’s refined interior quality. The wide floor console groups the shift lever, cup holders and commander control forward in a ‘control area’ close to the driver for convenient operation, while the gently curved knee rest behind create a warm, contrasting atmosphere.

The shift panel has an evolved version of Mazda’s ‘two-layer molding’ technology originally developed for the new Mazda3. Light striking the deep smoke-gray panel reveals a metallic pattern engraved in the base later to accentuate CX-30’s atmosphere of fine detailing and advanced character.

Luggage capacity is a generous 430 litres, enough to simultaneously accommodate a large, global-standard baby carriage and a carry-on bag.

The liftgate opening is 1,020mm wide, while the height of the flip is a relatively low 731mm, making it easier to load and unload heavy or bulky cargo.

The Active Driving Display, meters and center display were all redesigned to present information in a simple fashion, while the fonts used were unified to create a pleasing and consistent look.

Where infotainment is concerned, the CX-30 adopts an 8.8-inch wide-screen center display, offering simplified operation that requires only the use of the commander control, it also features a new intuitive guidance system that makes the commander control easier to operate.

The standard audio system features a 3-way, 8-speaker configuration with 3L woofers mounted at the sides of the cowl, 2.5cm tweeters on the left and right sail garnishes and 8cm squawkers on the upper section of the front and rear door trim.

Under the hood, the CX-30 gets two engine options – the latest Skyactiv-G 2.0 gasoline engine and a 1.8-litre SKYACTIV-D turbodiesel.

While the former makes 162 hp and 213 Nm of torque, while the new diesel engine produces 114 hp and 270 Nm of torque. All variants are paired with a six-speed automatic transmission that delivers power exclusively to the front wheels.

In the area of active safety, CX-30’s i-Activsense, is available on the CX-30 High variants, while further evolved technologies to help prevent accidents through advanced brake control enhance the omnidirectional sensing capability Mazda is pursuing.