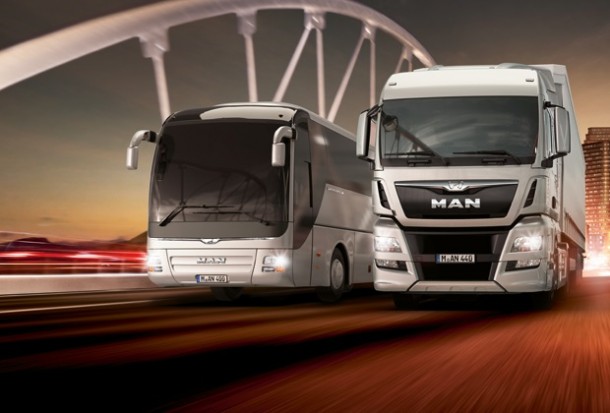 The cab paint shop and the new central building of the MAN Development Center are indicative of the commercial vehicle manufacturer continuing to invest in its main plant in Munich.

The Company has vowed to improve efficiency across all divisions while also rejigging its international production network as part of its program for the future. Each site received a clear and independent profile as a result, which went hand in hand with a hefty investment to modernize the site in question and perform capacity adjustments. The Munich-based commercial vehicle manufacturer will have invested around €2.4 billion in modernizing its sites by 2020.

The Company is to invest approximately €1.1 billion in Munich alone between 2015 and 2020 with the aim of making its main plant, which produces heavy-duty trucks, fit for the future. Along with building a new CHP plant and other projects like the expansion of the body shop, the Company has now put a new paint shop into operation attended by Munich’s deputy mayor, Josef Schmid.

“The new base coat line has a giant hall, which is symbolic of all the measures we have initiated here in Munich over the last few years. While under construction, the building’s cranes and scaffolding were a reflection of the relentless optimism prevailing at our Company, as well as its forward-looking approach.

The construction itself was an amazing feat of logistics. I am now pleased to say that the cab paint shop is working as planned, making a major contribution to protecting the environment here in Munich,” Joachim Drees, member of the Executive Board of MAN Truck & Bus and MAN SE, pointed out.

Josef Schmid, deputy mayor of the city of Munich, was clearly delighted as he pointed out: “Munich is an economic hub that thrives on its one-of-a-kind diversity. MAN is of key significance for the city’s industrial sector. In investing substantially in its Munich site, MAN is making a long-term commitment to the Bavarian capital, showing just how attractive Munich is for large companies.”