Ford has improved the aerodynamic performance of its F-150 pick-up truck. As CAFE fuel economy targets become stricter, the OEM has had to make one of its most important vehicles in North America more efficient. The OEM has already reduced the vehicles weight by 300kg by adopting an aluminium structure, but reducing drag has also been a crucial part of the development programme. Ford’s exterior design manager Brad Richards said: “The truck’s sharp, boxy shape gives it a tough appearance, but actually the key to the design is aerodynamic efficiency getting the most out of the shape. We made F-150 look tough and capable, while also reducing wind resistance.”

A large amount of time was spent wind tunnel testing, allowing designers and engineers to see where they could gain greater aerodynamic efficiencies. Flush-mounted windshield eliminates need for moulding that would disrupt smooth airflow, the tailgate top is designed to act as a spoiler, giving air that flows off the roof a place to land before trailing off, reducing turbulence at the rear.

The cargo box is narrower than the cab, with no reduction in box volume, which enhances airflow, while a trim piece prevents air from getting trapped between cab and box. Rear corners including taillamps are precisely angled so air breaks off cleanly, reducing turbulence behind the truck. The duct under the headlamp channels air through to the wheel housing and reduces the wake generated from the wheel.

“Testing in the wind tunnel helped us fine-tune a happy medium between styling, aerodynamics, engineering and cost. We learned where we could push shape and design to reduce drag, and where to stop when we weren’t gaining anything,” said Richard. 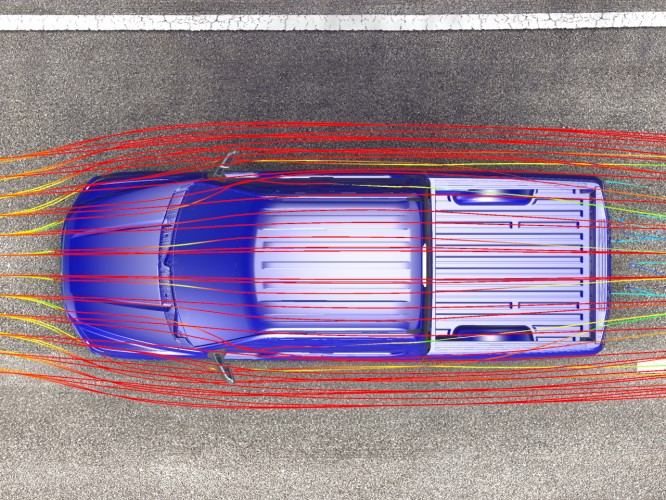